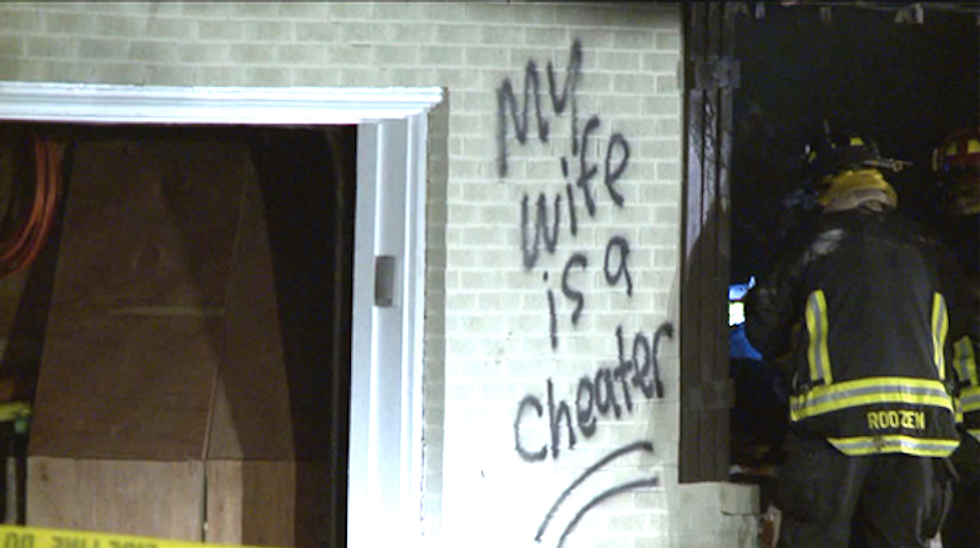 Firefighters in Arvada, Colorado arrived at the scene of an explosion early Tuesday morning to find "My wife is a cheater" scrawled on a house's exterior.

According to the Denver Post, police have arrested a man in connection with the blaze, but have declined to release his identity.

Emergency crews arrived on the scene at about 1:30 Tuesday morning after receiving a 911 call about an explosion at a residence.

Deputy Fire Marshall Deanna Harrington told the Post, "Upon their arrival, they were faced with a lot of fire that was coming from the front of the house as well as the back of the house."

"There was debris in the street -- patio furniture," she said. The home was significantly damaged, but no one was injured and all the occupants are currently accounted for.

The phrase "My wife is a cheater" was spray-painted on multiple surfaces around the outside of the house. Officials covered the graffiti with blue tarps.

Arvada Police Department spokeswoman Jill McGranahan said that police made an arrest in connection with the case around 8:30 a.m. and will hold a press conference Tuesday afternoon to discuss further details about the case.