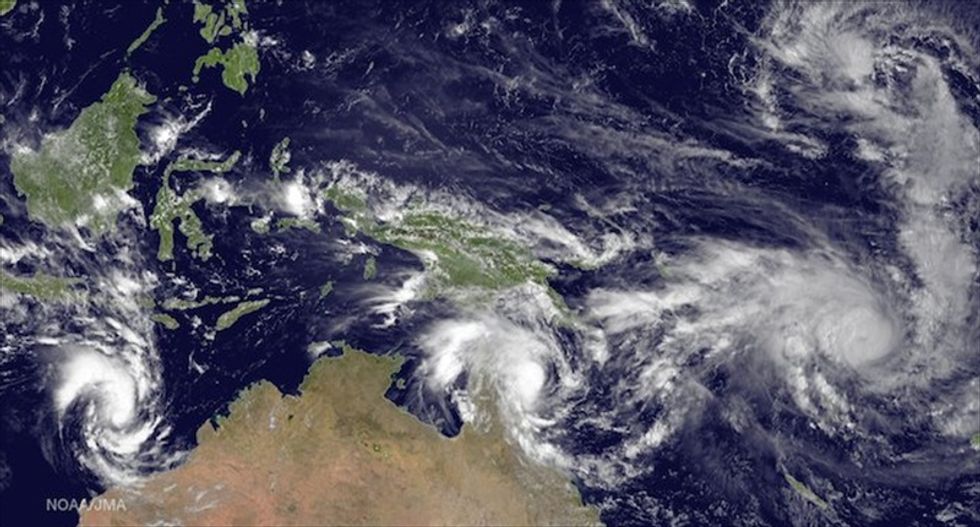 Cyclone Pam (bottom right) and Tropical Depression 3, or Bavi (top right) are two of four cyclones spinning in the oceans around Australia. Image via NOAA.

Weather geeks have been fixated this week on an unusual meteorological phenomenon over the Pacific Ocean: Two tropical cyclones are spinning directly across the equator from each other.

But these “twin” cyclones aren’t just a satellite spectacle, they could give a jolt to the El Niño that was officially declared by U.S. forecasters last week after months of sitting on the fence. This El Niño is a weak one, expected to have little impact on weather in the U.S. The two storms that could provide a boost, however, are Cyclone Pam, churning over the South Pacific at about 14 degrees south latitude, threatening the islands of Vanuatu and Fiji with strong, damaging winds and storm surge, and Tropical Depression 3 (or Bavi), spinning over the northern Pacific near 10 degrees north latitude heading towards Guam.

Together, the cyclones and El Niño illustrate the interplay between short-term weather and longer-term climate cycles, in this case potentially reinforcing each other. It is unclear, though, whether the cyclones caused a westerly wind burst ramping up the El Niño, or if it was the El Niño pattern that spawned the cyclones.

El Niño is a climate condition marked by unusually warm ocean waters in parts of the tropical Pacific, but it has impacts on weather all over the globe. By influencing atmospheric circulation, a strong El Niño can bring unsusually wet weather to the southern portions of the U.S. in the winter months, as well as drought to places like Australia and Brazil. It also tends to tamp down hurricane formation in the Atlantic Ocean, while amping up storms in parts of the Pacific. The weather connections are less strong in spring, but if this El Niño strengthens enough over the spring and summer, it could have ramifications next winter.

Where the two cyclones come in is the winds associated with an El Niño. Normally, the tropical Pacific features a pool of warm water in the west and cooler temperatures to the east, where cold waters well up from deep off the coast of South America. The prevailing easterly trade winds keep this temperature pattern in place. When an El Niño occurs, the winds slacken and can even reverse to blow from the west. That sends the warm waters spilling eastward, the hallmark of an El Niño. (When a La Niña occurs, the easterlies grow stronger and intensify the east-west temperature contrast.)

Bavi, because it is in the Northern Hemisphere, rotates counterclockwise, while Pam, rotates clockwise in the Southern Hemisphere. In the portions of the storms nearest the equator, the winds in both storms are from the west.

“We have an impressive westerly wind burst on the equator right now,” Michelle L’Heureux, an El Niño forecaster with the National Oceanic and Atmospheric Administration, said.

“The winds are certainly tied in with these twin cyclones straddling the equator.”

Those westerly winds could help push the warm waters on the western side of the basin further east and strengthen what is right now only a very weak El Niño.

The El Niño forecasters expected the increase in westerly winds according to their models and it is “something we like to see when we're saying an El Niño is in place and forecasted to continue,” L’Heureux said.

What’s hard to determine is whether the cyclones created the wind burst or the other way around, as westerlies are also conducive to cyclone formation in that area. Both could also be linked to a climate pattern called the Madden-Julian Oscillation (MJO), which features alternating areas of enhanced and suppressed rainfall that move from west to east across the globe. When enhanced rainfall is over the western Pacific, it tends to whip up the westerlies that can feed cyclones and the El Niño. And this round of MJO could be record-breaking.

But it’s hard to predict how big an impact this push of winds will have on the El Niño.

“How much this westerly wind burst will energize El Niño is the big question mark,” L’Heureux said.

Forecasters are wary of a repeat of last year when a relatively strong MJO and a very strong surge of warm waters, called a Kelvin wave, had some predicting a repeat of the monster El Niño of 1997-1998. Then the event fizzled.

“It's still March, [and] as we know from last year, Kelvin waves are not a slam-dunk predictor of [El Niño],” L’Heureux noted.