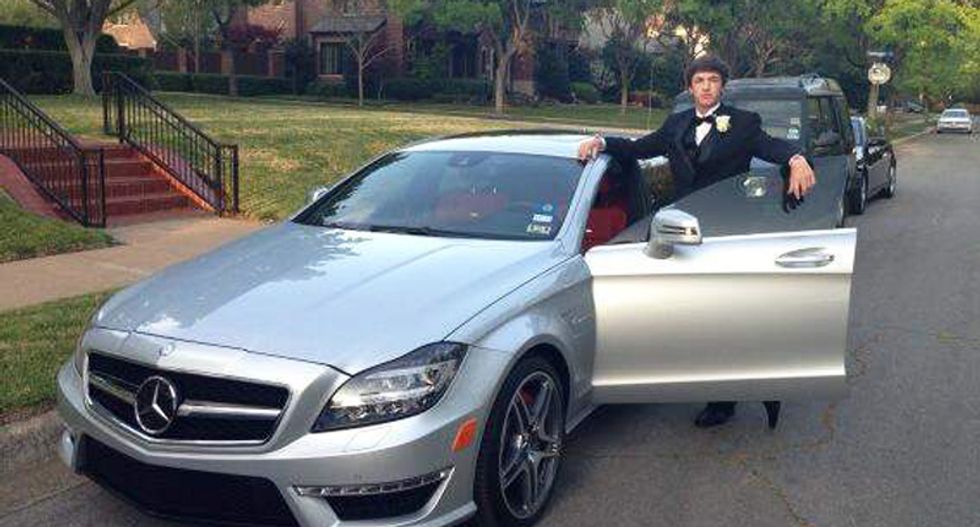 In a time of Facebook, Twitter, Snapchat, Instagram, and a few other social media thingy-mcApps that allow us to share every waking moment of our lives with others because we are all so amazingly interesting, it took a surprising long time for the identities of the two OU SAE-bros who led their frat brothers and their dates in a merry old racist sing-along to be revealed.

Undoubtedly it had to do with the fact that all white entitled Bieber-haired preppy douchebags look alike and, as a white person, it is totally not racist for me to say that.

The two strapping young Leaders of Tomorrow with the destined-to-be-in-a-frat-by-virtue-of-their-names are Parker Rice and Levi Pettit. For those who had Chad or Todd in your office pool...  so close, and my condolences.

In a time-honored tradition handed down from generation to generation of white men who come from affluent families with the means to make "indiscretions go away," the two young men, both of whom are old enough to enlist in the military and serve their country, have manned up and apologized.

And by "manned up and apologized" I mean they have issued -- or had issued for them -- artisanal hand-crafted statements lovingly and carefully composed by family attorneys and "crisis managers."

So, it's all good now. Let the healing begin. Post-racial America is finally at hand.

Notable in both statements is the word "mistake," and not in the "It was a mistake that I got caught being my white privileged drunken unaccountable-for-anything dumbass self" kind of way.

Here is an excerpt from Parker Rice's mea culpa -- once-removed  since it was delivered by dear old dad Bob to the media:

"I am deeply sorry for what I did Saturday night. It was wrong and reckless. I made a horrible mistake by joining into the singing and encouraging others to do the same."

"On Monday, I withdrew from the university, and sadly, at this moment our family is not able to be in our home because of threatening calls as well as frightening talk on social media."

After admitting that it was the demon rum that made him sing the song while also saying that is no excuse -- but still, just sayin'  ya know --  we learn that it obliterated everything he learned at Jesuit prep school ("Men for Others"), and that he is concerned for his fellow frat bros.

Rice then moves on to my personal favorite : the 'teachable moment':

“For me, this is a devastating lesson and I am seeking guidance on how I can learn from this and make sure it never happens again. My goal for the long-term is to be a man who has the heart and the courage to reject racism wherever I see or experience it in the future."

Your turn in the confessional, Levi Pettit-- as delivered by parents Brody and Susan Pettit on a website designed for apologizing for their dumb son's high-spirited hijinks:

As parents of Levi, we love him and care for him deeply. He made a horrible mistake, and will live with the consequences forever.

But wait, it gets better, because deep down he's a good boy -- totally not a racist -- and, well, you can guess the rest:

However, we also know the depth of our son’s character. He is a good boy, but what we saw in those videos is disgusting. While it may be difficult for those who only know Levi from the video to understand, we know his heart, and he is not a racist. We raised him to be loving and inclusive and we all remain surrounded by a diverse, close-knit group of friends.

And if the mention of the "diverse, close-knit group of friends" didn't make you roll your eyes so hard you detached a retina, there is  this:

We ask that the media and public please respect our family’s privacy as we come together to heal and determine next steps.

Victims of sexual assault need time to "heal." Soldiers who served multiple tours of duty in Iraq and Afghanistan and suffer from PTSD need time to "heal" -- if that is even possible. Families of unarmed African-American teenagers who are gunned down in the street by trigger-happy cops who know there will be no repercussions in a country where black lives don't matter --  they need time to "heal" although that pain will never ever go away.

But the families of privileged young men who think it perfectly fine to lead drunken sing-alongs to songs about lynching "niggers" on a party bus?

They don't get to plead for time to "heal" while at the same time explaining that their son is actually a swell kid of sound character who deep deep down has a really  good heart... just like we raised him. Hooray for us.

He's a racist, and racism begins at home.