Jon Stewart drops the mic on Fox: Stop harping on Ferguson protests until you apologize for flogging Benghazi 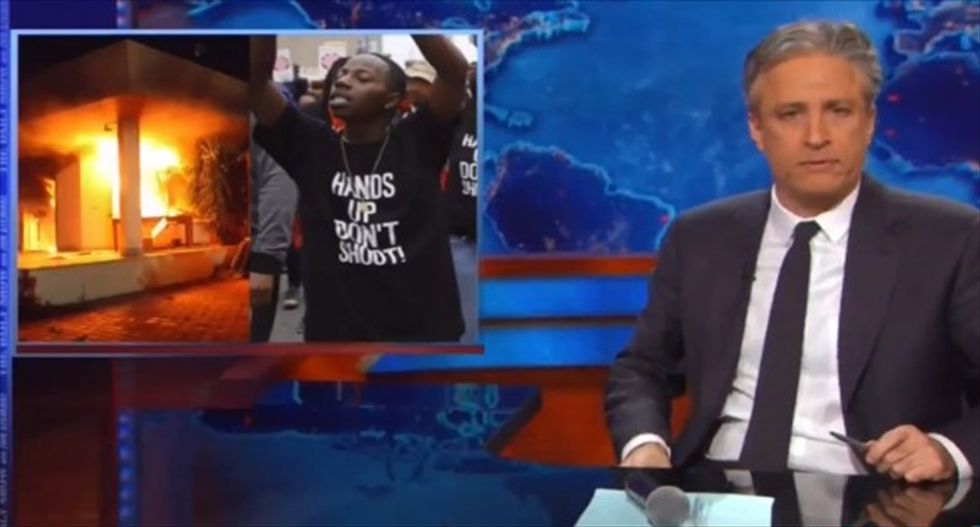 Daily Show host Jon Stewart hammered Fox News on Thursday for hypocritically demanding that "Hands Up Don't Shoot" protesters apologize after refusing to admit that it was wrong in reporting on the Benghazi embassy attacks.

"They demand accountability for anger and divisiveness whilst holding themselves entirely unaccountable for their anger and divisiveness. For two years, they used Benghazi as shorthand, as a symbol for the whole concept of a corrupt, lying, tyrannical -- possibly murderous -- Obama White House," Stewart said. "Kind of how other people used 'Hands Up Don't Shoot' as a symbol for systemic racism. There's really only one difference between the two phenomena: systemic racism actually exists."

And with that, Stewart literally dropped the mic.

Stewart pointed out that, while Fox hosts have focused all of their attention on a Justice Department report finding no evidence that Michael Brown had his hands up when he was shot and killed by Officer Darren Wilson last year, they have pointedly ignored that the department also found extensive evidence that Wilson's colleagues on the Ferguson Police Department systematically targeted the city's black residents for citations and traffic stops -- a pattern of discrimination which lent itself to a flashpoint incident like the shooting.

And after the report was released, Stewart said, Megyn Kelly -- who called "Hands Up Don't Shoot" part of a "tsunami of misinformation" -- did not ask committee chair Rep. Mike Rogers (R-MI) about it when he appeared on her show two weeks later.

"Not f*cking once," Stewart said.