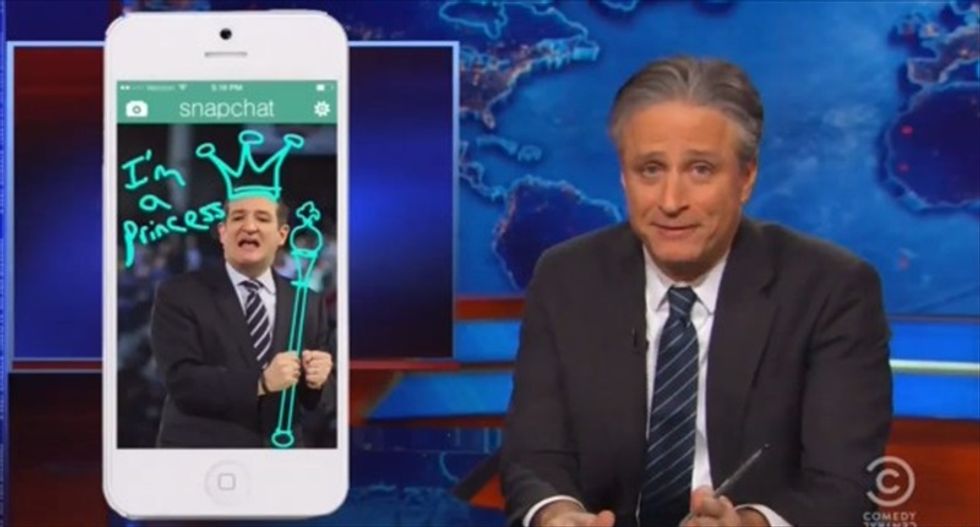 Daily Show host Jon Stewart broke down the discrepancy between Sen. Ted Cruz's (R-TX) small-government message on Monday and his weird request for the captive audience there.

"Let me clarify this a little bit: students at Liberty University were required to attend a partisan political speech where a small-government conservative who had just promised he would respect privacy rights, told them if they cared about freedom, text your information to a mysterious address that collects your cell phone number for undisclosed purposes," Stewart said.

Stewart noted that the Liberty students faced fines if they refused to watch Cruz confirm that he would seek the presidency in 2016. (He did, however, give credit to the students who wore shirts supporting Sen. Rand Paul (R-KY) to the event.)

But while Cruz made it seem like a big deal for the students to take out their cell phones during his speech, Stewart said, many of them already had them out anyway.

While giving credit to Cruz for preparing himself for the event, Stewart did seem creeped out that the Tea Party senator would go so far as to rehearse waving and kissing his wife.

"I may owe Mitt Romney an apology," he said. "Even the Mitt Romneytron 3000 didn't have to rehearse waving and kissing."

However, he was quickly corrected by correspondents Samantha Bee and Jason Jones.

"I guess I did," Stewart said, getting a laugh out of Bee.

"How long have you two been married?" Stewart asked.