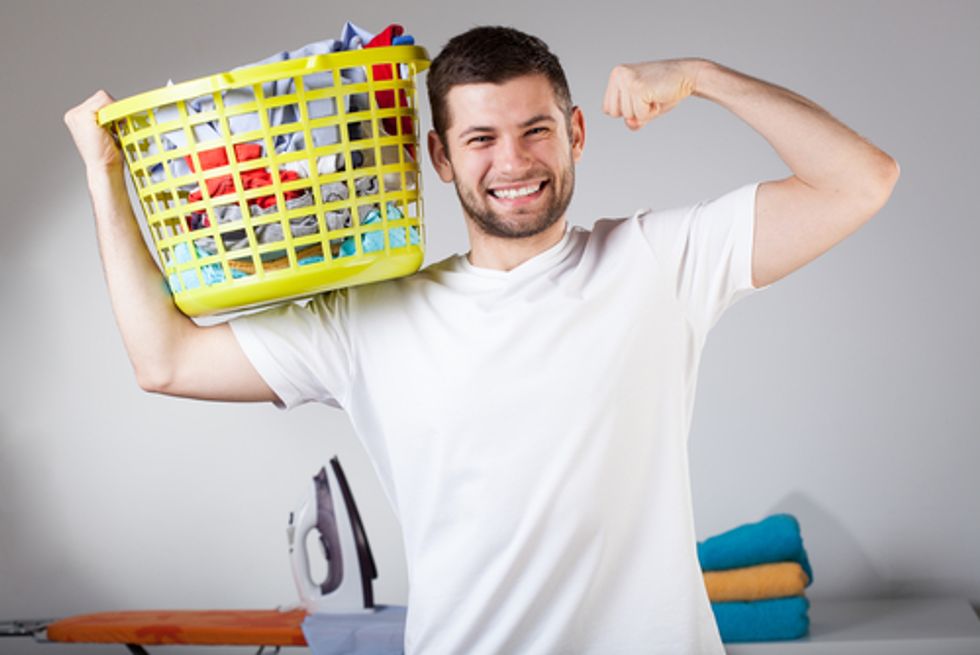 I will say it up front: I don't think there's anything wrong, per se, with Sheryl Sandberg and the Lean In organization rolling out a program encouraging men to be thoughtful about how their personal choices lead to continuing inequality. The housework thing in particular is a bugbear of mine. So many men are dismissive of the impact that having to do more housework has on women and their career ambitions, mostly because, since they're leaving most of the work to their female partners, they have no clue exactly how much work it is. Doing your fair share---and showing some actual curiosity about what that fair share is, instead of passively waiting for her to give you a chore list that you will do half-assed until she gives up and starts doing it all again herself---can do a world to free up some time on women's schedules, time they can use to work on improving their careers or even just doing some stuff for themselves so they aren't so stressed all the time. And it can be done without impacting your life that much. If a household has 8 hours of housework a week, it's not going to be meaningfully stressful for each person to do 4. But once one person is doing 6, that can start to put a cramp on her style.

So that caveat out of the way, I have to say that I agree with practically every feminist who read this passage in Adam Grant and Sandberg's New York Times piece on this issue and cringed:

If that isn’t exciting enough, try this: Couples who share chores equally have more sex. As the researchers Constance T. Gager and Scott T. Yabiku put it, men and women who work hard play hard. One of us, Sheryl, has advised men that if they want to do something nice for their partners, instead of buying flowers, they should do laundry. A man who heard this was asked by his wife one night to do a load of laundry. He picked up the basket and asked hopefully, “Is this Lean In laundry?” Choreplay is real.

This was after a less objectionable paragraph that pointed out that having a husband who doesn't treat you like his servant who does his fair share makes marriages happier. It was the same general idea, appealing to men's self-interest instead of sense of decency and fairness, but at least it featured the idea that women's happiness matters.

But the word "choreplay" pissed a lot of people off, and not because it might the least sexy word ever created. For instance, Jessica Valenti argues that this just feeds another kind of inequality, the expectation that men are entitled to sex:

Leaving the unfortunate coinage of “choreplay”, do we really want to live in a world where men are only cleaning up around the house to get some? In a New York Times op-ed touting the new campaign, Sheryl Sandberg and Adam Grant tell the story of a woman who asked her husband to do the laundry. They write, “He picked up the basket and asked hopefully, ‘Is this Lean In laundry?’” I understand that the anecdote is meant to be charming, but in a culture where men are already taught to feel entitled to women sexually, I don’t find it cute in the least....

It’s those men that we want on our sides. Besides, those men who will only pick up a broom because the faint promise of fellatio is in the offing are not the type of men who are likely that interested in ongoing equality at home. There are but a few men who don’t know that the cultural expectation today is that they’ll do a fair share of the housework; saying that it’ll take a little T&A to convince them to vacuum just reinforces that women are supposed to provide sex and do all the housework in the first place. That’s not leaning in as much as it’s going in reverse.

Point taken. We already have enough single men out there who feel like they are "owed" sex if they take a woman out to dinner, say something nice to her, pretend to be her friend, or give her 45 seconds of pretending to ask her questions after treating her like garbage throughout the date. Having a man inside your house who thinks you owe a blow job because he did what you have to do everyday without any expectation of rewards, sexual or otherwise, is a miserable idea.

Tracy Moore has some good thoughts, too:

Framing pitching in around the house as to a man's sexual advantage continues to emphasize that is out of the ordinary; it frames it as unexpected or innately incongruous and therefore rebellious—to the point that it's hot. No.

Maybe we have to sex everything up to make it seem worthwhile: Pay women equally! They will take one look at their big, hard, paycheck and get so wet 4 u. But in my experience, seeing a man run a vacuum isn't sexy per se. It's the mindset that's sexy—not that he can't wait to be rewarded for his troubles, but that he doesn't want someone he loves to be overburdened with extra bullshit (bullshit that is just as much his responsibility to begin with).

Agreed all around. After reading these fine ladies weigh in, it occurred to me that this framing is not only undermining the cause it wishes to promote---women's equality---but it's also bad for people's sex lives. Because this framing treats sex as if it's a thing women do for men, just one in a long list of services we provide. And so "getting" good sex out of a woman is seen as primarily transactional: You do for her, and she'll do for you. Not only does this reinforce the idea that a man who does a chore is doing "women's" work and requires compensation for it, it treats sex as a chore for women. Milking your man, as it were, so that he doesn't have to do it himself.

But, as Valenti says, "What turns women on is what turns men on: good sex." Sex shouldn't be transactional, unless that's your kink. (In which case, it's really more the fantasy of transactional sex, but you're still doing it for fun.) Sex should be something you do together, for fun. I get that sometimes someone is a little tired and not completely in the mood and they indulge their partner anyway, and that's fine, much like watching a show with them that you usually enjoy but you're not feeling as much tonight for some reason. But that only works if you think of sex generally as a "fun thing we do together" and not as "she is servicing him".

This sex-as-a-service model is why I think---and have argued vigorously---so many women just start checking out of sex in their long-term relationships. If  you start to think of sex as just one more thing you have to do in a day in order to keep the household running smoothly, you're not going to want to do it anymore than you want to do the dishes. If the idea of "buying" more sex from your wife by vacuuming appeals to you, well, the fact that your marriage has a transactional, service-oriented model of sex is probably the reason she's already lost interest in fucking you. So "choreplay" might work initially, but instituting a program in your marriage where you "exchange" chores for sex is probably going to make her feel even more like a household appliance and, over time, even less interested in sex.

Which isn't to say that studies that show that men who do more chores get laid more are wrong. But the reason is likely not because they're instituting a transactional model where they exchange dishes for blow jobs. In fact, it's probably wrong to believe that there's a causal relationship between the number of chores men do and the amount of sex the couple is having. More likely, both the chore level and the sex level are rooted in a common cause: The marriage model is an egalitarian one, where the husbands see their wives as partners, not as servants. If you see your wife as a partner, you do the dishes not to "get" sex, but because you see it as your duty to do your share around the house. Similarly, if you see your wife as a partner, you see sex as a fun, shared activity, not as a ritual milking to keep you from whining. It's the "seeing your wife as a partner" thing that is the causal factor here and both are just symptoms of it. Doing a few more chores isn't going to change your sex life if you still see sex as another lady chore. You have to change your attitude.