Mika Brzezinski insists 'Morning Joe' didn't blame rap for white frat racism: 'That is not what was said' 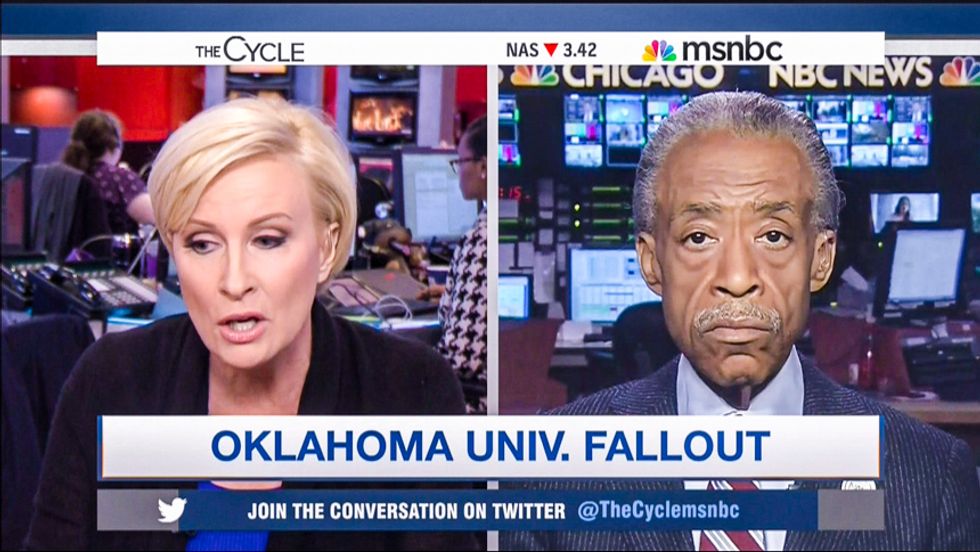 MSNBC host Mika Brzezinski on Wednesday afternoon defended a panel discussion on her Morning Joe show that has been widely interpreted as blaming black rappers for a racist video created by white fraternity brothers in Oklahoma.

On Wednesday morning, co-hosts Joe Scarborough and Mika Brzezinski pointed out that rapper Waka Flocka Flame had decided to cancel a concert at Oklahoma University after members of the SAE chapter were videotaped on a bus singing a racist song.

During the discussion, Brzezinski noted that Waka Flocka Flame's music had also used the n-word.

Scarborough added that white kids were "buying hip hop or gangster rap... and they hear this over and over again."

"So do they hear this at home? Well, chances are good, no, they heard a lot of this from guys like this who are now acting shocked," Scarborough opined.

Brzezinski appeared on MSNBC's The Cycle later in the afternoon to address the controversy caused by the remarks.

"The students in the video are responsible for their behavior. And as we said in our show this morning, it's beyond appalling," she insisted. "On another point, there may be a good conversation to have out there about rap music, hip-hop and lyrics and use of the n-word, and whether or not is should be allowed to be used on where and what form and what platform. But there's no moral equivalency between any lyrics and what happened on that bus. We said that this morning on our show."

Brzezinski added that the Morning Joe panel in no way meant to blame Waka Flocka Flame's "violent racist lyrics" for the racism displayed by the SAE fraternity brothers.

"Maybe that got conflated," she remarked. "But that is not what was said."

MSNBC host Al Sharpton responded by saying that "these are two different issues."

"There were no rappers on that bus," he noted. "These were all white students that were saying this. There's no rap lyrics that even come close to what they said in terms of 'We're not letting the n-word students in our fraternity.'"

"Our concern in the civil rights community, some among other rappers about lyrics -- and concerns Mika and I have talked about because she talks about her daughter [listening to Jay-Z], I don't think they ought to use that as a distraction from the point that all of us are making about that ugliness that we saw in that film from the bus in Oklahoma."

Brzezinski argued the question about rap lyrics "was sort of like the big picture in terms of where we're moving in terms of our society and also how we view art, and what is art and what is dangerous."

"But that's a completely different and fascinating conversation."