Netflix CEO on company's success: Unlike networks, we 'give great storytellers big canvases’ 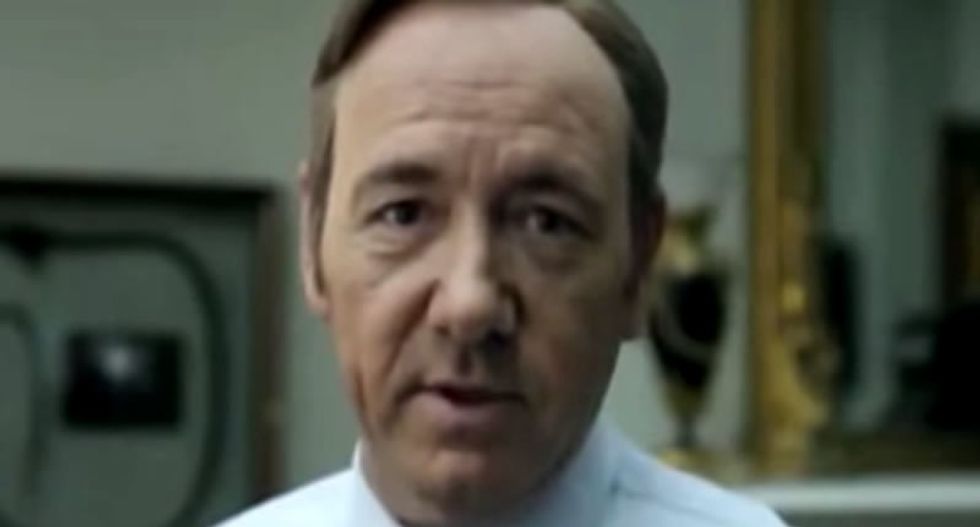 In a bare room called The Crown in a nondescript office in central London, Netflix chief content officer Ted Sarandos, otherwise known as the man who brought us Kevin Spacey’s House of Cards, explains how his on-demand internet streaming service will be “practically global by 2016”.

Founded in 1997 as a mail order video rental business, Netflix is now available in 50 countries and Sarandos predicts this will expand within two years to 200. Yet just 10 people work just off Tottenham Court Road in its grey UK office in the UK, one of the company’s biggest markets outside the US. On the morning of the recent London premiere of House of Cards’ season three, the glitziest thing there, apart from an overly large light fitting, is an industrial grade coffee machine.

With 57 million subscribers around the world – up 13 million in 2014 – Netflix already has almost as many people on its database as the British census compilers. Which neatly gives the man who gained valuable consumer behaviour insights while working in a strip-mall video store in the early 80s something in common with the Queen, the subject of The Crown, Netflix’s first UK production and the reason for the room’s name.

The £100m series, which will span Elizabeth II’s six decades on the throne starting from the day her father died, is described by Sarandos as “one of our most ambitious programmes yet”. He expects The Crown – based on screenwriter Peter Morgan’s hit West End play The Audience, which has just opened on Broadway – to have global appeal despite its very local roots when it launches in 2016. “This is a universal story about her life and the struggle between private and public,” says Sarandos.

Universal themes of power, love or loss allied to high production values are behind many of Netflix’s hit shows, which include Orange is the New Black and Better Call Saul. This universality means, for example, that House of Cards, which focuses on White House machinations, is hugely popular in China, while Lilyhammer, about a New York mobster in hiding in rural Norway, is a hit in Mexico. “This is a show which is mainly in Norwegian,” hoots Sarandos, his gravelly voice rising in one of the frequent bursts of laughter that punctuate our chat, whether at his own jokes or some astonishing fact.

He has every reason to be grateful of course for it is Sarandos who is credited with boosting if not creating our current mania for high-quality multi-episode drama after he decided to use proceeds from the rental business to commission original fiction for television. He chose television rather than film because he felt the latter, with its blockbuster mentality, had become too global and “less intimate” – a perfect term for the sort of television you can watch from a screen while propped up in bed.

Sarandos once called himself a “human algorithm” because of his use of data rather than gut instinct to work out what viewers want, and he has described House of Cards as “generated by algorithm”: while interested in politics himself as an Obama fundraiser married to a former ambassador, he nevertheless used data to work out how many subscribers loved both political thrillers and Kevin Spacey. “Big data is a very important resource to allow us to see how much to invest in a project but we don’t try to reverse-engineer,” he says, adding that commissioning decisions are more like “70% science and 30% art”.

This process is generating a raft of new programming scheduled for 2016 alongside The Crown. With moves into kids’ television and a broader range of drama, Sarandos aims to offer “a little bit of everything” without ever providing news and sport like a traditional multi-genre network.

He believes, for example, there is unmet demand for a fresh type of talkshow, and plans to “reinvent” the weekly format with a new show featuring comedian and presenter Chelsea Handler in early 2016. It will reflect internet viewing habits by not having set slots for interviews. “We can break it up into different segments,” he says. “These are not shows meant for 11.30 when no one is watching them.”

Sarandos has also commissioned The Great Gatsby director Baz Luhrmann to film a 13-episode drama called The Get Down for Netflix, which will focus on late 70s/early 80s New York and the emergence of punk, disco and hip-hop, in his first music-based project since Moulin Rouge. “We like giving great storytellers big canvases,” says Sarandos. The passion Luhrmann has for the topic is in marked contrast to another film director’s foray into internet television. When Woody Allen spoke about his recent deal with Amazon he indicated he wasn’t really sure what he was going to do. “I want a great storyteller to come up with project he really wants to do,” sniffs Sarandos.

He is full of praise for the BBC: “The UK has been very progressive about on-demand and the iPlayer has been a great invention. It has trained a generation of viewers to expect on-demand – unfortunately it trains them to expect free!” He laughs.

Netflix has no intention of “resting on its laurels” and has signed new deals for four films starring Adam Sandler and Judd Apatow’s latest Pee-wee Herman movie. Competition comes from many sources and, having pioneered internet streaming, the company is now almost regarded as the establishment player in the space. “We have to be very careful not to let that happen,” says Sarandos. “It felt for a minute like it was a very short-lived insurgency because people became more and more comfortable with the model – a subscription fee and the ability to use the app on all your different devices.”

Amazon and HBO are clearly among Netflix’s biggest threats. In explaining its decision to launch original programming such as House of Cards, the company’s chief executive Reed Hastings has said it is trying to become HBO faster than HBO can become Netflix.

Last week, HBO announced a new partnership with Apple and the launch of a streaming service, HBO Now. It clearly presents a challenge to Netflix: both target the growing number of homes with fast internet access and no traditional cable or satellite TV subscriptions – roughly 10m homes in the US, half of which are estimated to subscribe to a streaming service.

However, with revenues of $5.5bn in 2014 (up from $4.4bn in 2013) and programming to rival great HBO shows such as True Detective or Game of Thrones, the business that started by mailing out DVDs has secured its place as a major force. It has also changed how we consume television, especially drama.

When House of Cards was launched in London in 2013, Spacey talked about how Netflix reflected a new way of viewing – one hour at a time or all 13 episodes in a big weekend watchathon. Sarandos says this new kind of viewing is “more like reading a novel – some nights you read two pages and fall asleep and other nights you stay up all night to watch”.

Earlier this year, the Conservative Political Action Committee (CPAC) held a conference titled "American Uncanceled." Organizers attempted to showcase how their political opponents are the intolerant, and that conservatives were the true defenders of the ability to speak their minds. But what would happen when House Republicans would vote on a conservative Trump critic? And what do surveys say about how the GOP faithful deal with criticism of Trump, compared to how Democrats deal with critiques of Biden?

A CPAC organizer claimed "The radical left will not tolerate any dissenting point of view." Another organizer argued "contemporary moral panic-mongers are redoubling their bullying to cleanse the culture of what they consider unacceptable opinion, which often, simply means 'conservative,'" he argued. He claimed that the hunted prey includes supporters of Donald Trump. "That is the most un-American thing I can imagine. Our nation was founded on the idea that people who disagree can still be part of a civil society."

Muslims around the world began marking a sombre Eid al-Fitr on Thursday amid rising hostilities between Israel and Palestinians, in the second celebration in the shadow of the coronavirus pandemic.

The three-day festival, which marks the end of the holy fasting month of Ramadan, is traditionally celebrated with mosque prayers, family feasts and shopping for new clothes, gifts and sweets.

Law enforcement officials in Donald Trump's new hometown are preparing for the possibility of the former president getting indicted.