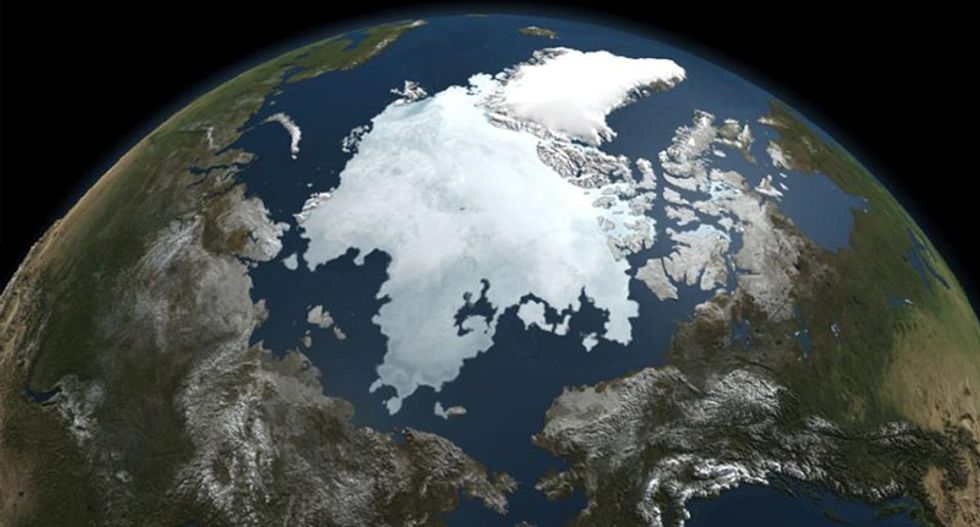 The maximum extent of sea ice observed was 5.6 million square miles (14.5 million square kilometers) on February 25, earlier than scientists had expected, said the report by the National Snow and Ice Data Center.

"It is also the lowest in the satellite record," the NSIDC said.

Below-average ice conditions were observed everywhere except in the Labrador Sea and Davis Strait.

It was also 50,200 square miles below the previous lowest maximum that occurred in 2011.

Environmentalists said the report offered more evidence of worsening global warming, and urged action to curb the burning of fossil fuels that send greenhouse gases into the atmosphere.

"This is further evidence that global warming and its impacts have not stopped despite the inaccurate and misleading claims of climate change 'skeptics,'" said Bob Ward of the Grantham Research Institute on Climate Change and the Environment at the London School of Economics and Political Science.

"The gradual disappearance of ice is having profound consequences for people, animals and plants in the polar regions, as well as around the world, through sea level rise."

The World Wildlife Fund said the loss of sea ice means trouble for a vast web of life that depends on it, from polar bears to marine creatures.

"Today's chilling news from the Arctic should be a wakeup call for all of us," said Samantha Smith, leader of the WWF Global Climate and Energy Initiative.

"Climate change won't stop at the Arctic Circle. Unless we make dramatic cuts in polluting gases, we will end up with a climate that is unrecognizable, unpredictable and damaging for natural systems and people."

The NSIDC said much of the ice loss could be attributed to an unusually warm February in parts of Russia and Alaska, and that it was still possible that a late-season surge of ice growth could occur.

A detailed analysis of the winter sea ice from 2014 to 2015 is due to be released in early April.