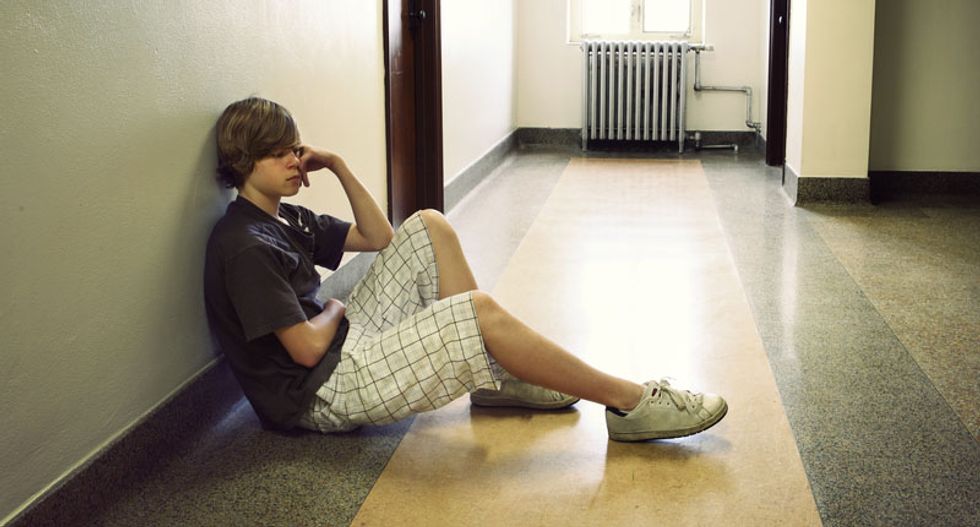 A sad student sits in a school hallway (Shutterstock)

Adult interrogation methods do not belong in the classroom, so why are school administrators throughout the United States being trained to use them on their students in order to extract confessions?

John E. Reid & Associates is the largest interrogation trainer in the world and teaches such methods to hundreds of school administrators each year . Last month, members of the Illinois Principals Association, for instance, could register for a “professional development” event on “Investigative Interviewing and Active Persuasion”. The School Administrators Association of New York State recently offered a workshop for administrators on this same topic, titled “Are you Sure They Are Telling the Truth”?

These administrators are learning the “ Reid Technique ”, which relies on “maximization” and “minimization” tactics in order to induce suspects to confess. Minimization focuses on reducing a suspect’s feelings of guilt, while maximization is designed to heighten suspect anxiety using confrontation. Both techniques are legal and both are incredibly coercive.

Reid & Associates itself advises caution when using the technique on children, especially in schools. In addition to concerns about the efficacy of principal-administered interrogations are those involving basic fairness: school administrators are not required to issue Miranda warnings to children they interrogate on their own (without law enforcement present), so children are not advised of their rights to an attorney or to remain silent.

There is already a well-recognized trend of law enforcement coercing confessions from the young and vulnerable - siphoning them into the criminal justice system. One example is the Englewood Four in Chicago. Teenage boys were coerced into falsely confessing to a murder on the south side of the city, and spent more than 15 years in prison as a result. Terrill Swift, one of the Four, is my client in a civil suit against his police interrogators. There are many recent, less-trumpeted cases, where the coercion of youth seems less an outlier than a general police tactic.

Juvenile coerced confessions share certain hallmarks : use of intimidation, threats, promises of leniency, and outright lies, so that the youth feel their only way out is by confessing. Adult interrogators take advantage of the fact that children are less mature and more susceptible to pressure, and that they lack the experience to make decisions in their best interest. Youth in the criminal justice system are more likely to have diagnosable psychological disorders , and they often fall victim to the “status differential” - youth feel compelled to answer police questions because of the officers’ elevated position of power. All of this is why the young are much more likely than adults to give false confessions.

Subjecting children to coercive interrogations by school officials serves no other purpose than to escalate the flow of our nation’s youth into the school-to-prison pipeline , a phenomenon by which violations of school rules become criminalized and children - particularly poor, LGBTQ, black and hispanic children - are funneled out of schools and into jails and prisons. Not only does the pipeline lead to higher rates of incarceration but it also results in economic insecurity .

Rather than training principals to interrogate, schools should focus on non-punitive approaches like in-school behavior modification, mentorship , and diversion tactics. That is the more ethical and community-centered approach.