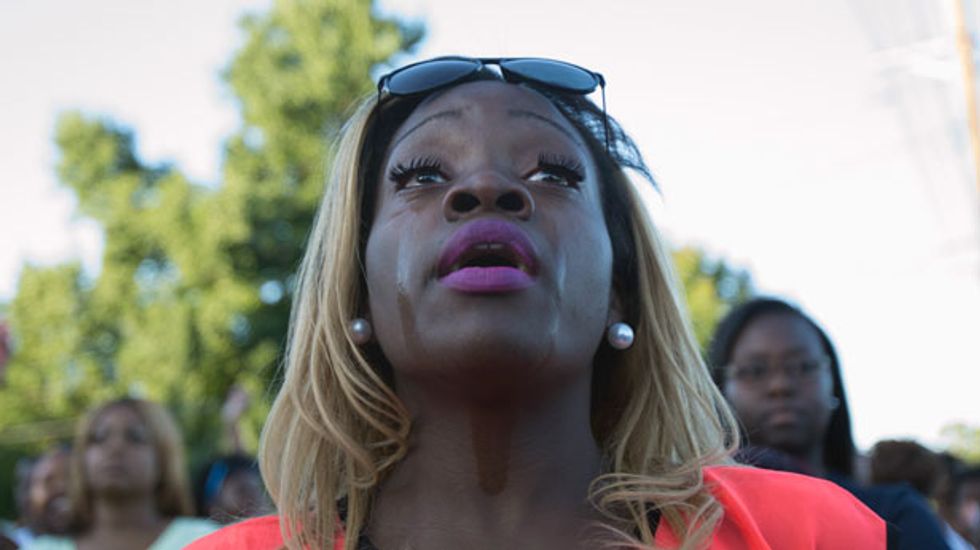 Governments say they aren’t responsible for the violence they visit upon black people, schools remain segregated and voting rights aren’t a given

America has failed to deliver justice for the many who gave their lives for the Selma to Montgomery marches, and all they stood for. Martin Luther King, John Lewis, and thousands who faced down segregation - such as activists Jimmie Lee Jackson and James Reeb - did not simply sacrifice themselves for the vote, but in trying to end oppression for black Americans. Still today, white supremacy is enshrined in American law. Given how it has walked away from enforcing civil rights , the federal government is no longer a bulwark against racism in local government even in the limited ways it was during the 1960s. And it’s not just that America hasn’t dealt with racial justice post-Selma; it hasn’t dealt with the injustices of what happened in Alabama in the 1960s.

The men accused of Reebs’s murder were acquitted . Jackson’s killer was convicted 42 years after the fact, but served less than six months in jail . There is also unfinished work when it comes to the 16th Street Baptist Church bombing in Birmingham. While some of the bombers who killed Addie Mae Collins, Denise McNair, Carole Robertson and Cynthia Wesley were, much later (from 1977 to 2002 ) convicted of committing first-degree murder, society has almost entirely forgotten the fifth girl bombed that day .

Sarah Rudolph lost one eye, her sister, and eventually her church home that day. With vision failing in her remaining eye, she now faces blindness. Yet she has never received compensation for her injuries - not from the bombers’ families, nor from the formerly segregated city of Birmingham, which allowed for a hateful environment to flourish that enabled her attack. Even as the federal government presented Congressional Gold medals posthumously to her sister and her friends in 2013, it has forgotten her entirely and left her to fend for herself.

As Rudolph told the Guardian in Birmingham this week: “26 pieces of glass came out of my face. They couldn’t save my eye, they had to remove it. I had to pay all the medical expense costs. I was under the doctor for years. I still under the doctor and I still paying bills for my eyes … I was trying to get restitution for my injury, but everywhere I was going, they said [there was no] restitution for the folks that was injured in that bombing”.

The argument that governments are not responsible for being accessories to sometimes mortal violence was similar to the one made by the City of Cleveland to Tamir Rice’s family just last week, and the one the Department of Justice made to Mike Brown’s family just a couple days ago. While the federal government has found rampant racial profiling in Ferguson, Missouri - which is behind some 1,581 other police departments which actually practice racial profiling more often - it doesn’t think Darren Wilson should face any punishment. The DOJ’s report shows that the Ferguson police consistently racially profiled its citizens and that it earned its revenue by arresting people instead of through taxes . Once again, a 12-year-old black child and his family has had to pay the ultimate price - just as Sarah and Addie Mae’s family had to - while the cop who shot him bears none.

But its not just police violence: we are failing to make progress in other areas too. People marched from Selma to Montgomery because of the debts in the Civil Rights Act of 1964, many of which are in arrears to this day . For example, Title IV of the act called for the desegregation of schools, but schools today are arguably more segregated now than they have been in 40 years.

One of the results of the marches was that it paved the way for the Voting Rights Act (VRA) of 1965. But Alabama is part of a “core of six Southern states ... where more than 3 million people are banned from the rolls, largely due to the racial effect the prison industrial complex has on who gets to vote . Meanwhile, the Supreme Court gutted the VRA in 2013 , when it ruled that “jurisdictions with demonstrated histories of racial discrimination” no longer need to get preclearance from the Justice Department before taking action on elections.

The very week that President Obama will be commemorating Selma, the same justices who struck down voting rights will begin to decide if they will scrap the Affordable Care Act, his signature legislative achievement. It is exactly the kind of legislation that could help someone like Russell, who has had to fight for medical help all her life, even as a little girl and bombing survivor .

It is for all of these reasons that we should admit the heresy that the dream does not march on. King’s efforts were for nothing when the residents of the state where he was beaten on the Edmund Pettus Bridge are still suffering so. The dream has been deferred, and maybe is dead. Or, perhaps, we need to let go of the dream metaphor, to stop thinking of the dream of civil rights as a possible alternative reality, but to start demanding rights in the waking world by any means necessary . Until that happens, the brave women, men and children who gave their lives in Alabama did so in vain.