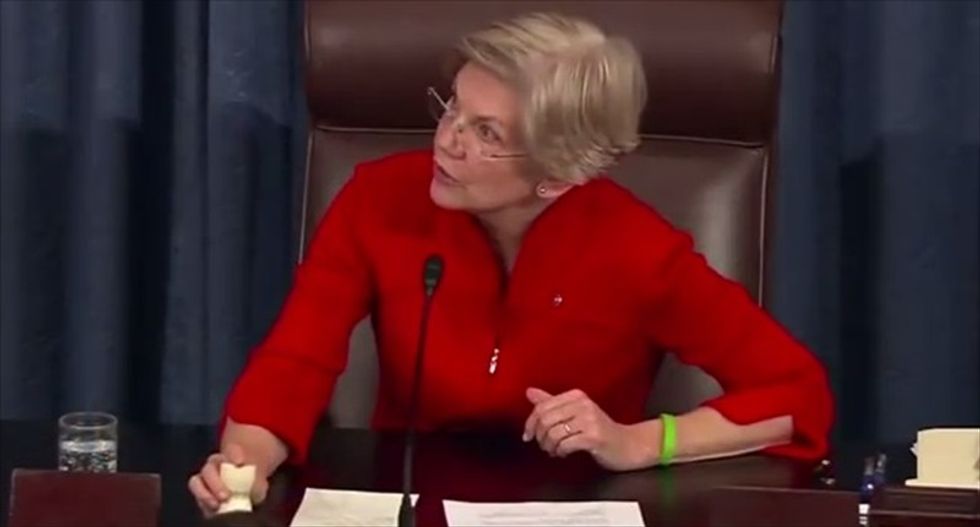 Big Wall Street banks are so upset with Democratic Senator Elizabeth Warren's call for them to be broken up that some have discussed withholding campaign donations to Senate Democrats in symbolic protest, sources familiar with the discussions said.

Representatives from Citigroup, JPMorgan, Goldman Sachs and Bank of America, have met to discuss ways to urge Democrats, including Warren and Ohio Senator Sherrod Brown, to soften their party's tone toward Wall Street, sources familiar with the discussions said this week.

Bank officials said the idea of withholding donations was not discussed at a meeting of the four banks in Washington but it has been raised in one-on-one conversations between representatives of some of them. However, there was no agreement on coordinating any action, and each bank is making its own decision, they said.

The amount of money at stake, a maximum of $15,000 per bank, means the gesture is symbolic rather than material

Moreover, banks' hostility toward Warren, who is not a presidential candidate, will not have a direct impact on the presumed Democratic front runner in the White House race, Hillary Clinton. That's because their fund-raising groups focus on congressional races rather than the presidential election

The tensions are a sign that the aftermath of the 2008 financial crisis - the bank bailouts and the fights over financial reforms to rein in Wall Street - are still a factor in the 2016 elections.

Citigroup has decided to withhold donations for now to the Democratic Senatorial Campaign Committee over concerns that Senate Democrats could give Warren and lawmakers who share her views more power, sources inside the bank told Reuters.

The Massachusetts senator's economic populism and take-no-prisoners approach has won her a strong following among liberals who raised 300,000 signatures for a petition urging her to run for the White House in 2016.

Citi spokeswoman Molly Meiners declined to comment specifically on the Warren issue, saying the bank's fund-raising political action committee (PAC) "contributes to candidates and parties across the political spectrum that share our desire for pro-business policies that promote economic growth."

JPMorgan representatives have met Democratic Party officials to emphasize the connection between its annual contribution and the need for a friendlier attitude toward the banks, a source familiar with JPMorgan's donations said. In past years, the bank has given its donation in one lump sum but this year has so far donated only a third of the amount, the source said.

Goldman, which already made its $15,000 donation for the year, took part in the Washington meeting between the four banks to talk about anti-big bank rhetoric of some Democratic lawmakers like Warren but has not had any discussions about withholding money, a source close to the bank said.

"We will continue working cooperatively with members of Congress, regulators and the industry to foster constructive discussions around policy questions," said Andrew Williams, a Goldman spokesman.

Bank of America is not coordinating with other banks on when and how much to give, according to a source familiar with the bank's thinking. It has not yet sent in its check.

"Our decision to contribute will be driven more by the fact that many members of both parties understand the important role we play in driving the real economy and serving customers across the country," said a spokesman, Larry Di Rita.

JPMorgan spokesman Andrew Gray said the bank had "always believed in the importance of engaging constructively with our public officials."

Warren, a former Harvard Law professor who joined the Senate Banking Committee after taking office in 2013, has accused big banks and other financial firms of unfair dealings that harm the middle class and help the rich grow richer.

In a Dec. 12 speech, she mentioned Citi several times as an example of a bank that had grown too large, saying it should have been broken apart by the Dodd-Frank financial reform law.

In January, Warren angered Wall Street when she successfully blocked the nomination of a banker Antonio Weiss to a top post at the Treasury Department. She argued that as a regulator he would likely be too deferential to his former Wall Street colleagues.