WATCH: Parents laugh at open carry activist as he tells board that guns in schools 'just makes sense' 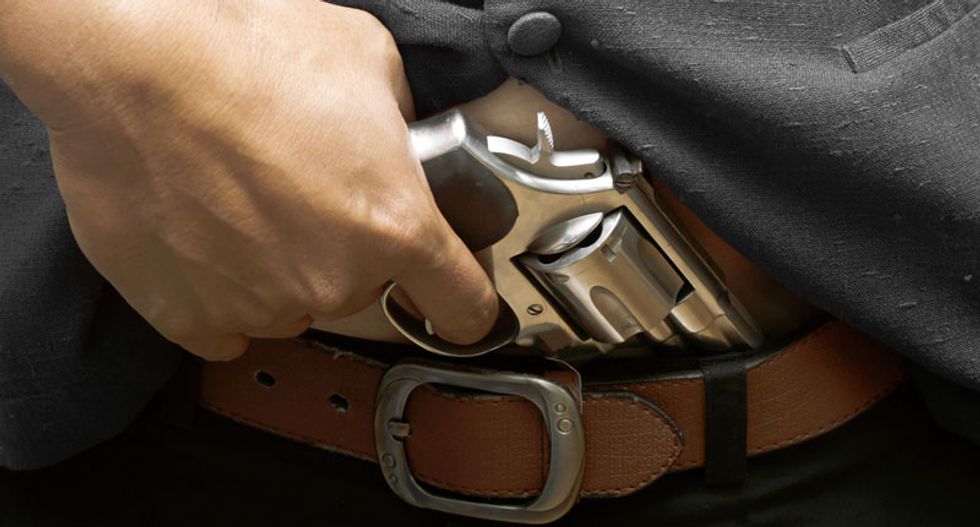 About two dozen armed open carry activist showed up an Ann Arbor school board meeting on Wednesday to object to a proposal banning guns in schools.

Earlier this month, an educator at Pioneer High School called police after noticing that 22-year-old Joshua Wade had shown up to a his sister's choir concert with a pistol strapped to his side.

Wade told WXYZ that he had a moral obligation as a Christian to protect his family by carrying a gun -- even when it was in a school, which he called a "mass murder enablement zone."

According to Michigan law, anyone with a concealed carry permit can legally open carry a gun when they visit a school.

The Ann Arbor Board of Education met on Wednesday night, and Wade came packing heat. And so did 25 other open carry activists, according to MLive.

"As a law abiding citizen, I'm very concerned that this board may attempt to circumvent state law in the area of firearms regulation," Wade told the board. "Board members, I hope that you yourselves, like me, are law-abiding citizens."

The otherwise quiet audience burst into laughter at Wade's claim that "guns in schools just makes sense," causing the board to call for silence.

"The reason we have seen so many tragic school shootings is that laws across the nation have made our schools mass murder enablement zones," he insisted. "The more good people who carry in our schools, the fewer criminals will see those schools as easy targets."

Although a few other open carry activists did address the board, the majority of speaker opposed guns in schools.

"Mr. Wade told [WXYZ] Channel 7 News that it was his Christian duty to do this," one man noted. "I see that as an insult to people of faith everywhere."

But against the objection of the armed activists, the Ann Arbor School Board passed a resolution calling on the Michigan Legislature to change current laws preventing them from banning guns in schools.

Watch the video below from MLive.com.

Watch Wade's interview with WXYZ below.