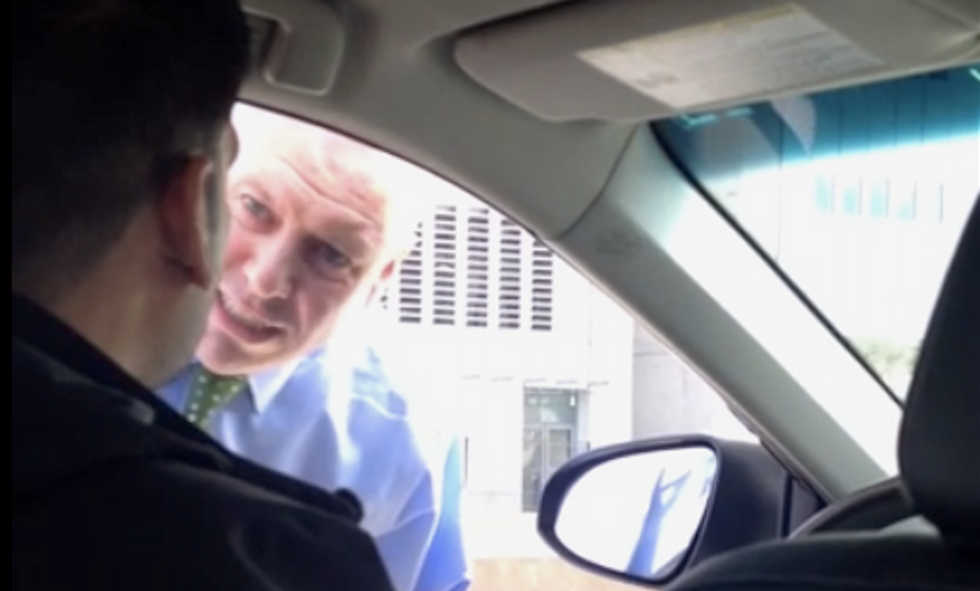 In the video embedded below, a plainclothes New York City Police officer can be seen angrily berating a driver for the ride-share service Uber, hurling xenophobic invective and threatening to arrest the driver over a petty parking dispute.

The New York Daily News reported that the video was recorded and uploaded to YouTube by passenger Sanjay Seth, who titled it "Police Abuse of Uber Driver in New York City, March 30, 2015."

According to Seth's description of the clip, "In an unmarked car, the policeman was allegedly attempting to park without using his blinker at a green light. (His reverse lights weren't on. Likely double parked without hazards on.) The Uber driver pulled around and gestured that he should use his blinker, casually and non-offensively, and kept driving us. The policeman aggressively pulls up behind us and this is what happens."

"I don't know what fucking planet you think you're on right now," the officer said before mocking the driver's heavily accented English and punching the car.

When the angry officer returned, he started ranting at the driver -- named Humayun -- who simply said, "Okay," when the officer began to speak.

"Are you gonna let me fucking finish?" the officer shouted. "Stop interrupting me!"

"How long have you been in this country?" he demanded. "I got news for you. And use this lesson. Remember this in the future. Don't ever do that again. The only reason you're not in handcuffs going to jail and getting summonses in the precinct is because I have things to do."

Seth wrote on Facebook, "Our Uber driver, Humayun, was abused by a police officer today in New York. The unending rage, door slamming, throwing items into the car, threatening arrest without cause was bad enough -- but the officer's remarks at the end really took it to another level."

The Daily News said that the NYPD is investigating the incident.