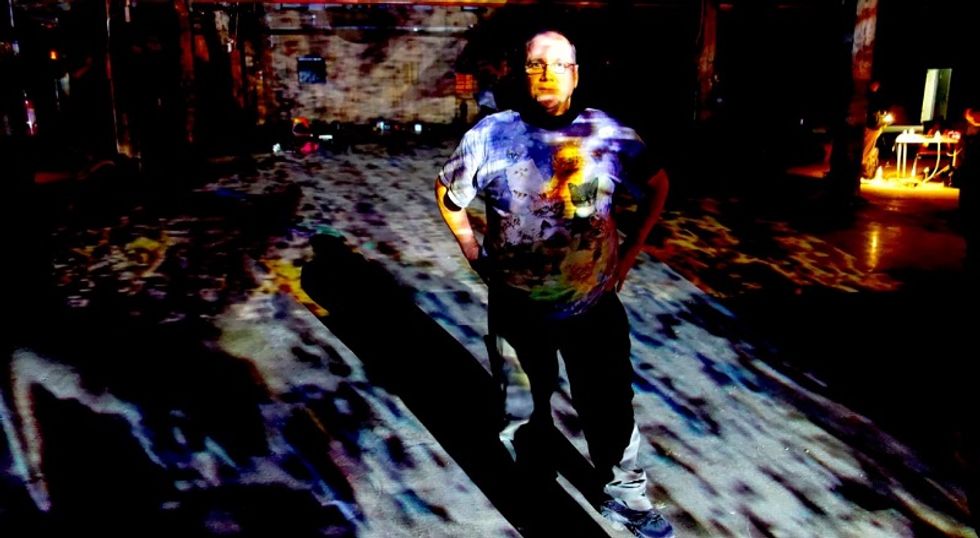 Peter Shapiro bathed in his own video projections at the Knockdown Center in Queens, NY [Photo: Matthew Caron]

On February 28, 210,000 tickets for The Grateful Dead’s final appearances ever – three shows at Soldier Field in Chicago -- sold out in a matter of minutes. Millions of Deadheads who couldn’t get their hands on tickets were left brokenhearted and scrambling to find another way into the shows.

The concerts are being produced by Peter Shapiro, a promoter who owns the happening New York venue Brooklyn Bowl and also the Capitol Theater in Westchester County. He’s suddenly someone every ticket-lacking Deadhead in the country wants desperately to talk to.

And that’s why a video artist and life coach who lives in New York’s Lower East Side who happens to have the name of Peter Shapiro is getting a steady stream of emails and phone calls from Deadheads everywhere.

“Are you the Dead50 promoter?” begins one email. “If you are, you should be ashamed how you have handled this ticket process.”

The Lower East Side Shapiro, 57, is not the promoter of the Dead’s three night run at Soldier Field this July. He just happens to share the same name as the guy who’s actually putting on the shows. But for the last few weeks, Shapiro has found himself going on a short and very strange trip, swamped by calls, emails, text messages, and Facebook posts from Deadheads reaching out to him, often via the website that bears his name, www.petershapiro.com.

“Usually they are asking for tickets for shows,” says Shapiro, who tries to respond to most messages and let people know he is not “Peter Shapiro the Promoter.” “But there are a lot of complaints and a lot of heartbreak.”

Indeed, there have been bummers aplenty in the Deadhead universe regarding the upcoming finale. According to Billboard, 500,000 people were waiting online to purchase tickets for the three “Fare Thee Well” shows, which will feature the Grateful Dead’s four “core” surviving members, Bob Weir, Phil Lesh, Mickey Hart and Bill Kreutzmann, as well as Phish guitarist Trey Anastasio and other guests. The number of disappointed fans in need of a “miracle”—that’s Deadheadspeak for a ticket to a sold out show—is incalculable.

Shapiro does the best he can to lend a sympathetic ear, drawing on what he’s learned working as a life coach.

“I can’t get them tickets, obviously, but sometimes I try to help,” says Shapiro, an open-minded music lover who might be described as a recovering Deadhead. “I had this one woman who was still very broken up by Jerry’s passing. I tried to tell her that there’s a whole world of music out there for her.”

Some correspondents write to pitch the other Shapiro ideas. “I had one great one. A woman sent a rambling pitch about having “A ‘Rainbow Carpet’—as opposed to a red carpet—for the event. She wanted to be a hippie Joan Rivers. I told her it should be a tie-dyed carpet.”

Another Deadhead outlined “a whole plan to simulcast the concerts at different venues. He sounded pretty on the ball. In fact, I think the promoters are exploring a similar idea.”

Being mistaken for the promoter has been going on sporadically for years for Shapiro. In 2010, he received an email from Justin Kreutzmann, a filmmaker and the son of Dead drummer Bill Kreutzmann. “He clearly thought he was writing to the promoter,” says Shapiro. “I got the impression was looking for funding for a project. When I told him I was a different Peter Shapiro, he said us both being filmmakers was a ‘cosmic happening.’ I wrote him back. Never heard from him again.”

One other common strain of email that has surfaced is the totally spaced-out pitch. “It’s people suggesting amazing ideas without actually sharing the ideas,” says Shapiro. “They aren’t trying to create suspense, they just think what they wrote conveyed enough to mean something.”

The ineptitude of these letters leaves the life coach in him a little stunned. “I’m like, This is your one shot at the big time, and this is what you write? But I try to be supportive.”

Shapiro has worked on his fair share of multimedia productions—he even started experimenting with psychedelic VJ’ing in the 70s—and sometimes he is moved to write back with constructive advice. “I tell them basic things like, ‘Put your ideas in bullet points’ and ‘be succinct.’”

Some of these exchanges have happy endings. One email chain that Shapiro shared began:

FIRST OFF- I HAVE TICKETS TO THE SHOWS AND I AM NOT A DOUCHEBAG TRYING TO GET TICKETS.. haha

I’m a professional photographer/Videographer and would love to put my talents to use for these shows.

After some back-and-forth, which included suggestions about contacting the promoter via his corporate office or finding out who was handing the filming of the event, the videographer wrote back:

“As far as being connected to the world, some of these people are like free radicals,” Shapiro said, referring to a chemistry term for unstable electrons.

Lately, Shapiro has taken to social media to ask his friends for ideas about what he should do to address this mix up and what he should tell these bummed out and hopeful deadheads. Because, frankly, it’s a little exhausting.

“Change your name,” posted one friend.