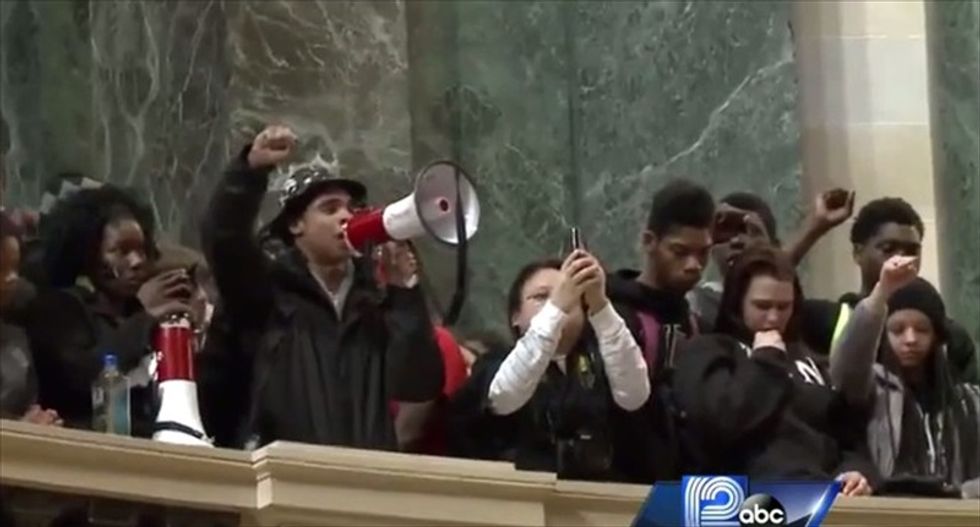 Protesters gathered at the Wisconsin state capitol to criticize the fatal police shooting of 19-year-old Tony Robinson on March 9, 2015. [WISN-TV]

Around 1,500 Madison, Wisconsin students ranging from middle school to college left their classes and held a demonstration at the state Capitol on Monday criticizing the fatal police shooting of 19-year-old Tony Robinson, WISN-TV reported.

"I'm a 13-year-old boy. Five more years, I'm 18, and I could be shot by a police officer," eighth-grader Tavion Wells said. "So it has to stop somewhere."

As ABC News reported, police said Officer Matt Kenny shot Robinson following a confrontation inside an apartment. Kenny allegedly followed Robinson, who was unarmed, into the apartment after responding to reports of a man "yelling and jumping in front of cars."

According to the Madison Capital Times, Police Chief Mike Koval apologized to Robinson's family while meeting with them separately on Monday night, and promised transparency during the investigation into the shooting.

The demonstration came on the heels of a march on Saturday to the area where Robinson was shot and killed.

The event was followed by a march to the local city hall, where members of Robinson's family asked Mayor Paul Soglin (D) if Kenny would be arrested.

"We're not gonna have that conversation in the hallway," Soglin replied.

WISN also reported that Robinson's family criticized what they saw as an undue focus in media reports on Robinson's conviction last year on armed robbery charges.

"We paint him as a human being, a 19-year-old, who made a terrible mistake at one point, which is completely, completely disassociated from this act," said his uncle, Turin Carter. "That's what's very upsetting is that they try to associate his past with this act to try to paint a picture of the type of kid he was."

Watch WISN's report, as aired on Monday, below.