‘Your world is on fire’: Ted Cruz scares the hell out of a terrified little girl in New Hampshire 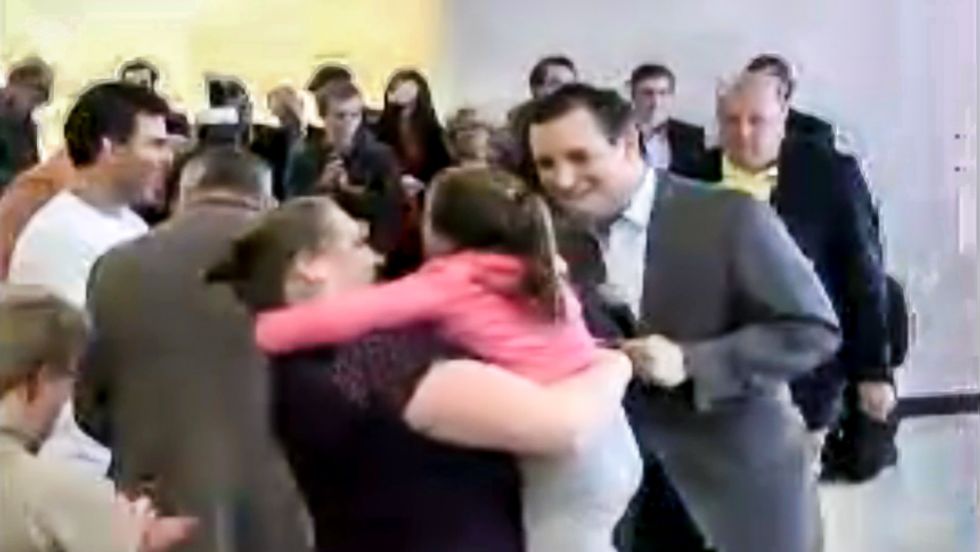 Sen. Ted Cruz (R-TX) was forced to pause a speech in New Hampshire on Sunday after he reportedly terrified a little girl by shouting that her "world is on fire."

While speaking at an event sponsored by the Strafford County Republican Committee, Cruz warned that there was an "urgency to politics today that is unlike anything any of us have ever seen."

"It is now or never," he explained. "I don't think we've reached the point of no return yet. But we're close. We are close! And I believe if we go four or eight more years on this same path, we risk losing the greatest country in the history of the world."

"Millions of Americans are realizing this isn't working," the possible Republican presidential candidate continued. "The Obama economy is a disaster. Obamacare is a train wreck."

"And the Obama-Clinton foreign policy of leading from behind -- the whole world is on fire."

Tampa Bay Times political editor Adam Smith noted on Twitter that Cruz had to pause his speech to respond to a little girl in the audience who was young enough to be carried by her mother.

"Ted Cruz literally just scared a little girl in NH," Smith wrote. "'The world is on fire?!' she asked, repeating his line on Obama-Clinton foreign policy."

Realizing that his rhetoric might have gone too far, the Texas Republican decided to do some damage control.

"But you know what?" he asked. "Your mommy is here and everyone is here to make sure that the world you grow up in is even better."

Watch the video below, which was live streamed by Granite Grok.