A woman president would be cool, but I’m not sold on Hillary Clinton yet 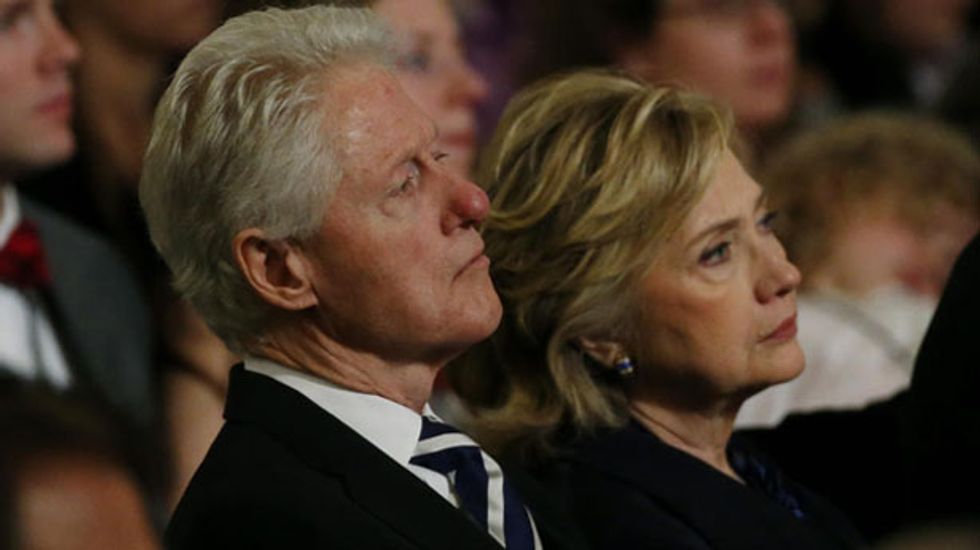 The feminist establishment has declared her our candidate. However, many of the same women once chose politics (and Bill Clinton) over sisterhood

I believed in feminism in my radical days of wearing a burnt-yellow Ms Magazine t-shirt (with no bra underneath, of course) to my Mississippi high school; I loved to debate teenage misogynist boys and male teachers about why we needed the Equal Rights Amendment and insisted on opening my own doors because I had to take a stand, somehow, in the Bible Belt. Worse, I went around proclaiming that I might never get married or have babies, which is sacrilege in these parts.

Then at Mississippi State in the early 1980s, I excitedly went to a local National Organization of Women meeting, and was promptly treated like a dumb Southern belle. The feminists there even made a stink about of my nail polish –because that was the thing to notice about a confused, young feminist and date-rape victim . The solidarity and sisterhood I’d expected, hoped for and needed never materialized. I never went to another NOW meeting and even stopped calling myself a feminist for many years.

I remained cynical about the feminist establishment well into my thirties (and am still, today). Still, I interviewed Erica Jong – who coined the phrase “zipless fuck” and titillated a certain segment of upper-crust feminists – in 1997 for a Colorado newspaper about the divides between older and younger feminists, and she took aim at Esquire’s belittling phrase “do-me feminism” .

“It implies that if you’re a feminist, you don’t like sex. It’s total and utter bullshit,” Jong told me then.

A year later, after the Monica Lewisky scandal broke, Erica Jong shared that her hygienist said that the intern “had third-stage gum disease”, as part of a discussion for the New York Observer about Lewinsky’s supposedly inferior physical attractiveness. Jong was possibly the kindest feminist around the table that day. (And Jong publicly apologized to Lewinsky this month, telling Lloyd Grove of Daily Beast that she is now empathetic: “[W]omen have a tough time when they get famous for anything sexual. People are cruel, and I’m glad she survived it.”)

It was bullying, it was harassment, it was what Lewinsky called shaming and misogyny, and it is a primary reason that Lewinsky doesn’t call herself a “Feminist, with a capital F” , even though she appreciates what feminists have done. I’ve been insulted and cyber-harassed in similar terms by some redneck bigots here in Mississippi, but it couldn’t possibly compare to the hurt that these powerful women inflicted in their ad hominem hate-fest.

If you aren’t (or weren’t) a young feminist, you don’t know what it’s like to think you’ve found your people, only to discover that they’re just as capable of denigrating you for your gender or your sexuality as any man is. There are real reasons that, like Lewinsky, so many women still say “I’m not a feminist, but”.

I still find it noxious that many of our feminist mouthpieces had and defended zipless fucks, and then damned the next generation if they followed suit, when they should have been supporting women’s right to be fully themselves and to make mistakes.

Many of us do stupid things when we’re young, and some of them are even sexual. (Didn’t they fight for that right for us?) Some of us trust a well-liked man who then rapes us. Others of us marry into domestic abuse and have difficulty escaping when he holds the purse strings. Still others enter into consensual sexual relationships with exactly the wrong man – especially when we’re not yet mature enough to know that it will end very badly.

When it came to Lewinsky, too many feminists rushed to defend a man who respected women more collectively than individually, and forgot that younger women were watching, listening and expecting more from our founding mothers. But politics trumped sisterhood and solidarity – and the damage-control train ran over Lewinsky’s life.

Now that Hillary Clinton has officially announced that she’s running for president, many of those same women want other, progressive women to set aside politics for solidarity, and line up behind Clinton. Now, I like Clinton on some days, and it would be cool to have a woman president – but we all need to question her. She has long had problems with transparency (I recall her days as an inaccessible New York senator); she is still too “ New Democrat ” for my tastes; and – I admit it – I don’t really love the idea of letting Bill Clinton hang out around the Oval Office with too much time on his hands.

But some feminists don’t want to hear these concerns; they want a woman in the White House. She’s better than Rand Paul or Ted Cruz or some other right-winger, they tell us with annoyance – and she probably is – so we’re supposed to put aside our political concerns and embrace our feminist instincts.

For me and, I suspect, many others the stink that the first Clinton White House left on 1600 Pennsylvania Aveune is still strong, especially when it came to the treatment of not-short list of women. Will electing the Hillary Clinton alleviate that smell? Maybe. But only if we decide this time around to really question any Democrat that we elect to the highest office in the country – even if it’s a Democratic woman – instead of simply defending them when they inevitably make mistakes.