Anti-vaxxers go there: Now they're comparing childhood immunization to rape 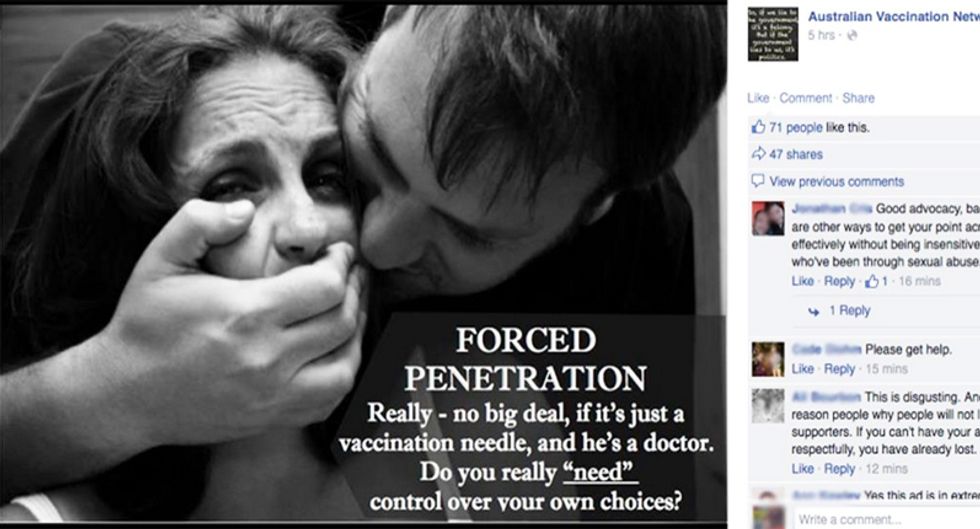 In an atmosphere where anti-vaxx activists are only slightly more popular than polio but are considerably less popular than the measles, now comes another shrill blast from an anti-vaxx group which has compared immunizing children to rape.

Yes, they went there.

The Australian Vaccination Skeptics Network (AVSNI) posted a graphic to their Facebook page on Wednesday -- since taken down -- with an ALL CAP headline reading: "FORCED PENETRATION."

"Really- no big deal, if it's just a vaccination needle, and he's a doctor. Do you really 'need' control over your own choices?"

A screen capture was taken by Australian Women's Weekly , preserving it for posterity and according to AWW  the anti-vaccination group doubled down when called out on Facebook, writing, "This post isn't tasteless - it is honest. What truly IS tasteless is our elected government trying to tell us that we have to vaccinate our children even if we don't believe it is best for their health."

Actually Australia is putting taxpayer dollars where their mouth is, eliminating the religious exemption and instituting “No Jab, No Pay,” depriving parents who don't vaccinate their kids of up to $11,000 in benefits. In this way, Australian officials are penalizing willful ignorance, while effectively making the country healthier for everyone.

Seems like a novel idea in the interest of public health.

And because science is not on their side, anti-vaxxers are now resorting to even more hysterical claims, equating government mandates to forcible sexual assault, which is repulsive on so many levels. But then this is the inevitable  logical progression once you've gone from linking vaccines to Nazi medical experiments to then comparing childhood vaccinations to the Holocaust.

What do you have left?

...which is grotesque, coming as it does from people who are not only immune to scientific consensus but now--  apparently -- from shame.