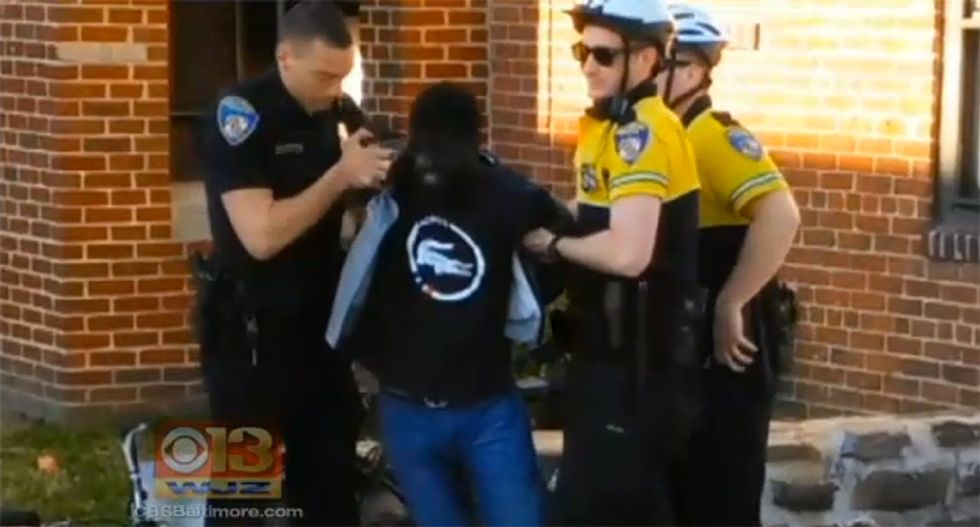 Lieutenant Brian Rice, who led initial chase of man who died with a broken neck after his arrest, faced civil actions in Maryland courts in 2008 and 2013

The Baltimore police officer who led the initial chase of Freddie Gray, the young man who died after being arrested and suffering a broken neck , has twice been accused of domestic violence and was temporarily ordered by a court to stay away from a second person.

Lieutenant Brian Rice faced actions in Maryland’s civil courts over alleged domestic violence in 2008 and 2013, according to public filings. In both cases, requests for protective orders were denied by the judge. For a week in 2013, Rice was also ordered not to abuse, contact, nor go to the home or workplace of a second person who took him to court.

Rice, 41, was one of six officers suspended over Gray’s death on Sunday. Gray, who was 25, was arrested a week earlier after being chased when he made eye contact with Rice and ran away, according to police chiefs. Gray’s neck was left “80% severed” by the breaking of three vertebrae and his voice box was almost crushed, according to his family’s attorney.

A judge in another Carroll County court revoked a “peace order” that was implemented for a week in January 2013 in response an application by the second accuser, also ruling “no statutory basis” existed for it to continue.

A ruling of “no statutory basis” does not necessarily mean the allegations were unfounded. It may mean the accuser could not meet the required burden of proof or that the nature of the alleged abuse was not covered by the order they requested under Maryland law.

Rice’s first accuser declined to discuss details of the cases on Tuesday. “Brian is a good guy,” she said. The second accuser declined to comment. The Guardian is aware of their identities but will not name them due to the nature of the allegations. Rice did not respond to an email requesting comment. His attorney did not respond to a voicemail and email.

Police have not given further details of the roles each officer played in Gray’s detention. Rice was named by a spokesman on Tuesday along with sergeant Alicia White, 30, and police officers William Porter, 25, Garrett Miller, 26, Edward Nero, 29, and Caesar Goodson, 45. All are suspended on full pay pending the inquiries into what happened.

Rice and one other officer are said to have pursued Gray on their bicycles after he “fled unprovoked”. A knife was found in one of Gray’s pockets when he was searched and he was charged with illegally carrying it.

Cellphone video of the arrest released last week showed Gray being dragged into a police van by officers. The video did not show his initial treatment by police. While he was shouting in apparent pain and moving his head, at least one of his legs appeared limp.

However, police said in a report filed to court in Gray’s knife case that he was arrested “without force or incident” and had suffered a “medical emergency” during his transportation in the police vehicle. Senior officials echoed this claim and said all the officers deny using force.

The US Department of Justice on Tuesday opened a civil rights inquiry into Gray’s death . A spokesperson said investigators were “gathering information to determine whether any prosecutable civil rights violation occurred”.

City authorities are carrying out a separate criminal inquiry into the incident. The investigation is scheduled to be completed on 1 May. State prosecutors will then decide whether or not to bring a prosecution.

A spokesman for the Baltimore police department did not respond to a request for comment on the past allegations against Rice and declined to provide a department photograph of the lieutenant, who joined the police force in 1997.

Rice won plaudits in November 1998 for being one of three officers to rescue a toddler from a burning house while looking for a suspect in a separate case. The officers subsequently charged the child’s mother with child neglect and reckless endangerment.