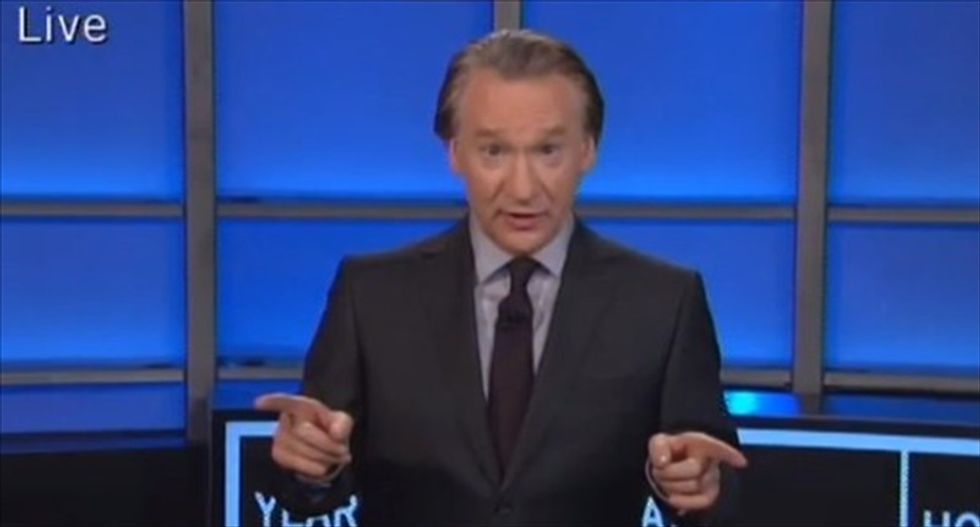 Bill Maher ended Real Time on Friday by demanding that American Christian conservatives admit that they lost the cultural battle despite fixating on same-sex marriages.

"That's the biggest problem facing America? Not climate change or terrorism or the wealth gap, but gay cake?" Maher asked mockingly. "It's not like gays are asking bakeries to make a giant penis cake that goes from soft to hard and squirts out butter cream. Which reminds me, the big party is tomorrow."

The quandary Indiana Gov. Mike Pence (R) and other religious conservatives face, Maher said, is that they claim to hate discrimination, while loving the Bible -- a book he said commands them to discriminate.

"On the one hand, clearly God has spelled it out -- He hates f*gs," Maher said. "But you like your gay neighbors Rob and Larry. But the Bible tells you to kill them. Yes, it literally says kill them. What to do?"

He then chided California attorney Matt McLaughlin and his "Sodomite Suppression Act," calling it the latest in a long tradition of anti-LGBT rhetoric equating homosexuality with a Biblical apocalypse.

"Take fundamentalists at their word. They fundamentally believe this stuff," Maher explained. "And if you believe that God wiped out Sodom and Gomorrah for being too gay, then yeah, He must be itching to hit West Hollywood."

He then veered into another criticism of Islam, asking his audience to imagine a country full of people like McLaughlin.

"Well there is, it's called Saudi Arabia. It's called Iran. It's called Pakistan," Maher said. "I could go on. But suffice it to say that in many Muslim countries, you wouldn't have to work hard at all to get signatures on your 'Kill All The Gays' ballot initiative. In 10 such countries, it's already the law."

Maher then shot a look at panelist Fareed Zakharia before continuing.

"Mohammed says of sodomy, kill the one who does it and the one to whom it is being done," he said. "Especially him because he probably likes it more."

Instead of groups like ISIS "hijacking" Islam, Maher argued, the real "hijackers" are the moderates in any religion.

"I thank Atheist God for them," he said. "They're the ones who took a Sharpie to the Bible and redacted all the crazy parts until there was almost nothing left to read. Like an email from Hillary Clinton."