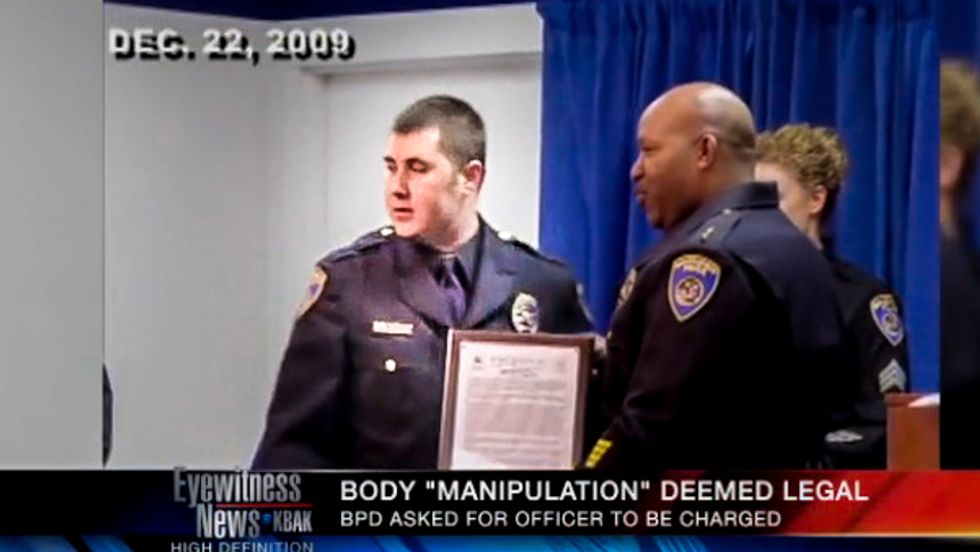 The Bakersfield District Attorney's Office has declined to prosecute a California police officer after an investigation found that he manipulated the body of a dead man who was shot by police last year.

The Bakersfield Californian reported that Senior Officer Aaron Stringer arrived on the scene of a Nov. 13 shooting after police opened fire and killed 22-year-old Ramiro James Villegas, who had led them on a chase and then reportedly reached for his waistband. However, no gun was ever found on the suspect.

After the body was moved to Kern Medical Center, multiple officers said that they witnessed Stringer touch the corpse in an unprofessional way.

She said that he also turned Villegas' head several times, and watched as it returned to its original position because rigor mortis had already set in.

Stringer laughed and told her that he "loves playing with dead bodies," DeGeare recalled.

The veteran officer later advised her to "just say no" if detectives asked if she had seen the body. A second officer who was at the hospital said that he also observed Stringer manipulating the body.

"I just knew it was wrong, what was going on, and I should have said something at the time," DeGeare explained to investigators, according to a report obtained by The Bakersfield Californian.

Assistant District Attorney Scott Spielman said that he had reviewed the report and declined to press charges because the law states that a body "shall not be disturbed or moved from the position or place of death" without the permission of the coroner. And because the body had already been moved to the hospital, the law did not apply to this case.

But Villegas' family feels that Stringer should be prosecuted or fired at the very least.

"It's disturbing," Sarina Gonzalez, who was Villegas' sister, told KBAK. "It's sickening. It's hurtful. It's not OK. It's not OK."

Stringer has been in trouble with the department before. He was arrested in 2010 for driving under the influence of Ambien prescription sleep medication, and for a hit-and-run. And he was involved in at least two other shootings.

"We don't need cops that are acting unprofessional," Villegas' brother, Joe Arambulo, insisted. "Thank God that somebody stepped up and said something."

Although the district attorney declined to press charges, Stringer had hired an attorney and an investigation by the Bakersfield Police Department was ongoing, The Bakersfield Californian reported. Attorney Mark Geragos filed a claim against the city, and indicated that he would move forward with plans to pursue a lawsuit.