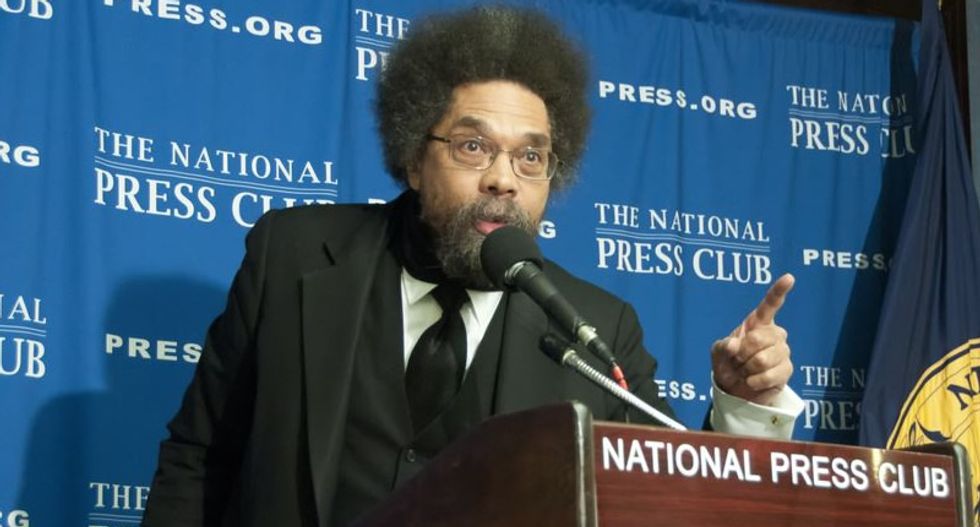 The outspoken civil rights activist and academic Cornel West said Harvard University risked being on the wrong side of a “planetary Selma”, culminating a week-long campaign by students and prominent alumni campaigning for the most prominent university in the US to divest from fossil fuels.

The sit-in protest shut down the campus building that houses the president’s office for the entirety of so-called “heat week” , and forced the closure of another administration building for two days.

Harvard’s administration – despite a reported $79m worth of direct investments in coal, oil and gas companies and likely much more indirectly – has stayed relatively quiet on the growing issue of divestment, but there were signs that the movement had made progress.

Related: Harvard divestment campaigners gear up for a week of action

Drew Faust, the university’s president, had been “moved” by the protest, said Bill McKibben, a Harvard alumnus and leading environmentalist who has worked closely with fossil fuel divestment initiatives across US college campuses and with the Guardian’s “Keep it in the Ground” campaign .

Faust, who has rejected divestment as “neither warranted or wise”, even reached out to a leader of the student protest movement for a one-on-one meeting.

The student, McKibben told the Guardian, turned her down.

“It’s climate justice, more than anything,” McKibben said. “And no one has stood on the side of reason and justice more than Cornel West.”

West, in a final protest organised by the student group Divest Harvard, pushed even further on Faust.

The protesters did pick up one important endorsement this week – Kat Taylor, one of the university’s overseers and CEO of Beneficial State Bank. In a statement, Taylor said: “I am signing the divest letter as part of the ongoing efforts to encourage a full and transparent debate about how Harvard should lead on climate across all of its activities – research, teaching, campus practices, and investments.”

The scale of Harvard’s investments in fossil fuels is difficult to measure, as much of the university’s investments are in mutual and other funds. But estimates run from $15m to more than $100m.

Benjam Franta, a PhD candidate in physics at Harvard, had been camped with the other activists outside Massachusetts Hall all week. He said the second night was the hardest.

“After that, you get used to it,” he said. “And the days have been really inspiring. The number of people who have engaged with [divestment], I felt more inspired to stay as the week went on.”

McKibben said he was realistic but hopeful about the long-term effect of the week’s protests and others at universities such as Yale and Syracuse.

“I don’t believe it’ll lead to Harvard divesting right away,” he said. “But the world around Harvard is moving, and the people here making such a noise are the reason it is moving.”

Chloe Maxmin, a senior at Harvard studying social studies and environmental science, was one of the protest’s organisers. A longtime activist from Maine, she worked on campaigns to stop development of tar sands, and said she saw the divestment protest as a way to continue her work protecting the environment of her home state while at university in Massachusetts.

For Maxmin, a win would be no less than Harvard’s complete divestment from fossil fuels. But, she said, the protest was part of a broader campaign. “We were also aiming to build a broad-base movement,” she said. “And we’ve done that.”

Maxmin said that far from inviting confrontation, the university had “run away” from protesters, vacating buildings where protesters were and avoiding confrontation. “Administrators were told to work from home,” she said.

“Throughout Harvard heat week, Harvard’s top decision-makers have been hiding from both their students and from the issue of climate justice,” protesters wrote in a statement on Wednesday. “They must face the broad, diverse, and growing coalition behind divestment from fossil fuels.”

Ted Hamilton, a second-year law student, said he had been involved with the campaign since arriving at university in 2013 and that the growth of the ongoing protest movement was nothing short of “amazing”.

West, the longtime activist and academic who was recently arrested while protesting in Ferguson , said environmental activism had parallels to a new civil rights movement.

“We’re fighting against injustice,” he told the Guardian before his remarks at the protest on Friday. “We have to get a handle on the impending ecological catastrophe.”

The protest coincided with the Guardian ’s own fossil fuel divestment campaign.