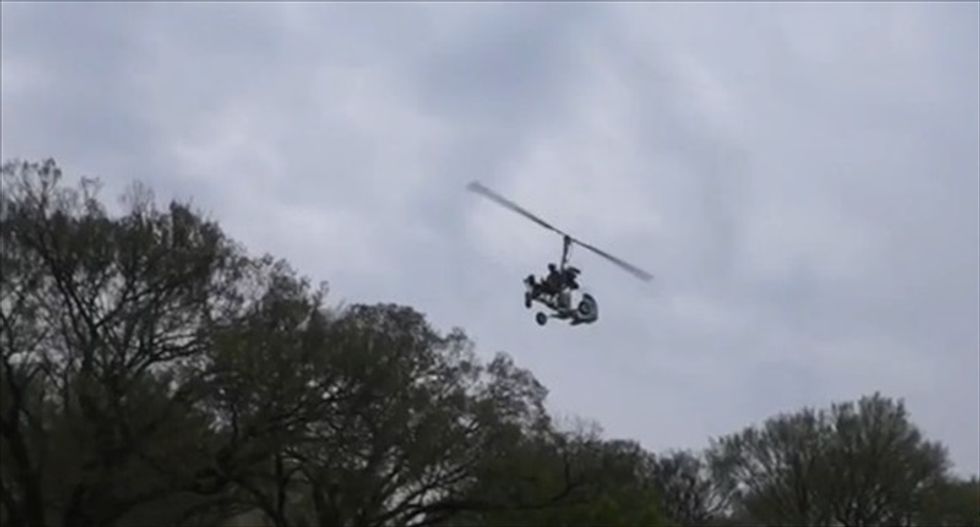 A Florida man was arrested after he landed his small helicopter on the west lawn of the U.S. Capitol on Wednesday, police said, violating restricted airspace and causing a security scare.

Doug Hughes, 61, a U.S. Postal Service mail carrier from Ruskin, Florida, has been jailed and is facing undisclosed charges after he flew his "gyro copter" over Washington and landed on the Capitol grounds about 1:30 p.m., the U.S. Capitol Police said in a statement.

The Tampa Bay Times reported that Hughes planned to make the flight to draw attention to the issue of campaign finance reform. He wrote letters addressed to each member of Congress calling for changes, the paper said.

Security rules prohibit aircraft from flying in the area of the Capitol and the White House without permission.

A bomb squad investigated the aircraft and found nothing hazardous, the Capitol Police statement said.

A U.S. Postal Service spokeswoman confirmed that the person in custody was a rural letter carrier, but did not give a name.

Streets near the Capitol were temporarily closed while police investigated and removed the aircraft, which resembled a small open-air helicopter with a single rotor on top.

The U.S. Federal Aviation Administration said it was investigating the incident. It said the pilot of the gyro copter was not authorized to enter restricted airspace.

In a bystander video that was obtained by the Associated Press, the copter is shown flying over the reflecting pool west of the Capitol and landing on the lawn.

Nora Neus, 21, of Tenafly, New Jersey, told Reuters that after the craft landed, police ordered the man in it not to move. She said he did not resist arrest.

"It seemed relatively intentional, he just kind of landed and sat there," said Neus, who was in Washington for a job interview.

Hughes took off on Wednesday morning from near Gettysburg, Pennsylvania, about 65 miles (110 km) north of Washington, and headed for the Capitol, a Tampa Bay Times reporter told Reuters.

The incident came several days after a man shot himself to death in front of the Capitol on Saturday and sparked a temporary lockdown.

In January, a small "quadcopter" drone crashed onto the White House lawn. The man who was operating it did not face criminal charges.

(Reporting by Lisa Lambert, Susan Cornwell and Emily Stephenson; Editing by Will Dunham and Eric Beech)

Watch a report on the incident, as aired on NBC News, below.