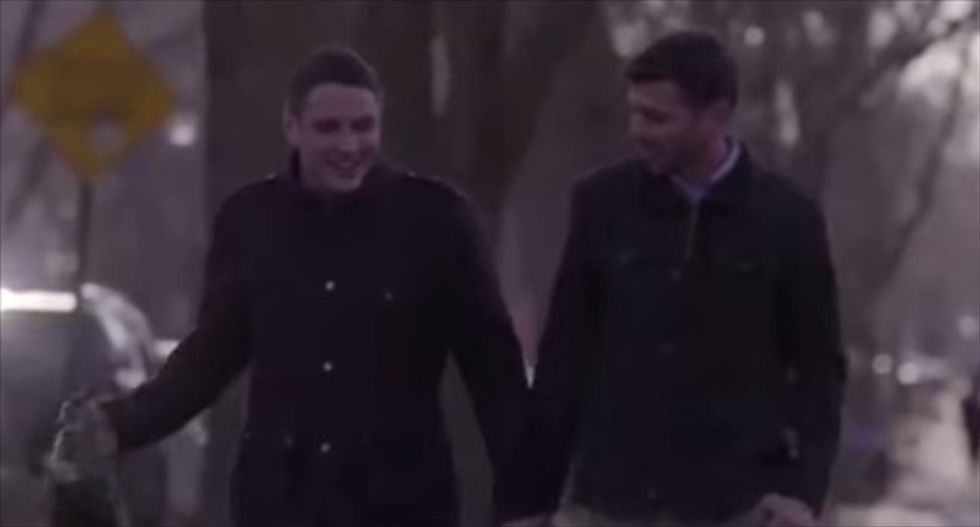 The same-sex couple featured in Hillary Clinton’s video announcing her 2016 run for president has invited the Democratic contender to their wedding, after reportedly being “surprised” to learn they were to appear in her campaign announcement.

The video that launched Clinton’s campaign features a series of vignettes spotlighting “everyday Americans”. Among them are Nathan Johnson and Jared Milrad, who are seen holding hands as they walk down a street in Chicago.

“I’m getting married this summer to someone I really care about,” Milrad says.

After the video launch, Milrad used Twitter to say: “Thanks for inviting us to your big day @HillaryClinton. We’re returning the favor & inviting you to ours. #wedding.”

The couple’s presence in the video is a reflection of how US political and public opinion has changed on gay rights and same-sex marriage in the nearly two decades since Hillary Clinton’s husband, Bill Clinton, signed into the law the Defense of Marriage Act (DOMA).

In an interview with the Washington Blade, Johnson and Milrad said it was “moving” that Clinton included a gay couple in her video.

“We were really excited to see that our interview was featured in the campaign announcement,” Milrad said. “It was particularly moving to see [former] secretary [of state] Clinton feature a gay couple engaged to be legally married, the first of any major presidential candidate.

“To us, this decision demonstrates secretary Clinton’s commitment to LGBT equality and the type of inclusive leader she would be as president.”

The Chicago couple told the paper they plan to marry on 19 July at a park near Lake Michigan. The nuptials will be followed by a reception at a local LGBT community center.

The couple, both of whom hope to see Hillary Clinton became the next president and first female commander-in-chief, told the paper their loyalties had been divided between Barack Obama and Clinton during the 2008 primaries.

“It was the war in Iraq,” Milrad said. “I supported [Obama’s] position on that. [Obama] opposed the war in Iraq. I felt like he was quite strong on LGBT issues, although, honestly, [then] senator Clinton was as well. I really liked his sort of youthful vision for the future at the time, and I felt like just given his involvement in the issues [important] to me, President Obama was the right person for the job at that moment.”

Clinton’s record on LGBT rights has been checkered by her husband’s time in the Oval Office. Bill Clinton opened the military to gays and lesbians. But after facing serious blowback, he accepted the “don’t ask, don’t tell” policy which Obama later repealed. Then, when the Republican-backed DOMA bill landed on Clinton’s desk, he signed it.

Two years ago, the former president wrote in an op-ed for the Washington Post that effectively called on the Supreme Court to overturn DOMA, saying it was “incompatible with our constitution” and “contrary” to the founding principles of “freedom, equality and justice above all”.

Still, Hillary Clinton maintained her own record on LGBT rights. Documents recently released to the National Archives at the Clinton Library show that she and her staff held progressive views on LGBT rights issues, and even tried to derail some anti-gay legislation, according to a Politico report last week.

Clinton is probably most admired by the LGBT community for a 2011 speech that she gave at the United Nations in Geneva during her tenure as secretary of state. During the speech, she declared: “Like being a woman, like being a racial, religious, tribal or ethnic minority, being LGBT does not make you less human. And that is why gay rights are human rights, and human rights are gay rights.”

As Hillary Clinton ramps up her second bid for president, Milrad said told the paper he was convinced she was the right one for the job this time around.

“I feel like Hillary Clinton is actually the right candidate for now, for 2016,” Milrad said. “She is someone who has been on the world stage. She most recently worked on the world stage as a diplomat and is someone who believes strongly, as Nathan said, in women’s rights, in equal opportunity for all of us, in raising the minimum wage and leveling the playing field for the middle class, of which Nate and I are both a part.”

Johnson and Milrad can be seen in the Clinton campaign video, as seen below.