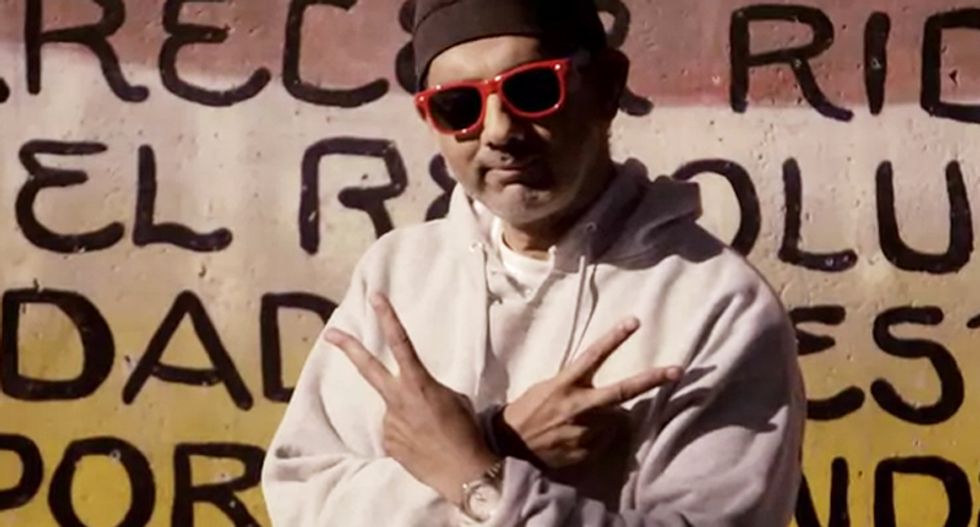 Noted conservative adulterer, "criminal mastermind," and destroyer of the "nerds are cool" myth, Dinesh D'Souza sat down for an interview and music video (remember those?) with Vanity Fair to discuss his post conviction dual-life as a prison yard badass and pensive beach-strolling philosopher.

Yeah, he's still a weird and awful little man with delusions of adequacy.

D'Souza who is rehabilitating himself by trolling Muslim terrorist Barack Obama SO HARD on The  Facebook and on The Twitter (....or so I hear because he has blocked me because I can't handle the truth) is a changed man now. A hard embittered man who -- following his conviction for election fraud -- has looked at life from both sides now and suddenly finds his old friends are acting strange, they shake their heads and say he's changed. And you would be too if you were doing HARD TIME -- when you weren't taking sundown strolls at La Jolla Shores, which is probably mentioned in his Christian Mingles profile faves along with piña coladas, getting caught in the rain, and sodomy ("If you like piña coladas, and having sex in the butt..." C'mon, you know the words -- everybody now.)

I just made that song better. Forever.

You can tell how hard Dinesh's prison life has been by this very dramatic and symbolic opening shot of a plastic bag trapped by razor wire:

... .just like Dinesh was in his crazy legal nightmare because The Man was trying to keep him down.

And you know it is serious, because the accompanying music wasn't Katy Perry's gangsta classic Fireworks ("Do you ever feel like a plastic bag. Drifting through the wind, wanting to start again?) although the parallels are chilling and probably not a coincidence.

Here is Dinesh making his prison bunky his bitch by stone-cold chilling him the hell out by dropping rhymes about his street crimez:

D’Souza tells Peretz that on his first night in the center, his 400-pound bunkmate struck up a conversation: “He goes, ‘Hey, man, what are you in for?’ I go, ‘Campaign-finance violation.’ He goes, ‘What the fuck does that mean?’ I go, ‘Well, my friend was running for the Senate, and I gave her too much money. I raised money for her in the wrong way.’ So he goes, ‘Shit! Can you raise money for me?’ I go, ‘No.’ Then there was the mandatory rape class, which was about ‘establishing that all of us have a right not to be raped.’ Very reassuring.”

Also, too: no piña coladas because this is about rehabilitation, not some fancy-pants country club white collar resort-jail.

Well it was, kind of, but shut-up.

But now Dinesh is out and, despite his Mandela-like incarceration, he's not gonna stop dropping truths on America because that is how he rolls and he is serving notice to the Justice Department that he is down with capital G-O-P and, boys, you can't fuck with me.

Watch the video below, from Vanity Fair: