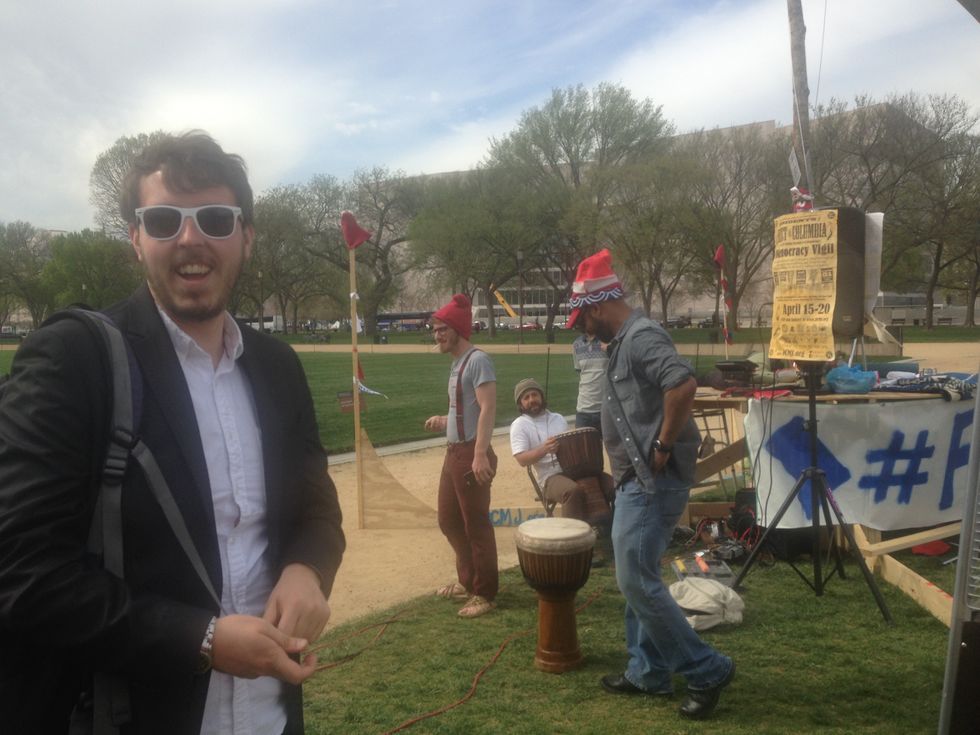 Activists at the Liberty Pole on the National Mall, April 16, 2015 (Joan Shipps)

Representative Jason Chaffetz (R-UT) is pursuing an investigation into the U.S. Park Police for failing to intervene on April 20, when several protestors rolled, distributed, and smoked joints on the National Mall.

“It is still a violation of federal law to so blatantly smoke pot on the nation's mall,” Chaffetz tells D.C.'s local Fox affiliate. “You can protest and petition your government. But can you go out and have dozens of people smoking pot out on the Mall? No! Where were the Park Police?”

The Park Police counter they weren't aware of any complaint calls that would require them to go bust heads down on the Mall, a prospect Chaffetz spokesperson Melissa Subbotin describes as "laughable" to the Washington Post.

The pot smoking protestors who piqued Chaffetz' ire this week are affiliated with the D.C. Cannabis Campaign, a group advocating for marijuana legalization in D.C. (which D.C. residents voted for by an overwhelming margin last November) and against regular congressional interference in D.C. local law.

By April 20, D.C. Cannabis Campaign and friends had been camped out on the Mall for five days. They erected their protest site (complete with giant "Liberty Pole") in the wee hours of the morning on April 15, without a permit from the Park Police. "We didn’t ask permission," to set up a towering pole in full view of the U.S. Capitol, Cannabis Campaign spokesperson Adam Eidinger tells DCist, "we're mad as hell."

Park Police showed up during the afternoon of April 15 and did give proper permits to the protestors, provided they shorten the Liberty Pole a bit and set up a better lighting system for evening visibility.

Chaffetz's opinion of voting rights advocacy on the Mall stands in contrast to that of his colleague, Delegate Eleanor Holmes Norton (D-DC). On April 20, Norton visited the Cannabis Campaign campgrounds (on or around 4:20, no less), and posted a statement of support for Eidinger on her website. “Our creative and committed Liberty Pole advocates show how organized, energized, and innovative our statehood movement is,” Norton writes, “I am enormously grateful to them for keeping the pressure on Congress to provide D.C. residents with full and equal rights in new ways that inform the public.  I am going to the Mall in solidarity with Adam Eidinger and his band of determined residents to express my personal appreciation for the Liberty Pole.”

Kim Perry, Executive Director of D.C. Vote, has the following to say about Chaffetz: "We really need him to begin respecting the will of American citizens that reside in the District, particularly the laws and budget priorities we set for ourselves."