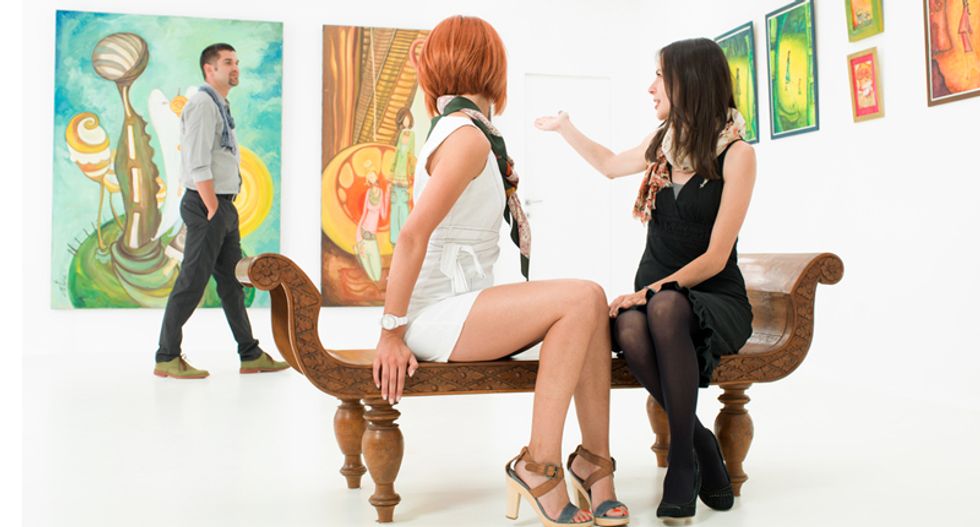 Women sitting on a bench in an art gallery (Shutterstock)

For the last few years, I’ve hovered above the refreshments table at art events, guzzling free wine like a peasant and stuffing napkins full of bread and cheese into my purse. Usually the art is mediocre, I am alone covering an exhibition, and making small talk is excruciating without the encouragement of alcohol.

I have been to thousands of art events over the course of my life. I come from a family of artists: my grandmother is an African-American assemblage artist, and my mother and aunt are artists as well. Growing up, I was dragged to all kinds of art openings and museum shows. Some art school students would love that kind of exposure, but as a kid, I found them painfully boring. Though informally trained in painting and drawing, I have always considered myself more of a writer and an academic. Nobody wants to be like their parents, even if they are bohemians. But alas, I fell into writing art reviews, despite not having a background in art history, deferring my aspirations of becoming a fiction writer.

I’ve written about art for about three years since moving to New York, though I never managed to really write as an art critic; I was more like a junior copywriter for art. Writing for certain art magazines and blogs allowed me a Gatsbyian entrance into the lives of the extraordinarily wealthy. I got to interview art collectors, gallery dealers, models, artists, and designers who probably spend more on handbags than I do on rent. I’ve sipped champagne in a Bentley and feasted on caviar in penthouse apartments. Though I disliked some of the art I was assigned to cover, as a grad student I couldn’t really be choosy about what I wrote about. I wanted to get published, and getting paid to write, no matter the topic, felt like a blessing.

I approached writing about art from a literary perspective, aiming to uncover some significant meaning by contextualizing the work within the artist’s life and perspective. This made uninteresting art exhibits easier to write about, since a lot of artists are more inspiring than their work. I’m shy, and interviewing people proved to be a valuable experience.

Yet art events continue to make me uncomfortable. Whether it's a press preview at a huge museum, a commercial art fair or a packed gallery opening in Chelsea, I’m always anxious to leave. The lighting is always too bright and everyone acts as though they, like the art, are on display, smiling grotesquely as if a camera is lurking. It’s usually so crowded you can hardly view the art, though it doesn’t seem as though people look at the art as much as they schmooze, and you have to stand the entire time. The social discomfort is the least of my qualms with the art world, though. Here are the main reasons why the art world nauseates me.

For the most part, the only people who can afford to buy art in this economy are people who are not affected by this economy, the top 1 or 2 percent. Of course, rich people have always patronized the arts— Michelangelo would never have been able to produce his masterpieces without the Medici family— but today's billionaires aren’t just patronizing artists, they’re investing in and branding them. The top 10 billionaire art collectors have 18% of their net worth invested in art, though the average billionaire invests about .5% of their net worth in art. Investing in art can sometimes prove more lucrative than the stock market; a recent study shows that works by Andy Warhol and Damien Hirst have been appreciating at a higher rate than the S&P 500.

There is money to be made not just in selling art, but also in evaluating its worth. In the same way a financial advisor would help you make investment choices, there are art advisors who counsel your art purchases. “Appearing as if from nowhere, like a biblical swarm of locusts: The art advisors…. in the last few years, advisors have popped up literally everywhere and now outnumber collectors 2 to 1,” says financial writer Adam Lindermann. Many contemporary art collectors have no interest in the art itself, making priceless works of art nothing more than fetishized commodities.

Flipping, selling artworks immediately after purchasing them at exponential prices, is also a common practice among art collectors. Many financial advisors predict that continuing to inflate the value of works of art that are constantly turned over will soon cause the art bubble to burst. “The auction houses are experiencing a situation where every auction total is higher than the last and these vertiginous upward prices cannot be maintained forever. Someday the music is going to stop and somebody is going to be found without a chair to sit on,” says art expert and former Sotheby’s employee Todd Levin.

There are certain exhibitions, like James Turrell’s immersive light installation at the Guggenheim, when experiencing the art everyone is extoling is nearly impossible because there are so many viewers clamoring to see what the hype is about. I waited in line for nearly two hours to see Turrell’s Aten Reign, a “meditative spectacle” where I “may or may not see God” (according to New York Times critic Roberta Smith). Perhaps I would have seen God had not every New Yorker who had that day off been breathing down my neck, but mostly, the entire exhibit seemed like a subtle joke. There I was, standing in a line, shuffling up the steps like a prisoner, waiting to see this transformative work that no matter how spectacular would ultimately frustrate me. Perhaps I’m cynical, but the crowded wait only ruined the exhibit for me. I wondered if this wasn’t some kind of existential funhouse, a metaphor for the futility of human existence, ending in a disappointing light show.

3. Conceptual art is a joke.

Half of the so-called conceptual art I see makes me wonder if the artist is trolling everyone. I often find myself at odds when reading the press release of an exhibit and looking at the actual work, thinking, this person read some basic critical theory, threw together a bunch of objects, and hastily applied some absurd meaning that they themselves cannot fully explain. Maybe I’m old-fashioned, but so much of the art I see is forgettable, like a messy dream I can’t quite articulate.

More and more, highly successful artists are relying on mass production factories to produce their masterpieces. There’s nothing wrong with hiring others to help with the artistic process—this has been done for centuries. But artists like Jeff Koons who employ hundreds of workers to complete their works without ever laying a single brushstroke on the canvas (because that might upset the artistic decision-making process) have turned Warhol’s concept of the factory into an artistic dystopia. People are paying millions of dollars for eyesore animal balloon sculptures that were produced by Koons’ underpaid art serfs, who are fired if they do not complete their painstaking tasks exactly as assigned. I believe creative people should turn their own suffering into art, not cause other people’s suffering with their art.

Mike Kelley once said of the recent boom in art school enrollment, “Young people who would have previously gone into careers in indie rock—which is one of the few arenas where a young person with no particular talent can make some money—can now accomplish the same thing in the art world.” But going to art school doesn’t guarantee success in the art world, and art schools often cater to certain artistic movements, isolating those who don’t fit into current trends.

6. Women artists and artists of color are sidelined.

Twenty years after the Guerrilla Girls feminist art group criticized major art museums for their lack of gender and racial diversity, little has changed. Women still need to be naked to get into the Met (4% of women artists make up the modern section of the Metropolitan Museum and 76% of paintings of nudes are female), and white male artists dominate the commercial art world for the most part. It is rare to see a large museum feature a person of color in a solo exhibition—Carrie Mae Weems was the first African-American woman to get a solo show at the Guggenheim museum in 2014.

7. Money for art in public schools is dwindling.

There isn’t a lack of money being funneled through the art universe, but public school budgets for art programs are always the first to be cut. Art education has many benefits in child development, including encouraging motor skills, visual learning, decision-making, and inventiveness. If even a fraction of the billions of dollars spent on art went into children’s education, it would make a positive difference in the richness of children’s lives and the diversity of the art world.

Not all aspects of the art world disgust me and I don’t want to stop writing about art entirely. I’m just tired of prostituting my writing abilities for work I have no interest in. I believe in decentralizing the artistic ego by encouraging more art collectives and supporting organizations that give back to the community and encourage creative development in schools. I’d like to feature outsider art, public art and art that has some kind of personal or political meaning, or is at least aesthetically pleasing. And I’d like there to be more free wine and better lighting at openings, and maybe a place to sit down.