Instead of identifying as an honorary spinster, how about as a man's equal? 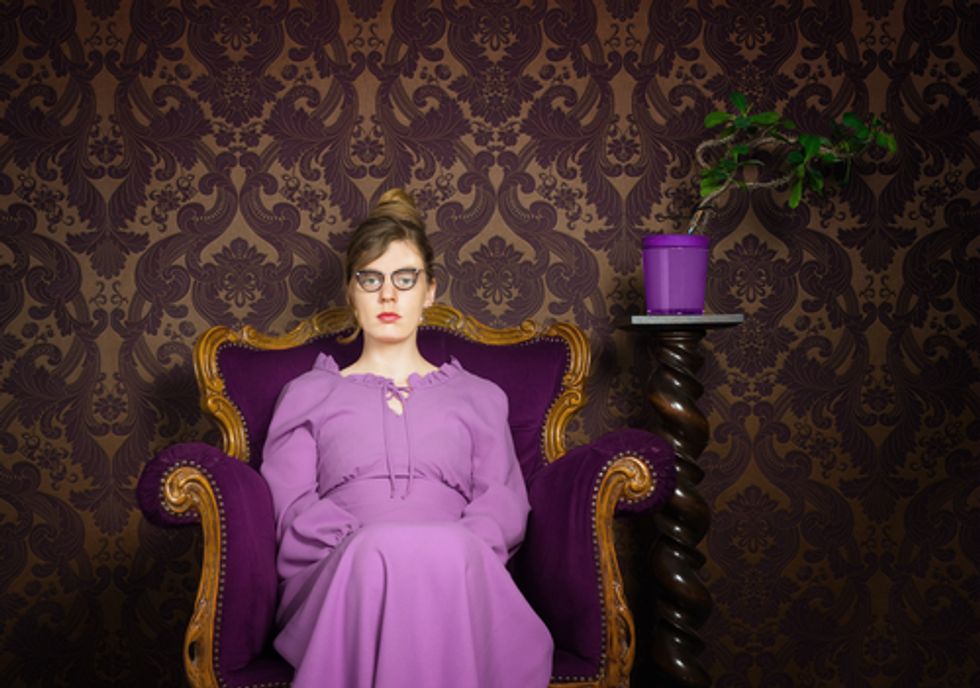 Ann Friedman at Talking Points Memo has a fascinating response to Kate Bolick's new book Spinster, a book that celebrates single women doing it for themselves, as it were. Bolick was single when she got the book deal and, in a twist that will surprise roughly no one, met a man and started a relationship with him  that took her right out of the ranks of the single women she wishes to identify with. Friedman describes how Bolick tried to thread the needle on that one:

After landing a book deal in “the high six figures” to write about her singleton pride (and her serial monogamist past), she was back in a relationship by the time of her publication date. Which is perhaps why, in the final chapter, she defines “spinster” not as a relationship status but as an ideology or a lifestyle. “I grant that a wholesale reclamation of the word spinster is a tall order,” she writes. “My aim is more modest: to offer it up as a shorthand for holding on to that in you which is independent and self-sufficient, whether you’re single or coupled.”

Friedman, who describes her own fears of losing some of her independent identity in the eyes of others now that she has a boyfriend, is sympathetic but unpersuaded:

I want to believe Bolick is right, that “spinster” is a state of mind. But I don’t think it’s that simple. The desire to transcend social categories like gender, sexual orientation, and relationship status is just that: desire. You can be the most independent-minded woman in the world, but if you enter into a relationship, you do have to reshuffle your time and space in order to make room for your partner. And whether or not you believe that partnered women should enjoy more social benefits, you will be more privileged than you were when you were single, especially if you’re part of a heterosexual couple. Just because you don’t identify with negative stereotypes associated with wives and girlfriends—submissive, codependent, nagging, pick any one—doesn’t mean you can up and leave their ranks. Even if you still feel single at heart.

I agree with Friedman. But more than that, I find this entire discussion frustrating, because it's premised on the idea that women are defined by their relationships---or lack thereof---in a way that men simply are not. Now, I realize that's just a fact of our society and not something you can just wave away with a magic wand. I struggle all the time with questions of how to have a relationship that I'm happy with and proud of while not letting people treat me like I'm somehow my partner's property. It's even harder, sometimes, because we collaborate on creative projects like The Orange Couch, and I'm  well aware of the long history of men getting all the credit for work that a couple does together. But I also know you can't control what other people think and do, so it's important just to do what feels right and not worry too much about if people have sexist reactions, intentional or not.

I definitely agree that women should feel free to be independent even if they have a relationship, and that's how I feel myself. But conveying that sense with the term "honorary spinster" feels like it's just dialing into the double standard where men are defined as themselves and women are defined through their relationships. If you doubt that, imagine the reaction if a man said he may have a partner, but he still considers himself an "honorary bachelor". We wouldn't think of that guy as an independent-minded fellow shucking off the expectation that he sacrifice his identity. We'd think he's insinuating that he's going to cheat on his girlfriend. That's because we expect women to sacrifice their identity when they enter a relationship, but men are only expected to sacrifice the opportunity to sleep around.

Since this conversation isn't about how other people treat you so much as how you define yourself, I would therefore like to offer an alternative. Instead of identifying as an "honorary spinster", why not identify as "the equal to a man"? Which is to say, you believe yourself to be just as entitled as a man to have a relationship without being defined by that relationship. I know, it's not as sexy, but it's a lot less confusing. Should anyone have any questions about what that means, just  indicate that you would appreciate the same level of respect and assumed independence that your male partner gets.

That said, I think that identifying as a man's equal may make it easier to help shape how others treat you. Or at least it can help shape how your man treats you, because all you need to convey is that you would like him to treat you in the same way he feels that he should be treated. Whereas I think it might be a little confusing to ask your boyfriend to continue treating you like you're a single woman. He might think, for instance, that he needs to call you on the phone when he gets home as opposed to simply telling you to your face what he's thinking.

I appreciate that the whole "honorary spinster" thing is a way to guard against succumbing to the pressure to play wifey, by which I mean do things like give up your interests for his or even just do more of the housework. But identifying as a man's equal gets the job done just as quickly and it leaves a lot more space, both physically and emotionally, to allow someone else into your life. Because relationships change people, and that's okay. It's good, even! One of the reasons I like being in a relationship is it's fun to have a buddy to explore new interests with, interests that he sometimes brings into the relationship just as I do. The problem is that, traditionally, women were expected to do all the changing, adapting themselves to the man's needs while he set the terms of the relationship. But it doesn't have to be that way. You can instead enter a relationship where there's an expectation that you will both change and grow, often in ways you wouldn't have predicted, and as long as you're doing it together instead of one person is changing for the other, then it's a good thing.