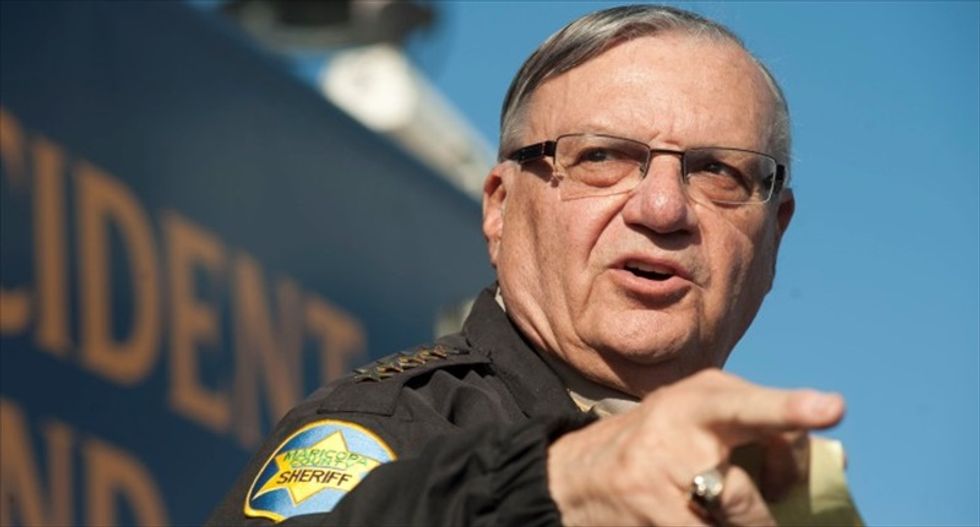 Maricopa County Sheriff Joe Arpaio makes an announcement in in Anthem, Arizona, on Jan. 9, 2013. Photo by Laura Segall for Reuters.

Controversial Arizona lawman Joe Arpaio dodged questions on Wednesday over whether he was to blame for allowing deputies to violate a court order blocking immigrants from being detained solely on the suspicion of being in the country illegally.

Arpaio, who bills himself as "America's toughest sheriff," was testifying at a hearing in federal court to determine if he and four others should be held in civil contempt in connection with the long-running racial profiling case.

Speaking in a rasping and sometimes shaky voice, the 82-year-old told the Phoenix courtroom that others were given the task of complying with the judge's 2011 court order.

"I delegated this court order to my subordinates and counsel that represent me," Arpaio said.

On Tuesday, a former supervisor in his human smuggling unit testified that the Maricopa County sheriff himself was responsible for disobeying the judge's order, which should have ended Arpaio's high-profile immigration sweeps.

The sergeant said his efforts to push for deputies to be trained to comply with the order went nowhere, and that the immigration crackdowns continued for another 18 months.

Questioned on Tuesday by plaintiff attorney Stanley Young, the sheriff often returned to the refrain that others had been told to make sure his office was complying with the rulings.

Young highlighted what he said were inconsistencies between Arpaio's testimony and what he had said in depositions.

The lawyer also noted press releases in which Arpaio said he would enforce all immigration laws, including those which the judge had told him his office could not enforce.

At one point, Young asked Arpaio whether he had consulted with an attorney about his office's compliance with the order.

"I have lots of meetings. I don't recall every meeting that I have," Arpaio responded, while also conceding during his testimony that he bore ultimate responsibility as boss.

He is due to return to the stand for most of Thursday's session, which will be day three of a four-day hearing. Another four days of hearings are scheduled in June.

Judge Murray Snow has ordered that Arpaio appear in U.S. District Court along with three current and one former top aides from the sheriff's office.

The five men face a range of possible sanctions from Snow, including fines, restitution for individuals harmed and increased agency oversight.

Arpaio has previously admitted that he did not follow the judge's orders and offered to pay $100,000 personally to a civil rights group.