Jon Stewart destroys 'disingenuous' Dick Cheney: It was you that propped Iran up at our expense 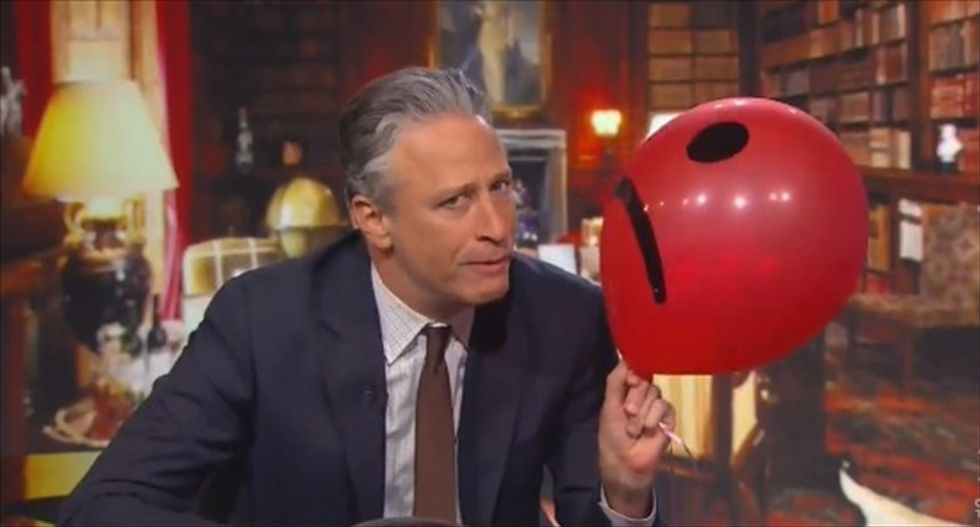 Jon Stewart donned his sleuth cap on Thursday's Daily Show to spell out the extent of the hypocrisy in former Vice President Dick Cheney's "disingenuous, utterly lacking in self-examination" attacks against President Barack Obama regarding Iran.

Stewart questioned Cheney's recent argument that, by proposing a nuclear deal with Iran, Obama was weakening the U.S.

But using Cheney's own logic, Stewart demonstrated that Cheney was "the greater threat to America," showing footage of the former vice president complaining to colleagues at Halliburton in 1998 that the US had become "sanctions-happy" and cut Halliburton and other weapons companies out of potential business opportunities in Iran.

"You, sir, were arguing for the United States to lift sanctions on Iran, so that your company, Halliburton, could get contracts with this radical regime," Stewart told a balloon representing Cheney. "Contracts worth millions of dollars. And pardon me if I am impugning your character, but what would you make of a man whose final act in the business world, before joining the American government as Vice President, would be to enter into contracts with the number one state sponsor of terror, just before leaving to become Bush's running mate -- contracts that were only legal because you did them through a foreign subsidiary."

Stewart's "parlor scene" also included footage of former Defense Secretary Robert Gates saying in January 2014 that one of the Bush administration's goals in invading Iraq was to make Iran stronger. By the time Obama was elected, Stewart added, Iran had more than 20 times as many uranium-enriching centrifuges as when Cheney and Obama's predecessor, George W. Bush, took office.

And instead of picking a capable leader following the US occupation, Stewart said, Cheney publicly supported Nouri al-Maliki as prime minister, a man who was "emboldened and indebted to our greatest regional enemy."

"Once you were in office, in gratitude for Iran's money, you hand Iran the greatest prize of all: Iraq," Stewart told the balloon. "Isn't it you, sir, who are the double-agent determined to bring America down? Isn't it you?"

Watch Stewart's investigation, as posted by Comedy Central on Thursday, below.