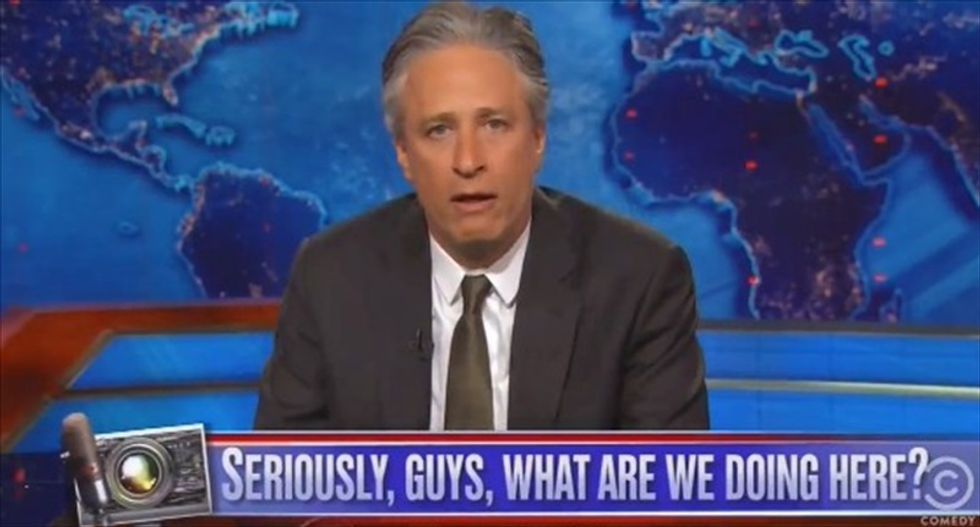 Daily Show host Jon Stewart came down hard on CNN and other news networks on Wednesday, blasting them for recycling images of police violence into use as their own personal "screensaver mode."

"They end up just running as background wallpaper in your discussion," he said. "Sometimes, it's the whole f*cking wall. It's been happening for months now. News shows were looping the Eric Garner choking footage like it was a gif on a Buzzfeed list."

Making the last moments of a person's life into their personal "Newszak," Stewart argued, not only robbed those images of their power, but deprived the victims of their humanity. He pointed out that CNN ran a string of police killing videos "as lower-third ticker fare," while their hosts acted offended at the idea that officers would curse on duty.

The host also jabbed the networks for tailing former secretary of state Hillary Clinton through Iowa so rabidly there was footage of a phalanx of reporters running after her "Scooby van" for seemingly no reason.

"What are we doing here, people?" Stewart asked incredulously. "There are a lot of good reasons for you to be chasing a van: if the van was perhaps the good humor truck, and you were 5; if Zayn [Malik] was in the van, and you were 5; or if you're not so much running toward the van as away from Godzilla -- who more than likely would be chasing you saying, 'It's Day 2, people, slow down.'"

Watch Stewart's commentary, as posted by Crooks and Liars on Wednesday, below.