Jon Stewart slams KS Gov. Sam Brownback: 'See how you like being treated like the welfare queens you are' 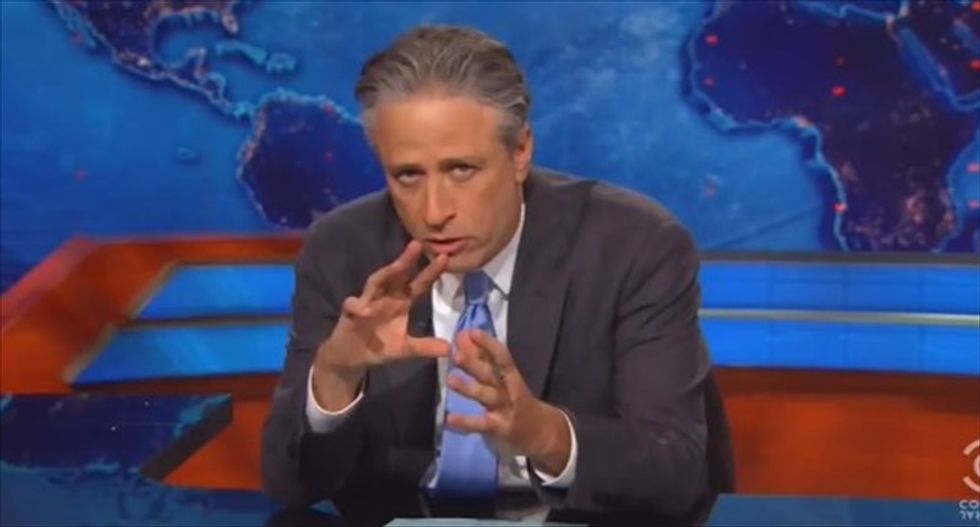 Stewart pointed out that for every $1 Kansas adds to the federal economy, it takes about $1.29, effectively putting it "on the dole."

"If you need to take tax money from New York and Illinois, it's OK," Stewart argued. "Just remember, the fact that you're accepting government assistance shows you can't be trusted to make your own decisions."

To balance the scales, he said, Brownback's state would have to give up its "extravagant right angles," and switch from water to urine for use in watering crops.

"Kansas, these rules may feel petty and unnecessary and quite frankly, insulting," Stewart conceded. "But maybe they'll motivate you to escape your culture of federal dependency. Until then, let's see how you like being treated like the welfare queens you are."

The new law bars participants in the Temporary Assistance for Needy Families (TANF) program from using any of those benefits to pay for things like lingerie, cruises, tattoos, piercings, and movie tickets.

"Basically the Brownback principle is, government has no right to dictate to you how you spend your money or hold your gun. It's your choice, until you're on the dole," Stewart explained. "Then you forfeit those inalienable rights. And the government can at that point step in and treat you like a bad child: you never recovered from the national economic collapse? F*ck you, no movies. It should only be for what you need, and the government gets to tell you what you need."

But as they tightened the purse strings for their state's poorest residents, Stewart noted, Brownback and Republican lawmakers pushed another bill through allowing concealed carry for firearms without a permit.

The measure also strikes down the 8-hour training course that had been required for gun owners. Republican supporters said they chose to "err on the side of freedom," despite the move being opposed by firearm owners.

"The state that believes 8 hours of gun training is too much for its gun owners requires 1,000 hours of training for its professional estheticians," Stewart said. "I tell you why: you can never be too careful with hot wax and butt hair."