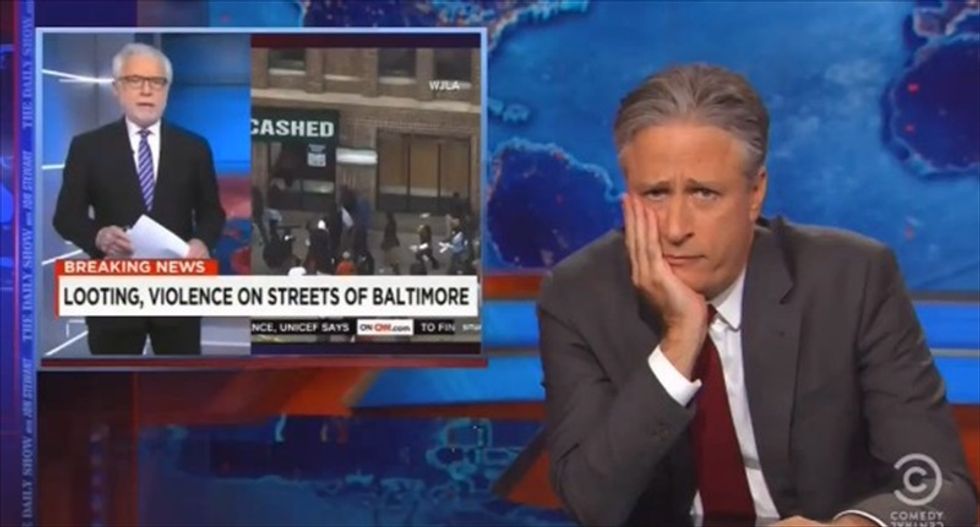 Hours after being called out by a Ferguson activist, CNN's Wolf Blitzer was the butt of the joke on the Daily Show on Tuesday night, as Jon Stewart hammered him for acting shocked about the unrest in Baltimore.

"Elvis leading a herd of orthodox Jewish unicorns through a city street -- that would be hard to believe," Stewart said. "This sh*t happens all the time. Ferguson was just a few months ago, and you were talking about it."

To prove his point, Stewart showed footage of Blitzer acting just as apoplectic over the protests in Ferguson last November.

"I am worried about you," Stewart said. "Do I need to get [Adam] Sandler to go over to your house and just run sh*t by you every morning?"

Overall, Stewart said, reporters have failed to pick up on the recurring nature of urban protests in the US, with Baltimore and Ferguson taking their place among manifestations of turmoil like Watts, Los Angeles, and Miami, among others.

"These cyclical eruptions appear like tragedy cicadas," he said. "Depressing in their similarity, predictability, and intractability."

Things are so "f*cked up" in Baltimore, Stewart explained, that its most successful employment program was casting extras for The Wire, a show devoted to showing the world how it was breaking down.

The city also let hostility fester by not taking steps to better monitor tensions between the police and residents, he said, pointing out that even volcano alerts run on a four-tier system.

"Maybe a more nuanced alert system could allow for more productive intervention beyond, 'You have 10 seconds to disperse,'" Stewart argued. "Or we could agree to keep ignoring the roots of how systemically, historically disenfranchised many African-American communities still are, only paying attention to them when their periodic fiery ball of anger threatens to enter our airspace like some kind of Alex Haley's comet. And once again breathing a blissful sigh of forgetful relief when it's another near-miss."