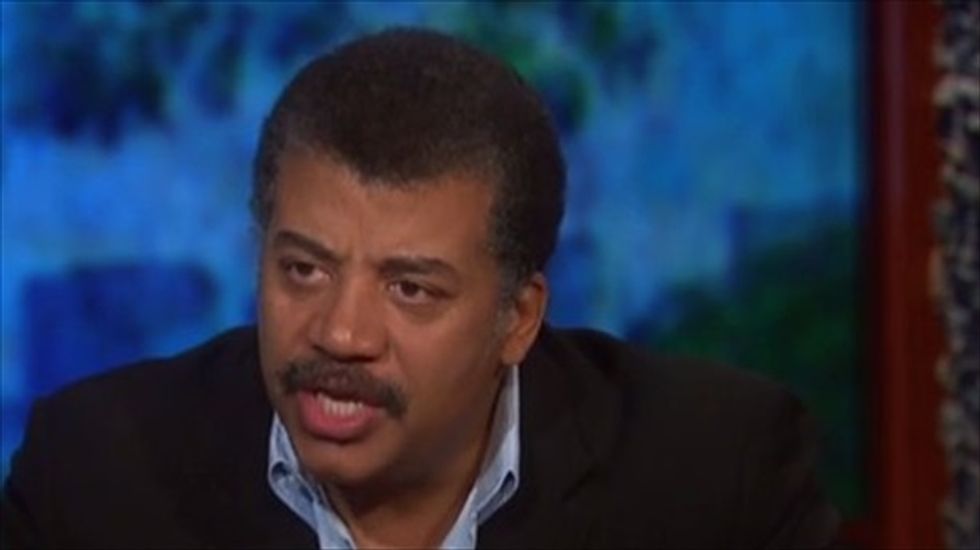 Astrophysicist and author Neil deGrasse Tyson called out the phony "scientific debates" presented on mainstream media in a recent interview with Think Progress.

Tyson gave this interview while promoting his upcoming new show, StarTalk, on The National Geographic Channel.

In response to a question about the state of the climate change debate in the U.S., Tyson said that it is of utmost importance that the electorate, more so than elected officials, "make informed decisions in this, the 21st century, where informed decisions based on objective scientific truths will play a fundamental role in what kind of society we create for ourselves."

The media, according to Tyson, have played a negative role at times in informing the public of scientific facts and knowledge.

"There’s this journalistic ethos saying if I get one opinion then I need to get another opinion that countervails that," he said. "So if I say the world is round, are you obligated to say the world is flat, lest someone think you are being biased in your reporting? Well, that's absurd."

He questioned whether opposing views and denial of emerging scientific truths  deserve equal coverage in the media.

"If you allocated column inches in proportion to the scientific consensus of experiments, there would be one sentence talking about people who deny climate change and the rest of the ten columns talking about research that supports it," he said, and quickly added, "But that’s not what we see in the public."

Tyson criticized the journalistic practice of "painting a debate as though there's a scientific debate when in fact there isn't one," in pursuit of sensational headlines and more "clicks."

The goal of his new show is not to debate about scientific facts, but to enlighten the audience, Tyson explained.

The only fruitful debate held in the political arena, Tyson said, would be a debate about policy based on scientific knowledge.

"But the moment the politicians start saying they are in denial of what the scientists are telling them, of what the consensus of scientific experiments demonstrates," he said, "that is the beginning of the end of an informed democracy."