Neil deGrasse Tyson tells Jon Stewart: The world is different -- and exciting -- because of geeks 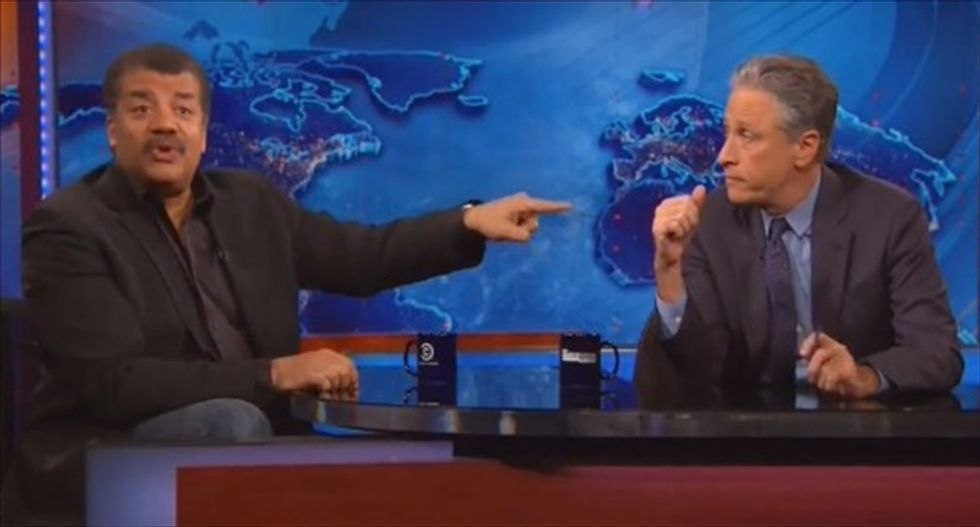 Astrophysicist Neil deGrasse Tyson gushed to Jon Stewart on the Daily Show on Thursday about what he described as a surge of public enthusiasm regarding science.

"It's not just, 'This is science, let me learn about it," the StarTalk host explained. "It's that there is a culture that thinks about science and likes science that is rising up in this country. The geekosphere led that."

"The richest person in the world is the patron saint of nerds -- Bill Gates," he said. "So the world is different because of this. Because we only enter the future on the intellectual capital brought to this world by the geekosphere."

While deGrasse Tyson did not confirm whether he is going to appear in the upcoming film Batman vs. Superman, he did give Stewart his take on both characters, saying that Batman reports to Commissioner Gordon in Gotham while Superman is bound by the wishes of his biological father, Jor-El. (He did not, however, mention Superman's experience being raised by Jonathan and Martha Kent in Kansas.)

"It's no one we know. It's no one we have any insight into. He just behaves in whatever way he wants," deGrasse Tyson said of Superman. "And so at the end of the day, what might matter is the public reception of the superhero's conduct. If Batman executes our wishes in the city, and Superman does what the hell he wants, that's a conflict."

"You cannot be a guy in a leotard and just be human," Stewart replied. "Superman can get away with it. But Iron Man figured something out, which is, 'I should wear iron, and not a leotard.'"

deGrasse Tyson then recalled for the audience that Stewart -- a chemistry major in college -- was a guest on the original radio version of StarTalk.

"It reveals the fact that science manifests even in our cherished pop culture institutions," deGrasse Tyson said of his program.