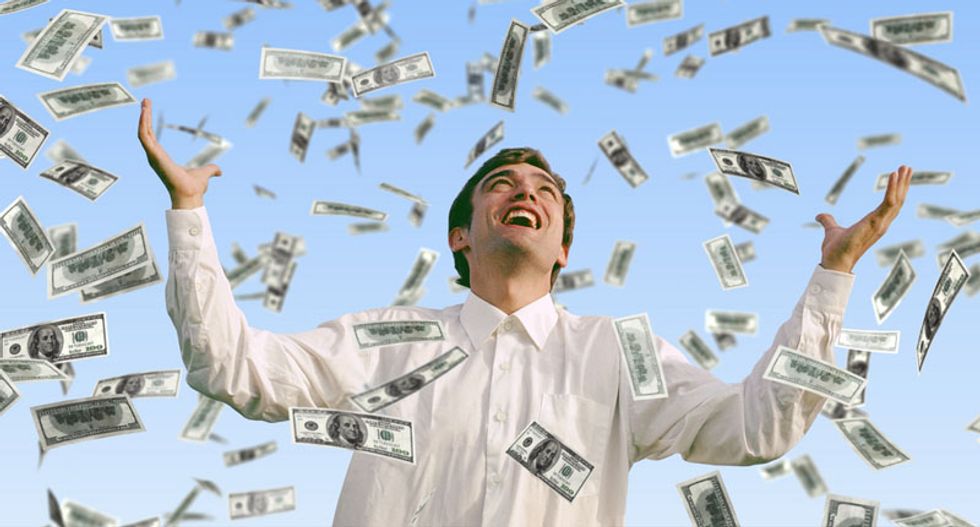 Money raining down on a man (Shutterstock)

At the current pace of donations, the owners of a small pizza parlor in Indiana who stated they wouldn't cater same-sex functions will be millionaires by Easter.

A fundraising page set up by a conservative news website on Wednesday has already raised more than $725,000 for Memories Pizza in the small town of Walkerton -- home to little over 2,000 people.

Lawrence Billy Jones of The Blaze created the fundraising page on Go Fund Me after co-owner Crystal O’Connor told Blaze TV host Dana Loesch that they had temporarily closed the business because of a furious backlash.

"The intent was to help the family stave off the burdensome cost of having the media parked out front, activists tearing them down, and no customers coming in," Jones explains on the fundraising page. "Our goal was simply to help take one thing off this family's plate as the strangers sought to destroy them. But other strangers came to the rescue and the total just keeps going up."

"I think it would just be fabulous if this GoFundMe donation number hit three-quarters of a million dollars. Right now, it's even more than I thought," he said on his radio show. "Just ram it down these people's throats. Get them up to $750,000!"

"They're a little pizza store, not bothering anybody, not threatening anybody, not doing anything but just living and breathing and trying to serve their community. The next thing you know, they are the focus of evil in a bigoted, homophobic country? Not so fast! The people of this country are rising up," Limbaugh said.

The backlash against Memories Pizza began after owners Crystal and Kevin O'Connor told a local news station that they supported Indiana's controversial Religious Freedom Restoration Act because they believed they had a right to deny services to same-sex couples.

"If a gay couple came in and wanted us to provide pizzas for their wedding, we would have to say no," Crystal told ABC 57's Alyssa Marino.

The story quickly exploded, and Memories Pizza's social media profiles were flooded with complaints, jokes, and threats. Crystal said the business has also been the target of threatening telephone calls.

ABC 57 reported that people from across Indiana and neighboring states have visited Walkerton to show their support for Memories Pizza.

“These people are trying to make a living, but they have Christian convictions that no one should have the right to take away from them. The government doesn't have a right to do that. No one does," said Pastor Ken Bilsborrow of Michigan.