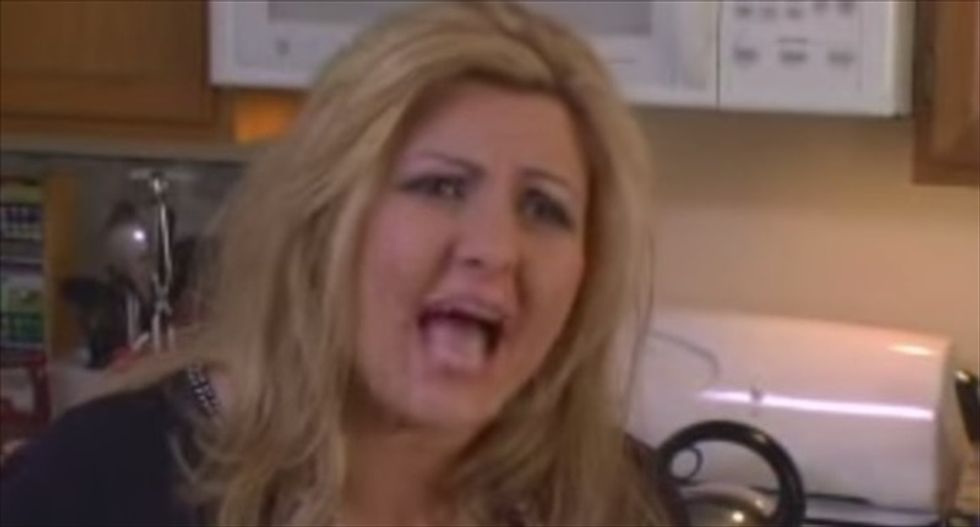 Nevada state Assemblywoman Michele Fiore was forced to apologize after her outburst toward a fellow Republican on Tuesday when he raised concerns about a bill she introduced, Wonkette reported.

"Mr. Speaker, can you stop this circus with the Assemblyman from District 19?" Fiore asked, before telling Assemblyman Chris Edwards directly, "Could you just sit your ass down and be quiet."

Assembly Speaker John Hambrick quickly ruled that Fiore was out of order, before ordering a brief recess. Fiore subsequently apologized to her colleagues for the remark.

The debate centered around Assembly Bill 408, which would have required the federal government to obtain permission to use any public land in the state. As Reuters reported, county commissions would be allowed to hand out permits for the land to be used for commercial purposes.

But Edwards observed on Tuesday that the state Legislative Council Bureau found Fiore's proposal to be unconstitutional.

"I do have a lot of problems wondering why we're setting up a separate fund for some purposes for the attorney general to do some kind of business that seems to violate the Supremacy Clause," he said. "Which is kind of strange, since I know [Fiore] has great respect for the Constitution and our federal system."

Fiore, a Tea Party Republican, snapped at Edwards after he said said the bill could lead to "somebody not saying nice things about you in his little blog."

Edwards later told the Reno Gazette-Journal that he was "very shocked" by Fiore's actions.

"There was no cause for that," he said. "My questions were completely directed at the policy of the bill and I was just looking for an answer. She should have just given me an honest answer. If anybody was getting snippy, it was her."

However, another GOP Assemblyman, John Ellison, said Edwards was "egging on" Fiore throughout Tuesday's session.

"I told one of [Edwards'] friends, 'You better go talk to him because this thing is going to blow up,'" Ellison said. "I knew what was going to happen. That's why I went over to talk to his best friend and said, 'You've got to calm him down.'"

The Las Vegas Sun reported that Fiore's bill was rejected in a 34-8 vote.

The measure had already drawn the support of anti-government rancher Cliven Bundy. Last year, Fiore backed Bundy in his standoff with federal authorities, saying the Bureau of Land Management trumped up accusations that Bundy refused to pay grazing fees for years.

Watch footage of the debate, as posted by Wonkette on Thursday, below.