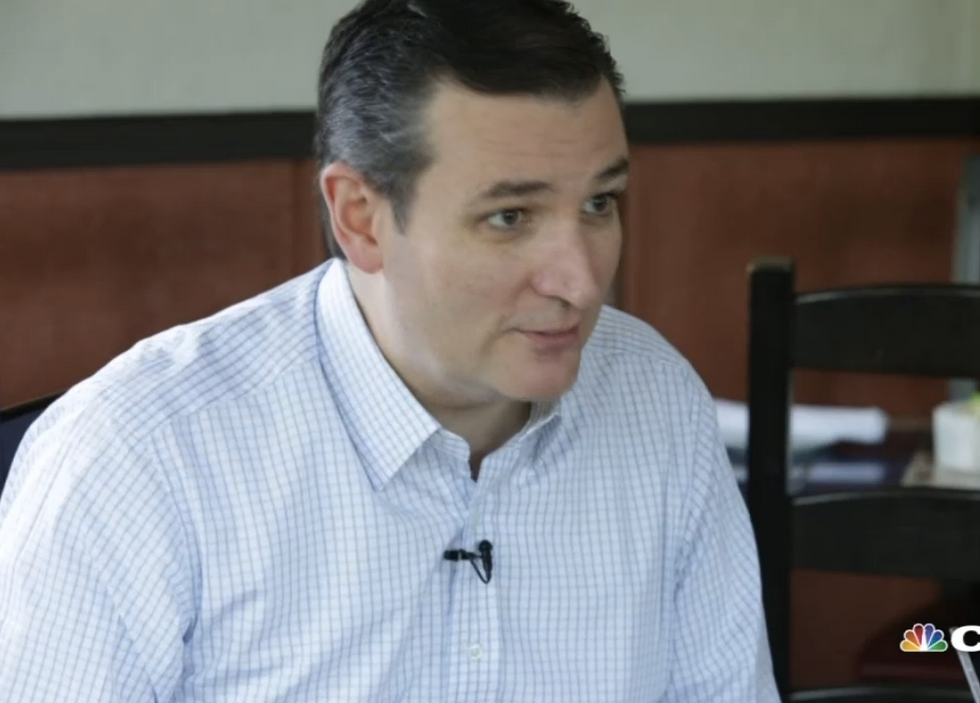 In an interview with CNBC's John Harwood, nascent Republican 2016 presidential candidate Sen. Ted Cruz (R-TX) said that his reputation as a "wild-eyed lunatic" is an invention of the liberal media, which is bent on smearing him through the use of "yellow journalism called PolitiFact."

According to Mediaite, Harwood pressed Cruz, asking him why people should support him when the facts he uses to bolster his points don't match up with the truth.

"You’ve said a few things that don’t necessarily comport with the facts," said Harwood. He quoted a statement by Cruz asserting that there are "125,000 I.R.S. agents, [so] send ‘em to the border.”

"Why shouldn’t somebody listen to you and say, 'The guy’ll just say anything -- doesn’t have to be true?'" Harwood asked.

"There is a game that is played by left-wing editorial writers," Cruz said. "It’s this new species of yellow journalism called PolitiFact. Colloquially I was referring to all the employees as agents. That particular stat is in a joke I used. So, they’re literally fact-checking a joke. I say that explicitly tongue in cheek."

Cruz appears to be confused. PolitiFact is a nonpartisan fact-checking agency that is an offshoot of the editorial board of the Tampa Bay Times. Cruz's comments would lead one to believe that he thinks PolitiFact is a cross-publication wire service or a social medium like Twitter.

Tina Nguyen at Mediaite found the exact quote that Harwood was referring to with audio in the Concord Monitor, a newspaper from primary state New Hampshire.

In the interview with Harwood, Cruz insisted that this was a joke.

"Now look, I say that somewhat tongue-in-cheek," he said, "but think about it for a minute. Imagine you’ve traveled thousands of miles in the blinding sun, you’re dripping wet, you swim the Rio Grande and the first thing you see is 110,000 IRS agents? You’d turn around and go home too.”

According to Nguyen, even in jest, Cruz's numbers are still wrong.

"Even if he defined 'agents' as 'all employees of the IRS,' the number is still off," she said. "The IRS had roughly 90,000 employees as of 2013, and is actually facing a staffing shortage."