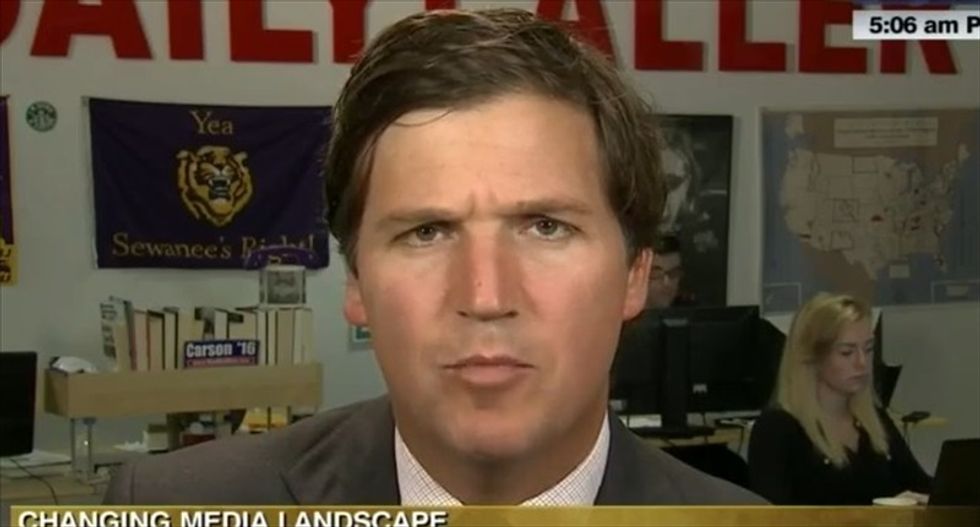 "They wanted me to denounce my brother, my only brother," Carlson told C-SPAN host John McArdle. "What am I supposed to do, disown him or call him a bad person for accidentally hitting reply? No, I'm not going to criticize a member of my family in public because some stupid Washington Post or something wants me to do that. I would die first. In no circumstances am I going to criticize my family in public, period."

The Carlsons came under criticism after de Blasio's spokesperson, Amy Spitalnick, revealed that Buckley called her a "whiny little self-righteous b*tch" who had "extreme d*ck-fright" in a message that was apparently only intended to go to Tucker.

The Caller head and Fox News contributor told McArdle that "for some reason" he copied his brother on a message telling Spitalnick she was being "whiny and annoying" in calling for a correction from his website.

"He wrote back a pretty nasty response," Tucker told McArdle, without mentioning the actual insults his brother used. "He accidentally hit reply all, and sent it back to her. So she, recognizing a publicity opportunity, sent it to all these websites that printed it. All of a sudden, I was a misogynist because my brother wrote some mean email to this chick."

MSNBC host Chris Hayes ripped Carlson and his "bottom of the barrel website" after the incident, saying, "Aren't these guys just adorable?"

On Thursday, Tucker Carlson mocked Washington Post media columnist Erik Wemple for writing about the exchange, calling him "total mediocrity and a moron and kind of a creepy finger-sniffer-type character." Wemple responded by saying, "Total mediocrity always beats partial mediocrity" and reporting that neither Carlson had apologized to Spitalnick for the insulting emails.

Carlson's latest response was also slammed by Salon politics writer Katie McDonough, who mocked him for saying he would "rather die" than address his brother's actions.

"Like, saying the words 'Whether the message was intentionally sent to her or not, that was an inappropriate email, and no one deserves to be spoken to that way' would literally kill him," McDonough wrote. "He would actually drop dead. Which basically makes everyone who thought an apology was the appropriate response guilty of attempted murder. We should be ashamed of ourselves."

Watch Carlson's remarks, as posted by Media Matters, below.