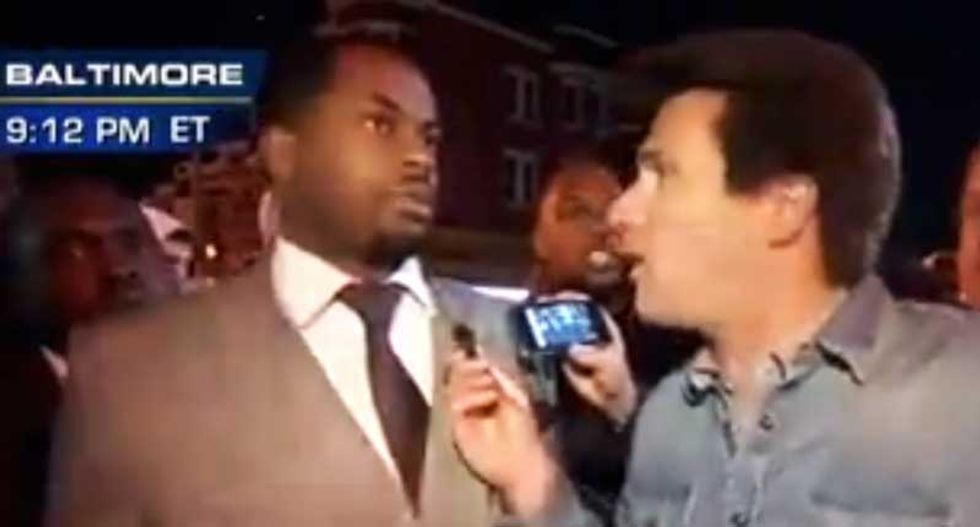 Over the past 24 hours, Maryland politicians have been referring to angry citizens as "thugs" after the mostly peaceful protests over 25-year-old Frieddie Gray's death became violent yesterday.

Much of the media attention has been focusing on the destruction of property, which was what Fox News reporter Leland Vittert wanted to discuss when he approached City Councilman Nick Mosby on the street last night. Mosby would have none of it.

When Vittert asked Mosby what the looting means for Baltimore, Mosby replied, "What it is is young folks of this community showing decades old anger, frustration, for a system that's failed them. I mean, this is bigger than Freddie Gray. This is about the socio-economics of poor, urban America.These young guys are frustrated, they're upset and unfortunately, their displaying it in a very destructive manner. When folks are under-educated, unfortunately, they don't have the same intellectual voice to explain it the way other people are doing it and that's what we see through the violence today.”

Vittert appeared to have taken none of this in, and then asked Mosby about the looting and a burning store near them and said, “Is that right?”

The councilman gave a poised response.

“Is it right for people to loot? No,” he said. “I think you’ve missed everything I’ve tried to articulate. What I’ve said is that everything that has happened is wrong. The violence is wrong. That’s never acceptable, understanding that there’s a symptom of something that’s going on here, and what I’m trying to articulate to you is that when you look at communities like this in urban America, lack of education, lack of commercial development, lack of opportunities, it’s the socio-economics of it. It has nothing to do with west Baltimore or this particular corner in Baltimore. This can erupt anywhere in socio-economic deprived America.”

He went on to criticize the media for its lazy analysis of what is happening in his city before cutting his interview short with the reporter.