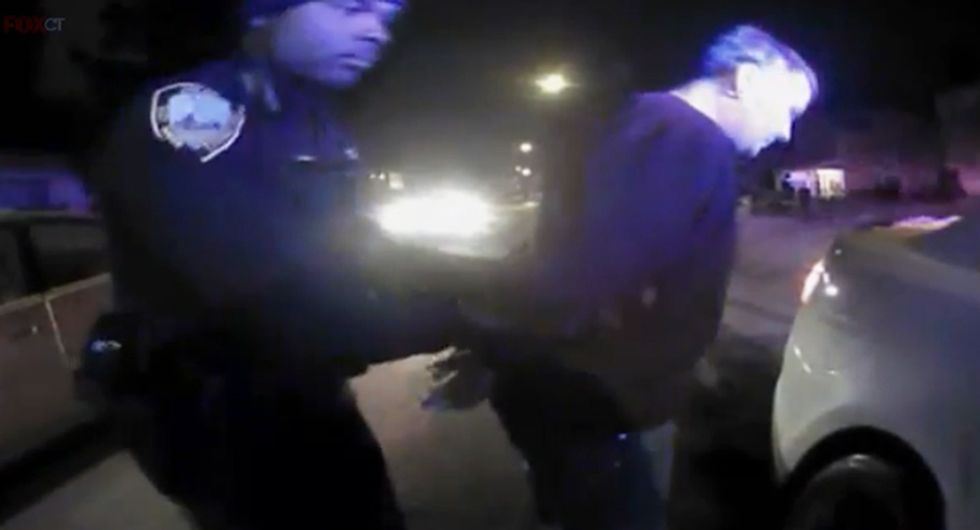 Brandon Locke was stopped by police officers responding to a 911 call in East Haven, Connecticut on the early morning of February 8, with two of his friends and his girlfriend in the car with him. According to the caller, Vincent Esposito, somebody in his neighborhood was impersonating a police officer.

“Hi, it’s a big emergency,” Esposito said to the dispatcher in a recording obtained by Fox CT, “People are pretending they’re cops and they’re trying to get me to them… and beat me up or roll me… one or the other.”

Esposito then described the car and occupants to the dispatcher, saying "They’re in a silver accord or something like that…. there’s four in the vehicle… Puerto Rican people… and they don’t look like nice people.”

However, Locke was driving a Honda Civic, and nobody in the car was Puerto Rican.

Esposito then asked the dispatcher, “If they come back should I throw a cinder block into their car?” with the dispatcher responding, “No, no, don’t do anything like that. If you see them again just make sure you tell me.”

Locke was pulled over a couple blocks away as at least six officers responded to the scene.

In an interview with FoxCT, Locke denied that he or any passenger in his car said they were police officers.

“Not even jokingly,” he said.

East Haven Police officer Sgt. Emerman told FoxCT that the officers did not find any police uniform, badge, or gun on Locke that could make him look like a police officer.

Despite that, Locke, who had no previous criminal record, was arrested and booked into jail as his friends and his girlfriend looked on.

When asked what was the probable cause for Locke’s arrest by FoxCT, Sgt. Emerman said that the officers “really believed that something wasn’t adding up with their story and that the complainant had made a reliable complaint.”

The arrest was caught on the body cameras worn by the arresting officers, which supported the statement that Locke was not dressed as a police officer. Two police officers were also caught on tape to describe Esposito as “functioning drunk.”

Locke was charged with impersonating the police, but the felony charges were dropped later. However the arrest cost him $2,000 for an attorney and bail, and his mug shot was in the local media and still lives on online, perhaps permanently.

“You can’t put a price on me waking up and seeing me on the news in the morning going against a felony. A felony’s a big word, that’s a huge word,” Locke told FoxCT about his frustration. He decided not to sue the police department or Esposito.

Watch the video below from FoxCT: