You'd be surprised who the outside agitators in Baltimore really are 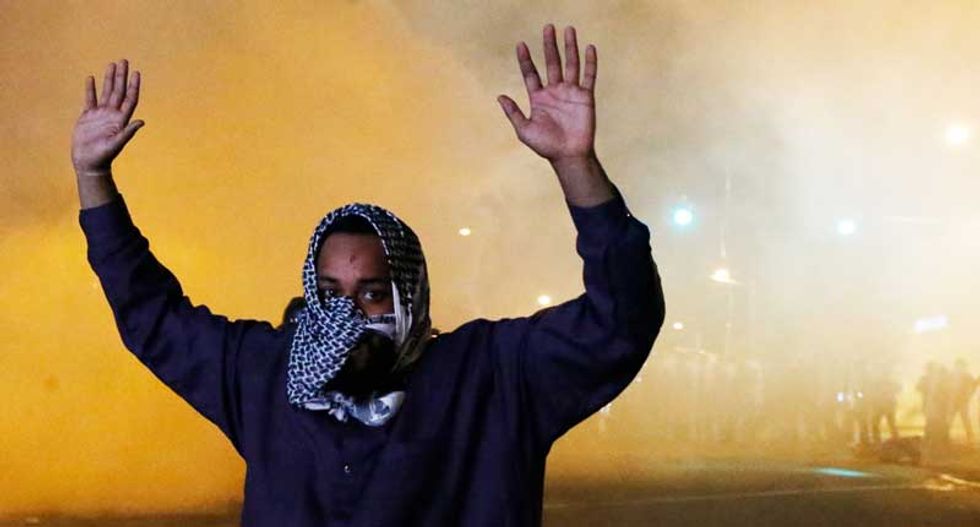 A protester raises his hands as clouds of smoke and crowd control agents rise shortly after the deadline for a city-wide curfew passed in Baltimore, Maryland April 28, 2015, as crowds protest the death of Freddie Gray, a 25-year-old black man who died in police custody. (REUTERS/Adrees Latif)

On Monday, the country watched as a band of outside agitators descended on the streets of Baltimore, attacked locals with blunt force, intimidated innocent bystanders, and even threw rocks at native residents. Every day, these gun-toting rogues come from as far as New Jersey and Pennsylvania to intimidate the good people of Baltimore, forcing communities to cower under the threat of violence. The agitators are known for their menacing dark blue garb, hostile behavior and gangland-style codes of secrecy and silence. Though many of these ruffians have attempted to conceal their identities from their victims, they can be easily spotted by the badges that signify membership in the widely feared Baltimore Police Department.

According to data posted on the city of Baltimore’s OpenBaltimore website in 2012, over 70 percent of Baltimore Police Department officers live outside city limits, with at least 10 percent living over state lines, in places as far away as New Jersey and Pennsylvania. By contrast, almost all of those arrested in ongoing protests sparked by the police killing of the unarmed Baltimorean Freddie Gray reside firmly within the city. These facts were apparently lost on Baltimore Mayor Stephanie Rawlings-Blake when she blamed “outside forces” for all the looting of local businesses and attacks on cops. Similarly, the Baltimore Police Department claimed that "outside agitators continue to be the instigators behind acts of violence and destruction,” even as it conceded in the same statement that “the vast majority of arrests reflect local residency.” No evidence of outside agitation was produced by the mayor or the police, and none was demanded by much of the media covering the ongoing troubles.

This week’s scenes of mostly white cops battling the African-American youth of Baltimore captured a legacy of deeply entrenched racism that stretches back to Maryland’s Antebellum days. Though Maryland ended the slave trade in 1783, over 40,000 slaves remained in bondage in its Eastern Shore, near the border of Virginia, until Emancipation Day. When the Sixth Massachusetts Militia marched through Baltimore on April 19, 1861 on its way to protect Washington DC from advancing Confederate forces, the Union troops were attacked in the center of town with rocks, bricks and even pistols by local Southern sympathizers. Maryland’s last recorded lynching of a black man occurred in the town of Princess Anne on the Eastern Shore in 1933, when a thousand whites dragged assault suspect George Armwood from his jail cell, tortured him, hacked his ear off and hung him from a tree. It was the 33rd documented lynching in the state since 1882.

Gerald Horne, a professor of history and African American Studies at the University of Houston, sees the legacy of slavery as an underlying factor in the policing of majority black cities like Baltimore. “The origins of the urban police department lies precisely in slavery,” Horne remarked in a recent interview with The Real News founder Paul Jay. “That is to say, slave patrols that were designated to interrogate, to investigate Africans who were out and about without any kind of investigation. You fast forward to 2015 and you still see more than remnants of that particular system.”

The Gilmor Homes area where Freddie Gray was violently apprehended and later killed by Baltimore police officers is one of the city’s most heavily policed areas. Eddie Conway, a local civil rights activist who served 43 years in prison after a dubious conviction for killing two cops, explained in an interview with Democracy Now! that Gilmor Homes is “a ‘broken windows’ police area in which people and residents in that area are arrested for sitting on their own steps. They are loitering in their own community, on their own steps, and they're harassed constantly.”

“[Cops] won’t let us go nowhere,” one young Gilmore Homes resident complained to The Real News, “They’ll tell us, ‘Move, we gotta go here, you gotta move off there.’ We ain’t doing nothing!”

When Paul Jay relocated The Real News operations to Baltimore in 2013 and initiated a series of roundtable discussions with local cops, he learned about the hostile racial attitudes white officers were importing into the city. “I’ve talked to some black cops in Baltimore and one of them told me that in the locker room,” Jay said, “and when they’re getting ready to go on their shift, some of the white cops joke…’Time to go back to work in the zoo.’”

While the Baltimore Police Department recruits its manpower outside city limits, its leadership is regularly junketed to training tours in Israel, the occupying power whose hyper-militarized settlers act as some of the Middle East’s most aggressive outside agitators. In September 2009, members of the Baltimore PD “toured [Israel] and met with their Israeli counterparts to exchange information relating to best practices and recent advancements in security and counterterrorism,” according to the trip’s sponsor, Project Interchange. A separate Israel tour organized by the neoconservative Jewish Institute for National Security saw members of the Baltimore PD “begin the process of sharing ‘lessons learned’ in Israel with their law enforcement colleagues in the United States.”

Back in Maryland, the rate of citizens killed by police officers is skyrocketing. A report by the ACLU has found that 109 people died after encounters with Maryland police between 2010 and 2014, that almost 70 percent of those who died were black, and that over 40 percent of them were unarmed. In Baltimore alone, the city was forced to pay $5.7 million in lawsuits by suspects who accused police officers of beating them brutally and without cause.

Even after the National Guard vacates the streets of Baltimore and the state of emergency is lifted, vast swaths of the city will remain under occupation. Rather than return to a deadly status quo, the city could start answering the crisis by enacting residential requirements that force police officers to live in the neighborhoods they patrol.

Outside agitators have caused enough trouble in Baltimore. It’s time to send them back where they came from.