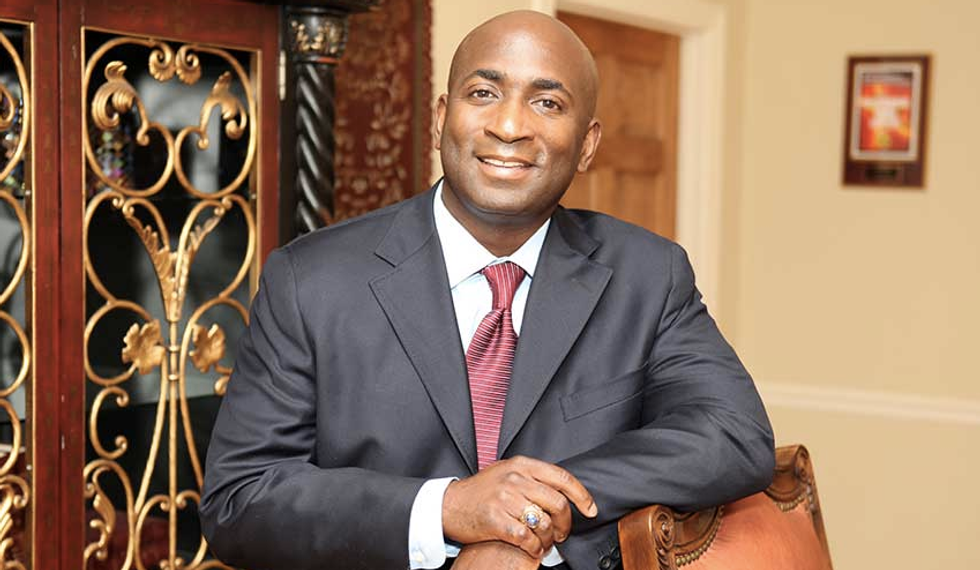 Accompanied by his family on Mother's Day, former State Senator and County Commissioner Myron Penn (D-AL) picked up miniature confederate flags from the graves of soldiers on city property in Union Springs, Alabama. The confiscated flags now sit in a bag at City Hall, awaiting retrieval from their original owners.

Penn, who is black, tells WSFA he removed the offending flags with the impressions of his four-year-old son in mind: "The reason why we picked them up is because the image of the flags in our community, a lot of people feel that they're a symbol of divisiveness and oppression... I would think that no one in our community would have a problem with... my actions at all."

Apryl Marie Fogel, the publisher of Alabama Today, believes Penn's actions in the public cemetery were tantamount to "disrespecting history." In an opinion piece on Sunday, Fogel asserts that, "Penn was wrong but he was more than that. What he did appears to have broken the law." As supporting evidence, Fogel points out that it is illegal to deface gravestones.

Moreover, Fogel insists there's nothing in the public display of confederate flags for Penn to have been offended by in the first place. "Experts have long noted the flag was never intended to be a symbol of racism and slavery," Fogel charges. The former Republican congressional staffer goes on to describe the confederate flag as "a symbol to honor the sacrifice of patriots who were willing to die to protect this country and make sure it remained as the founders intended, as well as the history of the south. Not racism."

Meanwhile, a spokesperson with a local Sons of Confederate Veterans chapter tells WSFA he's "considering legal action" against Penn for removing confederate flags from the Union Springs cemetery. Another organization mobilizing against Penn is the Defenders of the Confederate Cross, Alabama Division.

The latter group is planning a protest -- advertised on Facebook here -- in Union Springs on June 19 and June 20. "A local Attorney removed flags off of Confederate Solders graves and the police did nothing," the event description reads. "We will flag and rally for our heritage and fight back!"

In a statement, the Defenders of the Confederate Cross notes: "While we DO NOT CONDONE acts of violence against any one, this has nothing to do with race, slavery, or oppression. This has alot to do with people walking on and disregarding Confederate heritage. In 1958 congress ruled confederate veterans are AMERICAN veterans and D.C.C. will see that they are treated as such. We will replace the flags that were illegally removed and keep a ever present eye on all Confederate Veterans graves!"

WSFA reports that Penn's Mother's Day actions have attracted the attorney "death threats and hate mail" as well as calls for arrest and disbarment.

But Penn tells WSFA that his vision for his community is "one of inclusion. We don't want to hurt anybody. We don't want to remind anyone of an oppressive past. We want to move our community forward economically and socially. I did this not just for my child, but for all the children and all the parents who would want to do the same kind of thing to make sure that they do not grow up in a community that does not appear to be divided.”