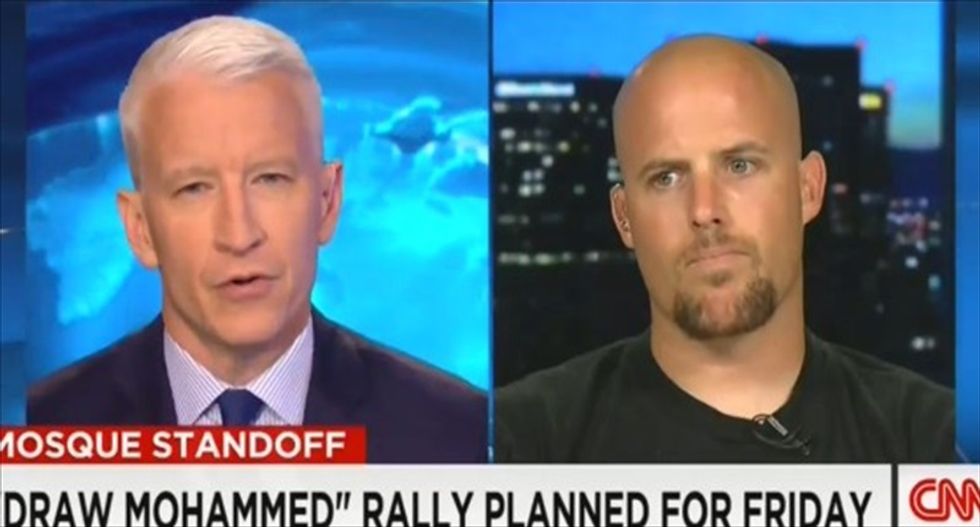 CNN host Anderson Cooper pushed the ex-Marine Corps member on Thursday who organized what he insists is a non-violent protest at a Phoenix mosque supporting "freedom of speech."

"You don't think bringing guns to a mosque while families are praying inside, wearing t-shirts that say 'F Islam' and shouting whatever it is you're going to shot at them, as they come and as they go -- you don't think that's promoting violence at all?" Cooper asked Jon Ritzheimer, who has promoted the event by announcing a "Draw Muhammed" contest, which would violate Islamic teachings banning depictions of the Muslim prophet.

"I think the whole thing -- the cartoon contest, especially -- I think it's stupid and ridiculous," Ritzheimer conceded. "But it's what needs to take place in order to expose the true colors of Islam."

Ritzheimer, who has also promised to sell shirts saying "F*ck Islam" and encouraged attendees to bring firearms, scoffed at the criticism surrounding the rally, telling Cooper that "some would probably argue that the signers of the Declaration of Independence was a bad idea back in their day."

"So you're comparing yourself to the signers of the Declaration of Independence?" Cooper asked.

"Yeah, I don't wanna live in fear. I shouldn't have to live in fear," Ritzheimer responded, adding that he and his family have received "credible threats" to their safety.

Cooper also pressed Ritzheimer on his service, pointing out that he was helping support an Islamic government while serving in Iraq.

"If you hate Islam, how do you justify having done that?" the host asked.

"The core values of Islam is what I really hate," Ritzheimer said, before Cooper repeated the question.

Cooper's other guest, former FBI and CIA official Philip Mudd, argued that events like the one Ritzheimer has planned play into the arguments groups like Islamic State make depicting what they call a war between Western countries and the religion.

"Aren't you playing into their hands?" Cooper asked Ritzheimer, following up on Mudd's point. "Isn't this exactly the reaction and the message that terrorists want?"

"So you're playing into ISIS and al Qaeda hands," Cooper said. "Do you feel good about that?"

"I'm just doing what I have to do to make sure that my children have a good future," Ritzheimer replied.