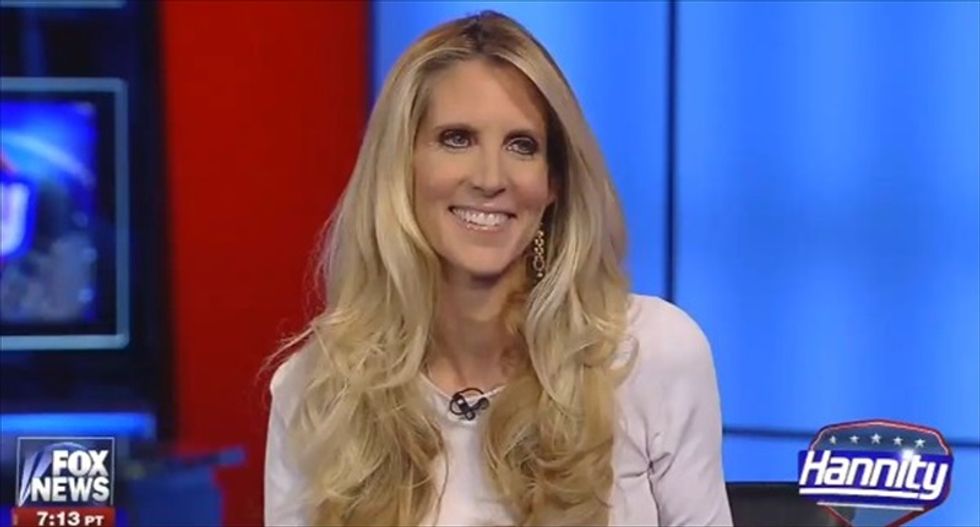 Conservative author Ann Coulter argued to Fox News host Sean Hannity on Monday that there is no such thing as a peaceful protester in Baltimore.

"I want a milk carton ad for 'Has anyone seen a peaceful protester in Baltimore?'" Coulter said. "As if workaday blacks are rushing out to protest Freddie Gray? No they aren't."

Neither Coulter nor Hannity mentioned that the rioting in the city late last month was both preceded and followed by multiple non-violent demonstrations.

Coulter went on to say that progressives were wrong in calling for reforms regarding police use of force. She accused police critics of trying to undo tactics that had made cities safer.

"You remember New York pre-Giuliani. I remember it," she said. "Oh my gosh, this nonsense about, 'Oh, so many blacks are in prison.'Well how did they get there? In addition to the peaceful Baltimore protester I want to put on a milk carton, -- 'Have you seen this?' -- I want to see the innocent person in prison."

She did not mention the upswing in recent years of wrongful convictions that have been overturned, including the case of two New York City men who received $9 million last November after their murder conviction was overturned.

Instead, both she and Hannity accused First Lady Michelle Obama of following President Barack Obama's lead in criticizing racism as a means to deflect criticism for both their own failings.

"They've decided, between Ferguson and Baltimore and Trayvon and the Cambridge police, he is taking on all these high-profile racial cases," Hannity said of the president. "Now she's decided to make a statement on the heels of him making a statement about Baltimore. Why are they doing it now?"

Coulter insisted that, while a "predator class" of black children born out of wedlock was to blame for many problems in the black community, it was easier for the Obamas to "gin up" their supporters by attacking racial prejudice.

"Yes, America does owe black America for slavery, for the Democratic policies of Jim Crow," she said. "I think we're making it up now. When you're getting admitted to Princeton when you can't read, is that enough yet?"

"In other words, there are different standards, but you have to read to get into Princeton," he replied.

Watch the interview, as aired on Fox News on Monday, below.