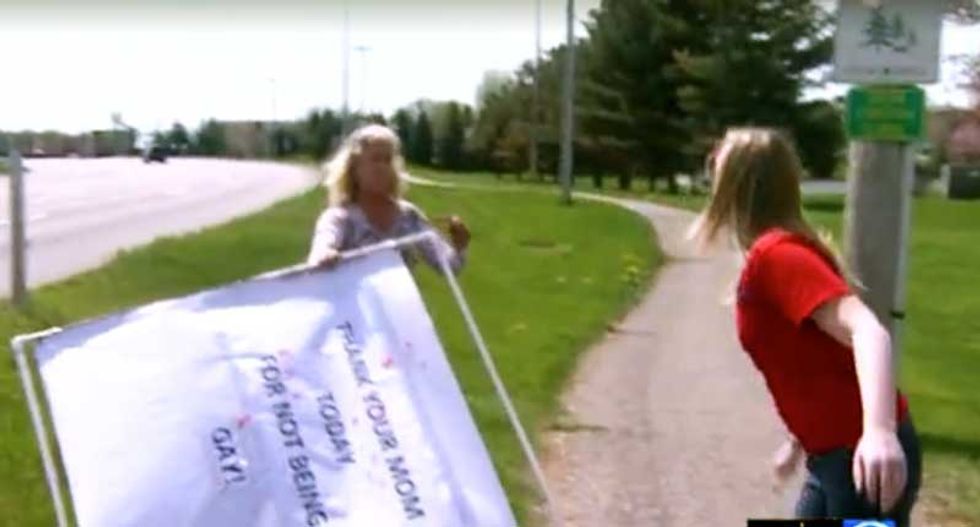 On Mother's Day in Grandville, Michigan, a woman stood at a busy intersection holding a sign that read, "THANK YOUR MOM TODAY FOR NOT BEING GAY." The other side of her sign began with "Warning!," followed by references to Bible verses, followed by the words, "WOE to those who cross it!" Social media noticed. Which prompted local news outlet Wood TV 8 to go down with their video cameras and see what was going on.

"And while we were there," a Wood TV broadcast reporter says dramatically, "the slushy was thrown."

Shortly after journalists arrived to check out what was up with the homophobic sign, a woman shows up and angrily hurls the remaining contents of her pink slushy directly toward the face of the sign-holder, one Christine Weike from Hopkins, Michigan.

The evident perpetrator of the slushy assault is named Jessica Prince.

Weike's face successfully drenched with slushy, a visibly angry Prince then throws the paper cup toward a grassy patch on the side of the highway and stomps off. But not for long. Prince notices Weite is pointing pepper spray at her.

Both middle fingers in the air, Prince challenges Weite: "Do it!"

"Take a step toward me and I will feel attacked," Weite says to Prince.

Prince then pouts and twists her fists around in front of her eyes in a display of mock crying.

Weite has previously called police about a teenage boy who disagreed with her views and made her feel uncomfortable. When cops showed up, Weite wanted them to arrest Prince, too.

"Can you leave the slushy part out? I don't want to go to jail," Prince says to reporters nervously.

According to Addicting Info, "No-one was injured during the exchange. Assault with a deadly slushie is most likely not a prosecutable offense."

After the "slushie incident," as Addicting Info calls it, other people showed up with signs of their own in a counter-protest against Weike.

One man, Zach Hoag, stood several feet apart from Weike, on the same corner of the same highway intersection, facing the same direction. Hoag's sign read: "But two moms can be FABULOUS"

"Love one another." Hoag tells Wood TV's film crew. "Two moms or two dads can love and nurture a child just the exact same way as a mother and father could"

Another man at the Grandville highway intersection carried a sign made from brown corrugated cardboard, with the following words written on it in black marker: "Thank Your Mom if You're not a BIGOT! 'Judge Not...'"

Addicting Info reports other people stood nearby with signs that read, "F*ck her. I disagree." and "I ❤ gays."

Thousands of people passed the sign-wielding protestors with differing views on gay marriage. Many drivers slowed down long enough for passengers to share their opinions.

"Truth is hate," Weike says to video journalists at Wood TV, "to those who hate the truth. And this is the truth. And they don't like it. And they label me a hater. And it's not that at all. I love 'em enough to tell 'em, 'you're on the wrong path.'"

Watch a protestor throw a pink slushy in the face of a woman holding a hateful sign on the side of a Michigan highway: