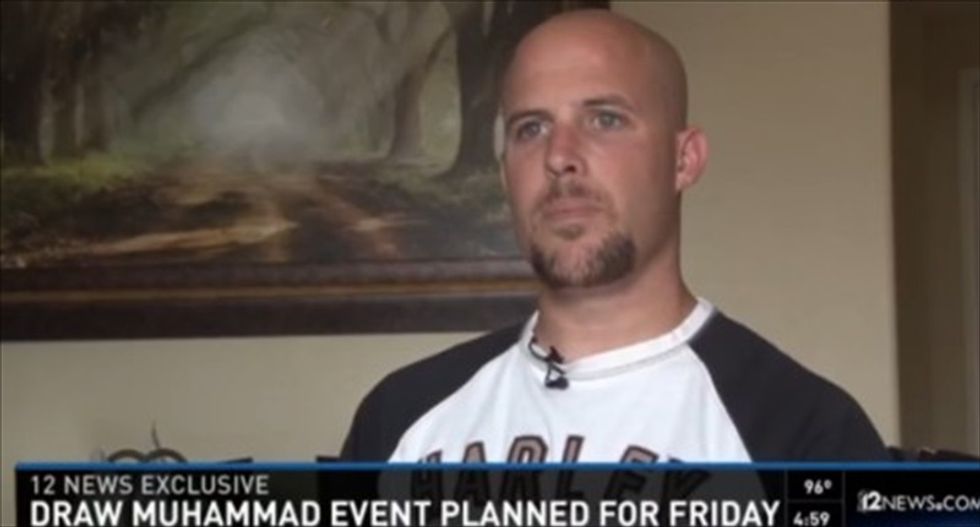 The organizer of an anti-Muslim protest in Phoenix insisted on Wednesday that his event was intended to be non-violent despite including the sale of a shirt saying, "F*ck Islam."

"I'm a Marine, and I am far from politically correct," Jon Ritzheimer told KPNX-TV. "I'm outspoken, and I've just had it."

The event, which is scheduled to be held on Friday outside a local mosque, will also include a "Draw Muhammed" contest similar to the one organized by conservative activist Pamela Geller in Garland, Texas earlier this month. Ritzheimer, a former Marine Corps member, said he intends for the gathering to be "about pushing out the truth about Islam."

The Bridge Initiative, a Georgetown University group researching Islamophobia, highlighted the event on its website earlier in the day, pointing out that Ritzheimer has also urged attendees to bring firearms.

"People are also encouraged to utilize there [sic] second amendment right at this event just incase our first amendment comes under the much anticipated attack," the event site stated. A screenshot of the the remark can be seen below.

The remark is a reference to Elton Simpson and Nadir Soofi, who were shot and killed by police while attempting to attack Geller's event. Both men reportedly attended services at the Islamic Community center of Phoenix, the site of Ritzheimer's protest, until 2010.

The center's current president, Usama Shami, said he has encouraged members to ignore Ritzheimer and his supporters, saying that they were not looking for an "intellectual conversation."

The Bridge Institute argued that Ritzheimer's rally is using free speech as a way to excuse "deep-seated animus" toward Muslims.

"The organizers have chosen to intentionally antagonize Muslims at their mosque by arriving en masse, insulting their religion to their faces, intimidating them with their weapons, and expecting that they quietly embrace all of this in the name of the First Amendment," the institute stated on its website.

Watch KPNX's report, as aired on Wednesday, below.