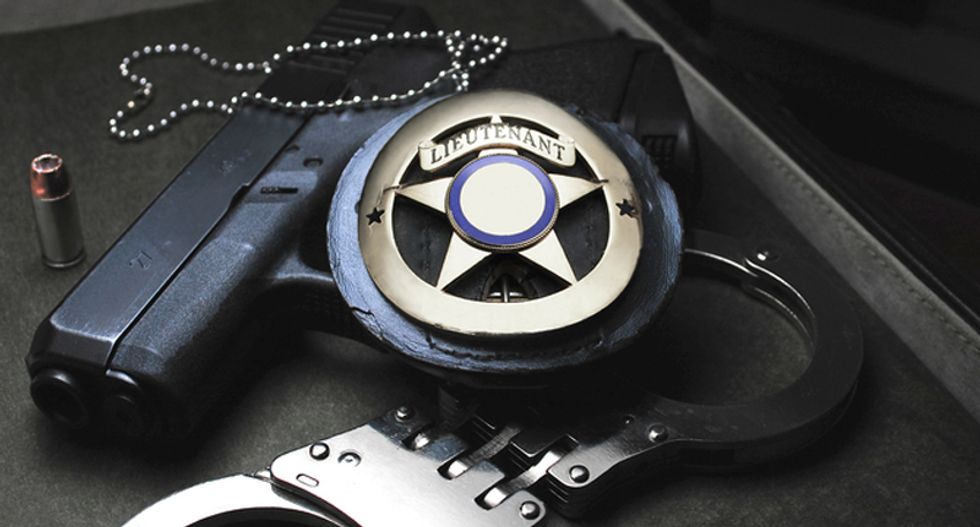 A minister, an aide to the attorney general of California and a purported Emmy winner could face up to a year in county jail, after they were arrested in late April for posing as members of a fictional police department supposedly tied to the Knights Templar.

Reverend Tonette Hayes, 56, Brandon Kiel, 36, and 46-year-old David Henry, Kiel’s father-in-law, claimed to be members of the Masonic Fraternal Police Department (MFPD). On its website, the group says it has existed for more than 3,000 years and has legal jurisdiction in 33 states and Mexico.

While none had legitimate law enforcement credentials, all three of those charged did apparently have strong ties to secretive societies with Masonic appearances. According to a 2014 story in the LA Watts Times , Henry and Kiel were members of Sir Brileys Knights of Luxor Knights Templars Grand Lodge AASR.

In their letter to police chiefs, the trio claimed 5,686 lodges were affiliated with their organization.

Henry, who was known as the Supreme Sovereign Grand Master David Henry X°, appeared in photos on the group’s Facebook page in flamboyant Masonic gear including a top hat, burgundy and gold cuffs and a traditional Masonic apron covered in symbols.

Kiel, who served as the RW Grand High Priest for the Lodge, also appeared in full regalia in a YouTube video of a Lodge event – in which Henry introduces Kiel by saying he will run for the US Senate in 2016.

Shirley Broadnax, grand secretary of the Golden State Eastern Stars, was skeptical that the Lady Jewel was a legitimate group.

“I know just about everything from coast to coast, and I ain’t never heard of that,” she said.

Both the Masons of California, the umbrella group for 60,000 masons in the state, and the Prince Hall Grand Lodge Masons, an offshoot organization of predominately African American men headquartered in Los Angeles, said that Henry and his group were unrelated to their organizations.

“Where they came from and where they are going, we have no idea,” said Prince Hall grand secretary Billy Harrington. “There is no such [police] order anywhere in the Prince Hall family.”

UCLA professor Margaret Jacob, an expert on Freemasonry, said by email that she had never heard of either Sir Brileys Knights or Lady Jewel of the Nile and “doubt[ed] very much they are part of established and recognized freemasonry”.

She added: “There have been these sorts of hoax groups, or rogue forms of freemasonry in many places and times.”

She gave the example of the Propaganda Due, commonly called P2, scandal in Italy in the 1970s, when a pseudo-Masonic lodge with well-connected members was accused of crimes and political corruption.

While the lore surrounding Freemasonry is deep and full of conspiracy theories, experts say that there have never been any rumors of a police force existing within it.

“I can’t imagine there is anything of the sort,” said Steve Bolluck, a professor of history at Worcester Polytechnic Institute in Massachusetts and the author of Revolutionary Brotherhood, a history of early Free Masons in America.

Prior to their arrests, none of the three had had run-ins with the law in Los Angeles, other than a drunk driving conviction for Kiel in 2007. In late January, the trio began sending letters to heads of local law enforcement agencies in southern California, announcing that Henry had been elected as Chief of the MFPD.

Soon after, Kiel began follow-up calls to those agencies, identifying himself as “chief deputy director” of the department and requesting meetings to offer information on how the agencies could potentially work together.

One of those meetings, with captain Roosevelt Johnson of the Santa Clarita Valley sheriff’s station, raised red flags for real law enforcement. Henry and his cohorts were unable to answer “basic questions about MFPD’s jurisdiction and overall department mission”, according to a release from the sheriff’s department. Kiel used his department of justice business card at the meeting.

Kiel has served as a deputy director of community affairs at the California department of justice since July 2013, working as a low-level liaison for Kamala Harris, who is currently running for US Senate . He has been placed on administrative leave.

A YouTube video posted by Henry purportedly shows him winning a local Emmy award in 2002 for producing a broadcast news story for Fox11 in Los Angeles. During that video, he thanks Geraldo Rivera and Ice-T for being “behind my career”. Other sources identify Henry as a private investigator and a security guard.

Hayes founded and ran the Political and Clergy Council Organization (PCC), dedicated to “holding ministers and politicians accountable for their actions”, according to her Twitter site.

“The church, politicians and the lawmakers have let the people down, the communities feel they are not being heard, so I consider this organization as an order from God given only to me,” Hayes told the LA Sentinel in 2013.

“God has taken away any fear, given me the necessary tools, opened doors that are shut to others and given me the authority and power to move forward … Until He says it is over, it is not over. Amen!”

She also claims to serve as a minister at the Israel Missionary Baptist Church in Los Angeles. Church staff did not recognize the name.