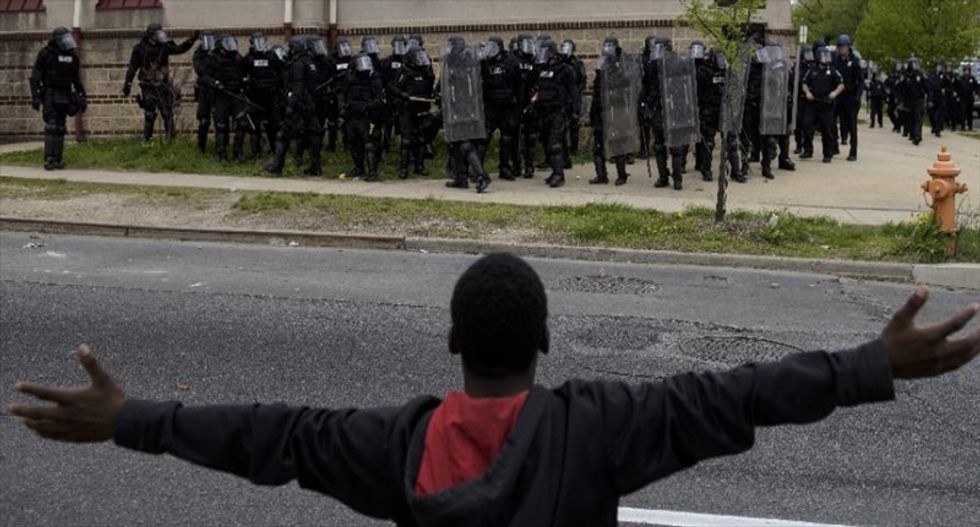 A protestor gestures before riot police on April 27, 2015 in Baltimore. Photo by Brendan Smialowski for Agence France-Presse.

Five days after rioters torched buildings and looted stores in an outbreak of violence over the death of a black man who was fatally injured in police custody, Baltimore's bars and restaurants are hurting.

With police and National Guard troops enforcing a 10 p.m. nightly curfew that will continue over Saturday night, businesses in all corners of the city are forced to close early and are seeing fewer customers during the shortened hours they are open, business owners said on Saturday.

"It's just devastating, financially," said Ron Furman, owner of Max's Taphouse, in the city's Inner Harbor district, which is popular with tourists. "By law, we usually close at 2 a.m., and now we're kicking people out at 8:30. But it's not just that. It's that people aren't coming downtown. It's a ghost town."

Traffic was slowest on Tuesday and Wednesday when many downtown office workers chose to work from home or left work early out of fears of a repeat of Monday's rioting, business owners said. Some bar and hotel owners reported a pickup in business on Friday night, though they were still handling far fewer customers than usual.

The city's prosecutor brought criminal charges on Friday against the six police officers involved in the arrest of 25-year-old Freddie Gray, who died on April 19 a week after sustaining injuries in police custody.

The curfew, which Democratic Mayor Stephanie Rawlings-Blake imposed on Tuesday, orders residents to remain off the city's streets from 10 p.m. to 5 a.m., with nonessential businesses closed during those hours. While people are allowed outside if they are traveling to or from work, many businesses have opted to shut their doors at 9 p.m., to give customers time to return home.

Maryland's governor, Republican Larry Hogan, who earlier this week declared a state of emergency in Baltimore, said on Friday the curfew has taken a toll on business.

"What I'm (doing) down here tonight is just checking in with these businesses that are really hurting, trying to get back to normal," Hogan said as he stepped out of Vaccaro's bakery downtown.

Major General Linda Singh, commander of the Maryland National Guard, urged residents on Saturday to be patient and peaceful.

"The most important thing is your safety, the safety of all the infrastructure that's here, because without that we have no Baltimore," said Singh.

Some hotels were hit by cancellations of bookings and three conferences that would have drawn thousands of visitors were canceled, though some of those rooms were filled with the flood of news media into the city.

"The industry as a whole, in terms of hotels in Baltimore, are taking a little bit of a hit," said Mario Corrado, Jr., general manager of the Admiral Fellin hotel. "A lot of people are hesitant to come."

After facing criticism early in the week that police were slow to react to unrest on Monday, city officials said they planned to hold off on lifting the curfew until they were certain violence would not recur.

Furman spent the first few nights of the week sleeping on his office floor. He said that even when the curfew lifts, he will be wary about how late he stays open.

"If I feel that it's safe for my employees to go home, if I feel like they're going to arrive home and their homes are going to be there, then business as usual," Furman said. "If not, then I don't know. We’ve got to be fluid."

(Reporting by Scott Malone. Additional reporting by Ian Simpson in Baltimore, and Mary Wisniewski and Fiona Ortiz in Chicago; editing by Frances Kerry and Matthew Lewis)